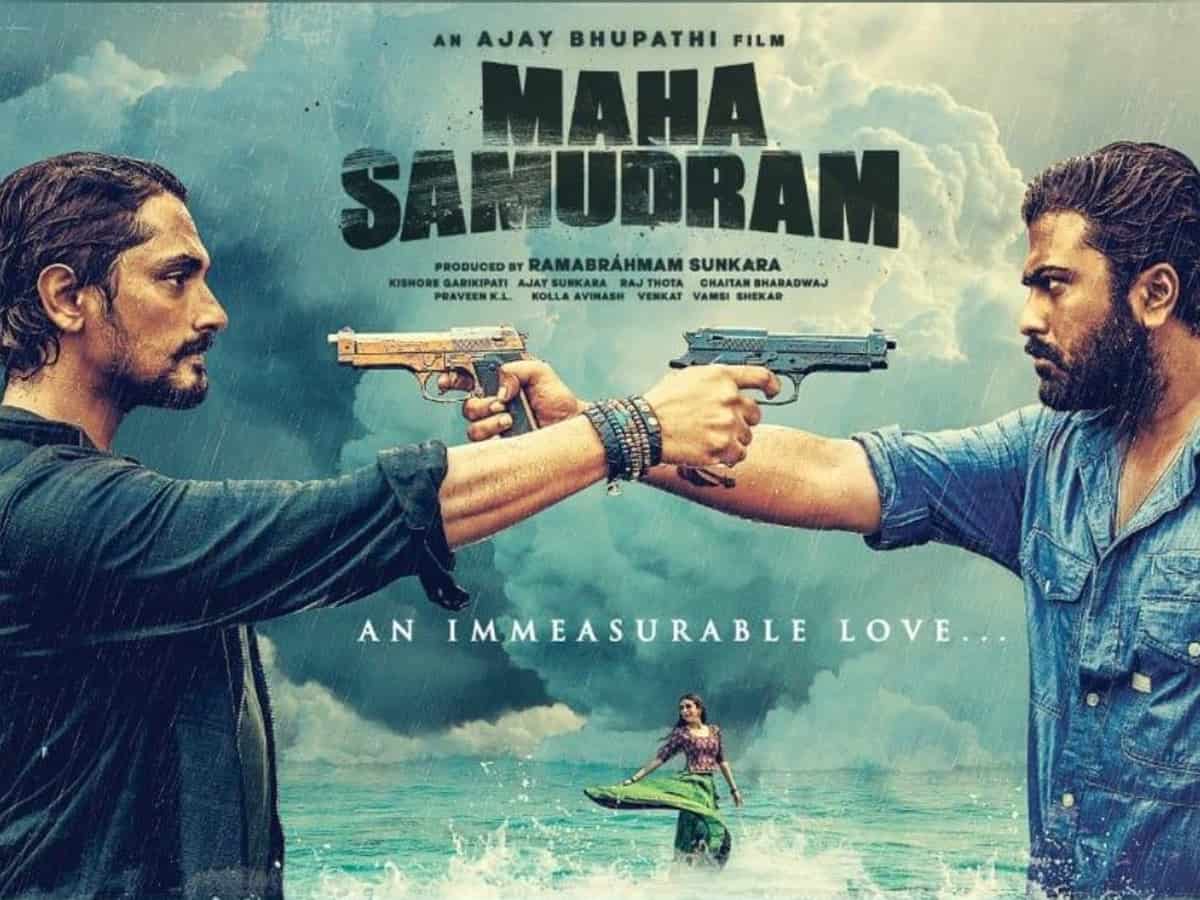 RX100 director Ajay Bhupathi had to wait for three years for his second movie release and here is Maha Samudram. With a huge star cast like Sharwanand, Siddharth, Aditi Rao, and Jagapathi Babu, Maha Samudram raised expectations amongst the audience. The trailer left the viewers puzzled and interested. The movie is hitting the screens today and here is our review of Maha Samudram.

Arjun (Sharwanand) and Vijay (Siddharth) grow up together and become best friends. Vijay aspires to become a police officer, while Arjun has got plans to start a small business. Vijay and Maha (Aditi Rao) love each other. Vijay accidentally injures a big don Dhanunjay and had to run away thinking he did kill him. He would not just flee the town, but also cuts the relation with Maha. Dhanunjay recovers but this time dies for real in the hands of Arjun. Years after that, Vijay returns as an enemy to Arjun. What really happened between the best friends and how they deal with many conflicts, what happens to Maha, forms the story.

Sharwanand and Siddharth are great actors. They perform really well and the chemistry between them is good to watch. Though their bond of friendship looks good, their rivalry is not appealing. Siddharth choosing this role for a comeback in Telugu is a bold move. Sharwanand performs well in a tough guy role who goes to any extent if he has to.

Aditi Rao looks beautiful as Maha. The title appears to be coined to tell the tale of Maha and Samudram. Aditi Rao gives a good treat of glamour and she acts well too. Anu Emmanuel not got much to perform and she looked beautiful in all the scenes. She is seen as Arjun’s love interest.

Jagapathi Babu’s role as Chunchu mama is good and entertaining. KGF fame Ramachandra Raju will be introduced as a ‘ruthless’ baddie, but his character falls flat after every scene. The elevation about him in the dialogues is a mismatch to his role.

Rao Ramesh appears as Goodu Babji, a cunning mind. The seasoned actor did quite a lot of characters like these except in this look. He did well in it.

Maha Samundram has a vintage story. The screenplay makes it even worse. Poorly etched roles and lag around scenes test our patience. Many a time, it looks like a scene after a scene without any connection between them.

The background score is good. Cinematography is also good. There are many beautiful shots, particularly with the sea background. Songs are alright, but with Mahasamudram’s story they end up as breaks.

The run time of 150 minutes is too big and that too without a gripping story. The lag remains one of the main villains of Maha Samudram.

Maha Samundram’s trailer gave hopes to many moviegoers as if they are going to witness another intriguing crime and romantic thriller. Many actors, powerful dialogues, and confusing relationships in the trailer raised curiosity even more. It all came out today revealing how and what Maha Samudram actually is.

Maha Samudram is a story of two friends and Maha Lakshmi. Siddharth wants to become a police officer just for the sake of power and paisa, Sharwanand who wants to put up a small business about which he never really talks.

Siddharth’s role as aspiring police and his thoughts of getting corrupt later, started well. But later it was never brought up again. Siddharth’s frustration and anger lack sense and depth. He just abandons Maha as he had to leave the town for a different reason. But later when he reveals, he says he just did not want her anymore. He gets envious and possessive about Maha, whom he ditched for years, which makes no sense at all.

The main character played by Aditi Rao lacks emotional connection. Maha is already madly in love with Siddharth, but never really understands his intentions. Later, the same Maha falling for Sharwanand is not really convincing. Sharwanand and her mother taking the blame and responsibility for Maha’s fate is very unrealistic. The love track and the song between Sharwanand and Anu Emmanuel is boring.

While Sharwanand getting influenced by Chunchu mama’s boosting and he becoming a don give us the 90s’ movie feels. Artificial emotions and monotony pop up when Sharwa overtakes Goonu Babji in the drug mafia and the same when Siddharth takes away Sharwa’s. Rao Ramesh is portrayed as an intelligent creep with weird mannerisms. His only ploy that worked is against Siddharth.

Amid all these, one doesn’t understand why a don in Vizag, Sharwanand never really tries to find Siddharth’s whereabouts. The same is the case with Siddharth, who is hiding out in Mumbai never really tried to know what happened back in Vizag after he left.

While there are many deadslow episodes, the songs in between made it worse. Apart from the love tracks, songs, some action scenes are shot well and elevated with background score. The weak and cliched narrative gives us hints on what is going to happen next in most parts. The drug mafia backdrop is not new to Telugu films, but the plot could have been better here.

At one point, Sharwanand says that ‘Samudram’ hides many secrets underneath. It looks like this ‘Maha Samudram’ has hidden many logics underneath, which we never get to see.

Bottom line: This Sea Is Predictable