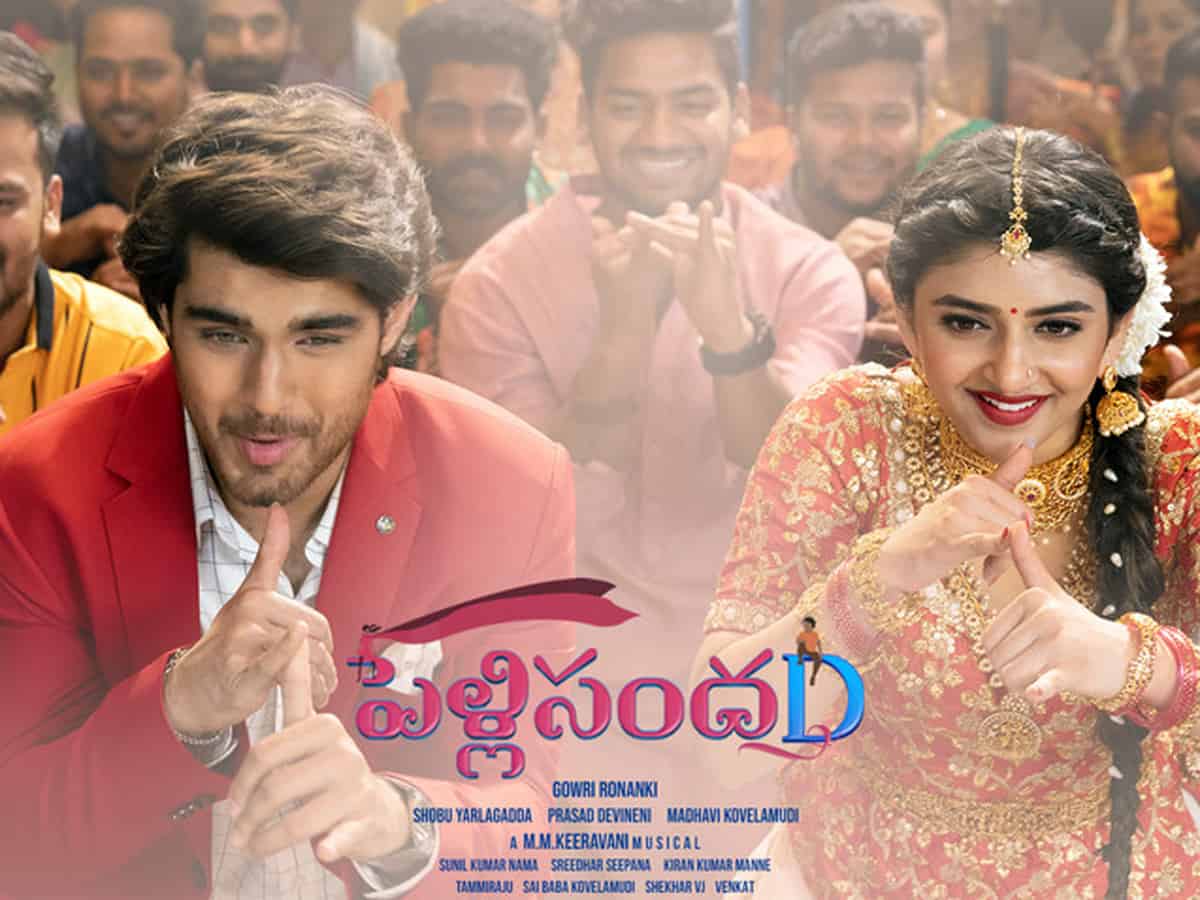 Director K Raghavendra Rao’s 1996 film Pelli Sandadi is a classic romance. Cashing in on the film’s craze, the makers come up with Pelli SandaD to introduce Sreekanth’s son Roshan. Newcomer Gowri Ronanki turns director under KRR’s supervision. Has it worked?

Vasisth (Roshan), a basketball champion, sees Sahasra (Sree Leela) at a family wedding. He falls for her and she doesn’t take long to reciprocate her love. Vasisth believes in his own will power whereas Sahasra has her trust in destiny. Meanwhile, Sahasra’s elder sister’s love forces her to take a plunge that she would marry the person chosen by her father (Prakash Raj). This separates Vasisth and Sahasra. How Vasisth wins both Sahasra and his basketball final match forms the crux of the story.

Roshan looks handsome best. However, he is still young to portray such a role. it is not convincing to show him as a marriage-ready guy. Sree Leela on the other hand is easy on the eyes. Her glam show is an asset amply used by KRR & Co. Sree’s dance moves in the songs are a treat to watch. Rao Ramesh, as usual, plays a father role. He couldn’t shine in the weakly-written character. Prakash Raj’s character is inconsistent. Shown as a powerful village head he is helpless when her own daughters go against his principles. Rajendra Prasad’s character is just a waste. Vennela Kishore brings minor relief through his humour. But he couldn’t rescue this badly written film. Director K Raghavendra Rao makes his acting debut. He is seen as old Vasisth who narrates his story for the biopic.

Pelli SandaD has no proper story on hand. It is further marred by the weakly-writing and poor direction. It is filled with cliches and predictable scenes. Making-wise, the film looks rich. Songs are well-shot in picturesque locales. Costumes of the lead pair are well picked. Cinematography makes the film visually appealing. But the film has no heart and soul. MM Keeravani’s music appeals but the placement of songs puts viewers off.

When a story as old as hills and rocks is picked and narrated in a dated style, the end result is Pelli SandaD. Right from the word go, the film suffers in its writing. It fails to establish why a young girl dreams of making the biopic of Vasisth and why she would threaten to kill herself if she doesn’t fulfill her wish. And the doting father (Rajendra Prasad) gets Vasisth so easily and learns about his story from himself. The beginning of the narration itself isn’t convincing. Even if we forgive the makers for this, the going gets even worse. It looks artificial and forced. The initial portions are draggy. First-time director Gowri took a chunk of the time in establishing the characters. The humour didn’t work. Neither Shakalaka Shankar nor Pragathi nor Raghu Babu. They struggled in the roles etched out for them. Cliched and predictable scenes make us squirm in the seats.

Heroine Sahasra gets lost – not once, but twice – just like the missing story! Even when Sahasra is missing from her home, hero Vasisth doesn’t make any efforts to find her, but only sits idle at home. There are several glaring mistakes in the movie which adds to the woes of viewers. Post interval, the film doesn’t rise either. Songs are a treat to watch though. There are flowers, fruits and water-drenched heroine’s glamour to offer some visual treat to voyeuristic guys. There is coconut water too. But are these enough to keep the audience hooked to the screen? The answer is absolutely no.

Why Rajeev Kanakala hates Vasisth and why does he want to stop him? Well, probably, makers felt that good and talented sports people would come across such crooked people. Pre-climax and climax portions are horrible to sit through. One has to leave their brains at home to experience this logicless and magicless romance. In fact, at the beginning of the film, KRR tells Rajendra Prasad that he is concerned about the people who truly want to know the story instead of the ones who try to pinpoint the loopholes in the story. Probably, this is an attempt to tell us to give up on logic. Especially, the placement of Bujjulu Bujjulu song (an out-and-out glam song follows teary-eyed heroine) shows the makers desperateness to fill a romantic song. The pre-climax and climax portions further dampen the overall experience. Helpless Prakash Raj sends rowdies as a last attempt to stop Vasisth. He gets saved by a basketball (yes, you read it right). The end is even silly. After watching the film, one doesn’t know why the film is named as Pelli SandaD, after all, the film has no Sandadi (fun) at all.