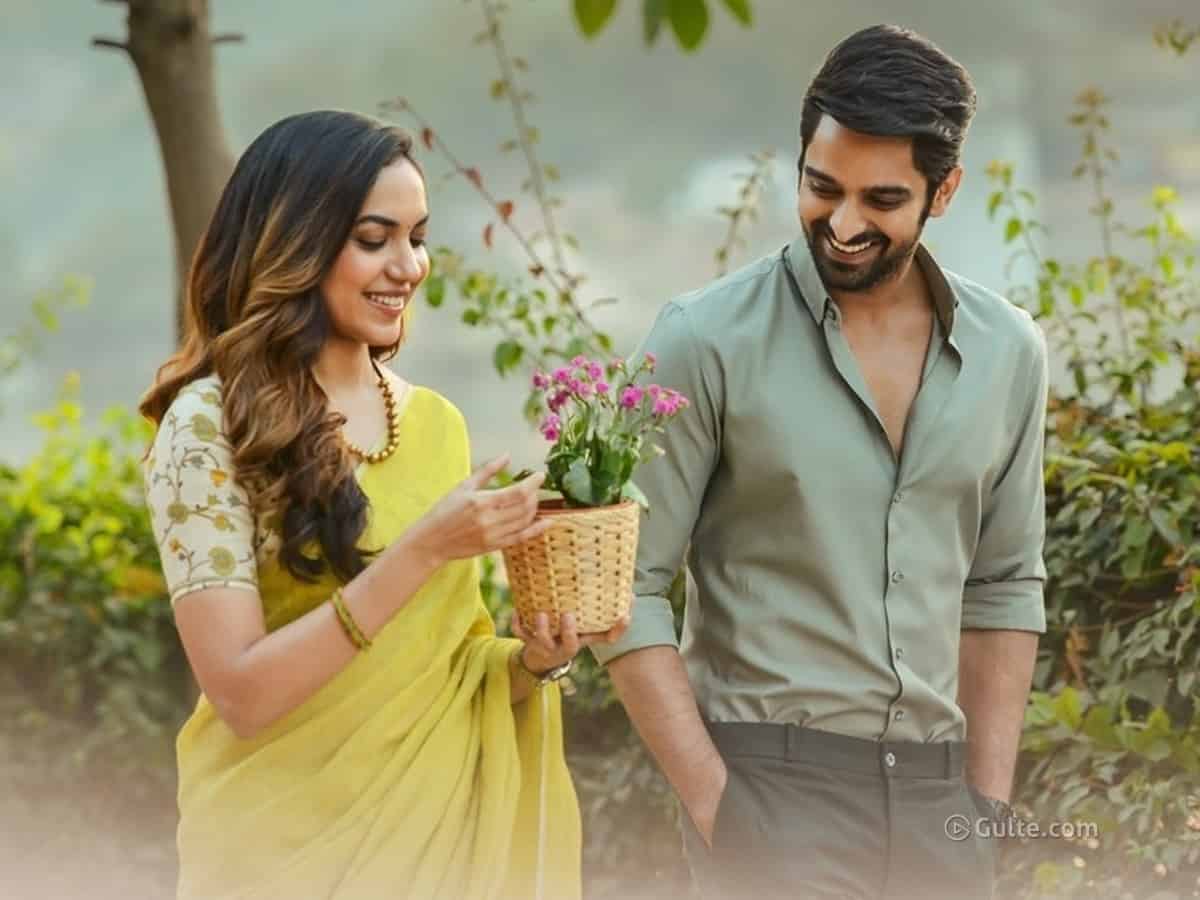 After overcoming all odds including the first and second wave of Covid pandemic, Varudu Kavalenu has finally hit the screens today. The film marks the launch of director Lakshmi Sowjanya and dialogue writer Ganesh Ravuri. While the duo try to give a fresh appeal to a regular story, check out whether all their efforts pay off?

Bhumi (Ritu Varma) is a bossy lady who runs a start-up company. Her mother (Nadhiya) wants her to get married and settle. Aakash (Naga Shaurya) is a renowned architect in Dubai who gives up a Rs 200 Crore deal and comes to Hyderabad. How are Bhumi and Aakash connected? What’s their flashback? Did they unite finally?

Akash is a tailor-made role for Naga Shaurya who pulled off the character effortlessly. He is handsome and looks dapper on screen. He does a neat job in interval and climax portions, particularly in emotional scenes. Rarely, heroines do get a substantial role. Bhumi is one such role for Ritu Varma. It is one of the best characters she played in her career till date. Nadhiya, Murali Sharma get decent roles. Vennela Kishore goes missing in the latter half. Sapthagiri’s ‘lag’ comedy fireworks create magic though. Comedian Praveen suits well as the hero’s friend. Comedian Satya is confined to a blink-and-miss cameo. Jayaprakash is good as MD of Bhumi’s start-up and her well-wisher. All the cast have got good characterisations.

‘Varudu Kavalenu’ is a very old tale but with interesting characterisations. The first half of the film is breezy, decent. It sets up the tone and mood for the second-half. However, there is nothing much left for the makers to fill the rest of the film. The flashback scenes in college are dated. They need fresh writing. Debutante director Lakshmi Sowjanya’s work is impressive. Dialogue writer Ganesh Ravuri steals with his dialogues. There are several catchy one-liners in the film which audiences take back home. Cinematographer Vamsi Patchipulusu is the unsung hero as the every-frame looks bright, colourful. Vishal Chandrasekhar’s music and background score compliments visuals. SS Thaman’s folk number Digu Digu Naga appeals to masses. Production values are rich.

‘Varudu Kavalenu’ is a run-of-the-mill story which is treated and fashioned in a better way. It is a simple tale of a guy and girl who gets separated and gets reunited. How it all happens makes for the film. But the cause of the couple’s separation – not just once, but twice – is not convincing enough. The first part of the film is balanced with comedy, songs, and fights in right proportions. The conversations of the actors are interesting and take the story forward. By the interval, it is clear where the film is heading to.

As the film’s second half kicks in, the director seems to have run out of the steam. And hence she starts the film with the flashback episode. The college scenes are really tad boring. They try to justify what made Bhumi become so tough, but did just one break-up make her so? Even it wasn’t a proper break-up since Bhumi didn’t express her love. She gives it up learning that Akash had his focus on career and no time for love. These need special attention in writing and making. The second half is slow and flat, barring last 30 minutes which stands out aa highlight in the movie. The emotional climax works in favour of the film.

The comedy gives relief to viewers and make us forget all the aforementioned flaws. Sapthagiri’s ‘lag’ fun has the audience in splits. Music and photography come in handy. Overall, ‘Varudu Kavalenu’ has its moments. The soul of the film is intact. It makes for a decent watch for both families and youth. After a longtime, audience got a clean family entertainer.