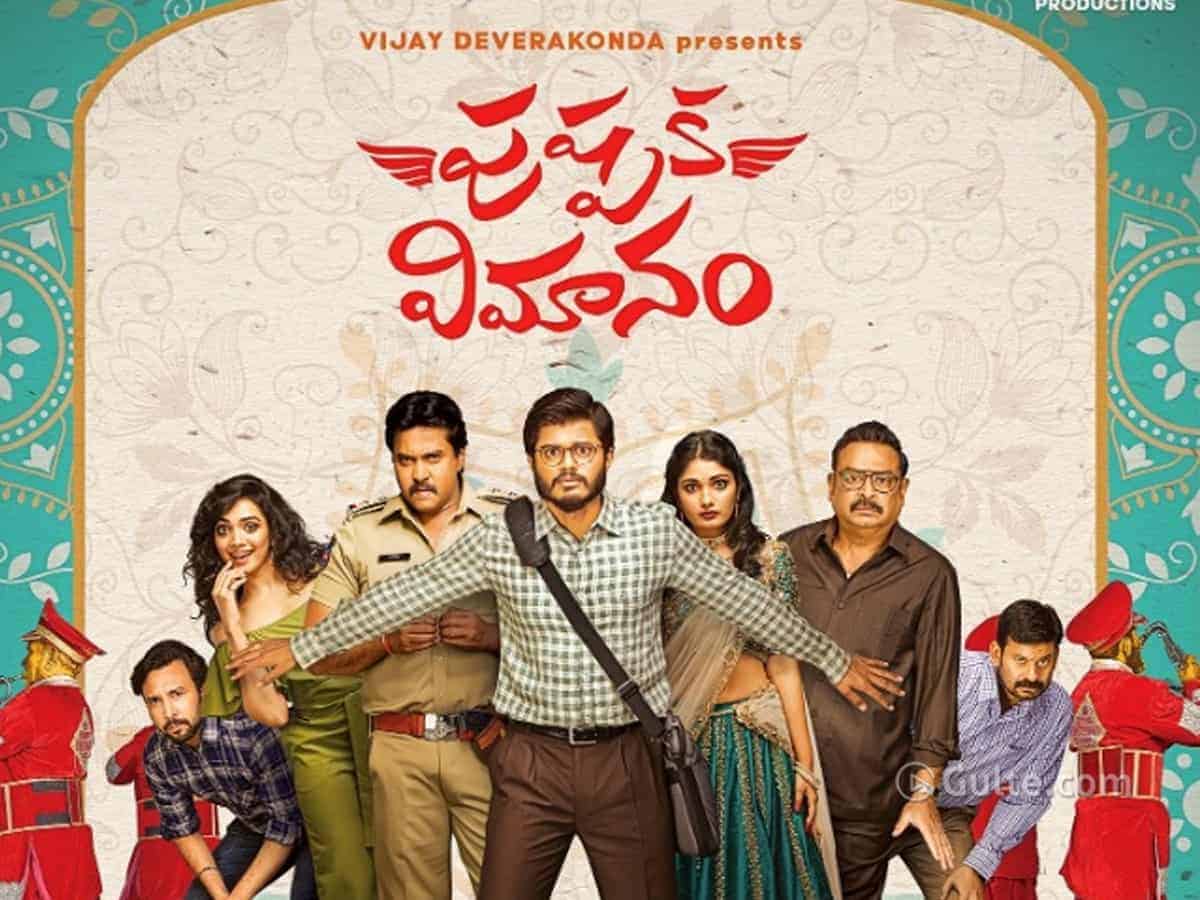 Anand Devarakonda is trying hard to make his mark. He is choosing different scripts to differentiate himself with his brother. While Anand passed the test with the OTT release Middle Class Melodies, he is facing a real test in the form of Pushpaka Vimanam which hits theatres today.

Just-married government school teacher Chittilanka Sundar (Anand Deverakonda) gets into a soup when his wife Meenakshi (Geeth Saini) elopes with her lover. Sundar tries to cover it up in front of neighbors and colleagues. He ropes in a short-film actress Rekha (Saanve Megghana) to act as his missing wife. But little does he know that more trouble is waiting for him. What is the unexpected twist? How does it change Sundar’s world upside down and how will he overcome all the odds that come?

Anand Deverakonda took a great risk by donning the role of a married guy which is much above his age. He does justice to it in his capacity. Still, he is quite young to pull off the matured character. Saanve Megghana is refreshing in her role as she shines in a handful of scenes. Her Telangana accent and diction add fun to her scenes. Although the whole story revolves around her, Geeth Saini has got limited scope to perform and she couldn’t make her mark. Sunil as cop has got his moments. His scenes with Saanve and Naresh are hilarious. Also, Sunil’s dialogues on his hair growth are good. His investigation isn’t engaging enough though. Naresh as Head Master got a meaty role. He does his part well. Sharanya Pradeep is alright as Geeth’s friend. But she doesn’t get enough portions. Comedian Giridhar plays a social teacher who suspects Sundar. His portions are engaging, but doesn’t add much to the story.

Debutante director Damodara has chosen an interesting concept and gives a good premise to it. But he gets confused with the mix of genres. This is where the film goes for a toss. Comedy scenes are the strength in the film which come in handy. Dialogues are neat and work in portions. Songs don’t leave a great impact. Background score is engaging. Visuals are supportive. The film’s runtime is one of its shortcomings.

Pushpaka Vimanam starts as a simple film. It prepares us to be a breezy romantic caper with small differences between a newly-wed couple and the wife abandoning the innocent husband. It shows the woes of the husband, how he is constantly ‘judged’ by his neighbours and his colleagues about his just-started marital life. The story is told from Sundar’s point-of-view. But the interval twist comes as a sudden shock to viewers.

The audiences are not prepared for the dark, gritty mystery that is shown. Simple comic caper slowly transpires into a dark film with the mystery and crime angles laced with it. This is where the film falters. The layers of crime, mystery aren’t well imbibed into the script. After the motive behind the crime is revealed and how the crime took place and thus mystery gets resolved, it looks silly as it doesn’t justify the curiosity it had generated before.

However, there are a handful of scenes in the film which evoke some fun. The police station scene between Rekha (Saanve Megghana) and SI Rangam (Sunil) where the former warns the latter is hilarious. There is another scene where Rekha hides in Naresh’s house during a police search. How she and Sundar manage to escape from the cops generates good laughs. Saanvee, Sunil and Naresh are the saving grace in the film.

The problem with Pushpaka Vimanam is its second-half which isn’t handled well. The investigation portions are not racy. The montage song where Sundar is on run should have been trimmed or totally avoided as it takes off the intensity of the situation which originally requires. The film also leaves some unanswered questions to viewers. How will a newly-married husband love his ‘eloped’ wife so much even after she rejected him? Why is he so desperate about her? Also why a best friend (Saranya) doesn’t even approach police even after knowing her friend Meenakshi’s murder? How did the culprit shift the deceased’s body to the crime spot escaping from cameras and people? Why did the constable try to help Sundar? These are some loose ends in this dark comedy.

If all these questions are answered, then it would have become a 10 episode web series .

All in all, Pushpaka Vimanam only works in parts. It fails to engage wholly. It’s like a turbulent flight. The film leaves us asking for more.

The movie really has a lot of scope to enhance further and has all ingredients to deliver, but newcomer Damodara settles with an average one.