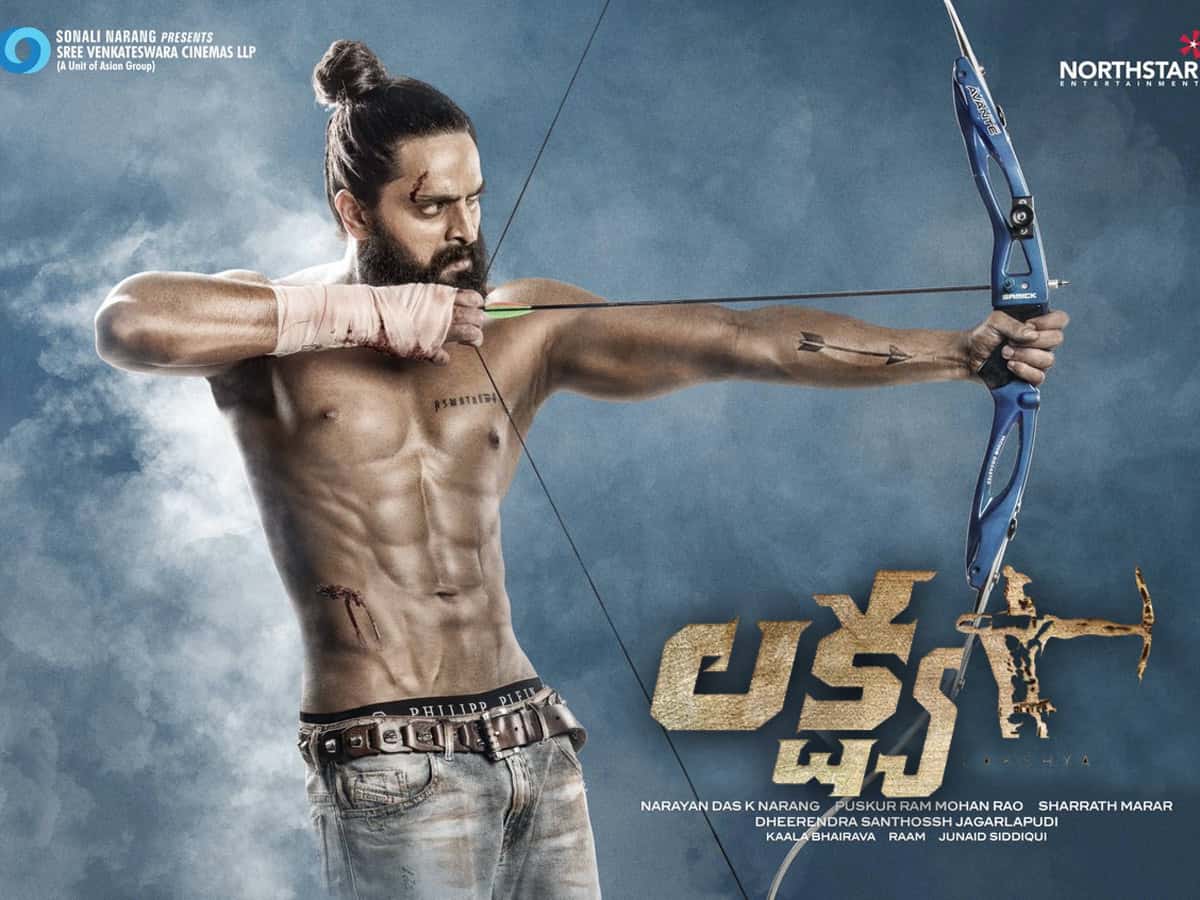 Naga Shaurya scored a decent score with his recent release and he is coming with a complete contrast movie Lakshya. The trailer hinted at the lows and highs of a talented archer. Naga Shaurya appears to have put a lot of effort to achieve an eight-pack chiseled body for Lakshya and we have to see how his efforts work for the film. Lakshya hit the screens today and let us see how it is with the review.

Parthu (Naga Shaurya) is a gifted archer whose strength and weakness is his grandfather Raghuramaiah (Sachin Khedekar). Parthu is in love with Rithika (Ketika Sharma). Parthu reaches to top league in archery championships in an unbelievably short time, but his grandfather’s passing away turns his life upside down. Meanwhile, a jealous contemporary archer Rahul (Shatru) plots to push down Parthu. While Parthu is falling to deep lows, Parthasarathy (Jagapathi Babu) comes into his life. How Parthu learns to cope with the loss, what ways he chose to become what his grandfather dreamed of and how Parthasarathy helps him, form the story.

Naga Shaurya is a good actor and he proved himself long back. He fits the role as a gifted archer but the story is age-old with the known formula of a sport-based backdrop. Naga Shaurya appears in three looks to show the phases of his life. The one with eight back chiseled body and the ponytail shows his hard work for the movie, but it has nothing to do with the story.

Ketika Sharma is okay and her role is limited as a well-wishing girlfriend. Sachin Khedekar is good even though his role is short. Jagapathi Babu is fine in his role and he did justice to the character he played. Shatru is alright and obvious as a routine villain who envies a successful competitor. Satya and Viva Harsha try to bring laughs in very limited scenes and they fail.

The songs and background score by Kala Bhairava in Lakshya are just fine. The background music during the archery championship could be intense and sharp, but it is all ordinary and flat. The editing could have been better. The first song will have Naga Shaurya in his look from the second half, while the scenes before and after that will be showing him a different look. The screenplay is fine and so is the cinematography. There are no dialogues that are worth mentioning.

Naga Shaurya has enthralled us with family dramas and love stories, his attempts with action and serious movies were not able to match the success were unsuccessful so far. Lakshya is a serious movie and it is also a routine movie. The story of the rising and fall of an athlete is not a new one, except that this backdrop is of archery.

A gifted athlete who rises to glory and falls down to nothing is a story we have watched many a time. Even if it is an old story, the gripping screenplay and powerful sports scenes could make it a better watch. Emotional connect and patriotic feel is must for a sports drama. Both are missing.

With predictable scenes from start till the end and absolutely no surprises makes Lakshya a very ordinary movie. The director could have made use of some intense scenes in this bow and arrow story, but the championship episodes also go quick and normal.

The director cliched the narrative throughout the movie makes it predictable and routine stuff. The bad guy finding the weak spot of Naga Shaurya and using his best friend to drug him is a vintage idea. Separated lead couple bumping into each other at a random place and hero crushing the wastrels for commenting the girl’s character or physique, is a concept as old as mountains. Also, the baddie always is followed by two or three chamchas, which is a decade-old style. There are many other illogical and uninteresting scenes.

Apart from these, there are some scenes like Kireeti sacrificing his place in the state championship league for a fresher Naga Shaurya just like that, which is far from reality. On top of that, he calls it justice but not a sacrifice. The director makes use of some terms like Barton’s fracture, speed shooting, and Robinhood shot, and again they remain just as mentions alone.

Naga Shaurya’s effort to appear in a new look is clearly seen in his transformation, but the perfect body has nothing to contribute to the story except for a fight to show his body off. Also, there is no proper scene of establishment for his body transformation.

The predictable story goes like a straight line until Jagapathi Babu enters, who is expected to do miracles. Well, he again puts the story back on the same known line within no time. Having said that, Lakshya is a story of a broken athlete that was told many a time earlier, in fact with a poor narrative.