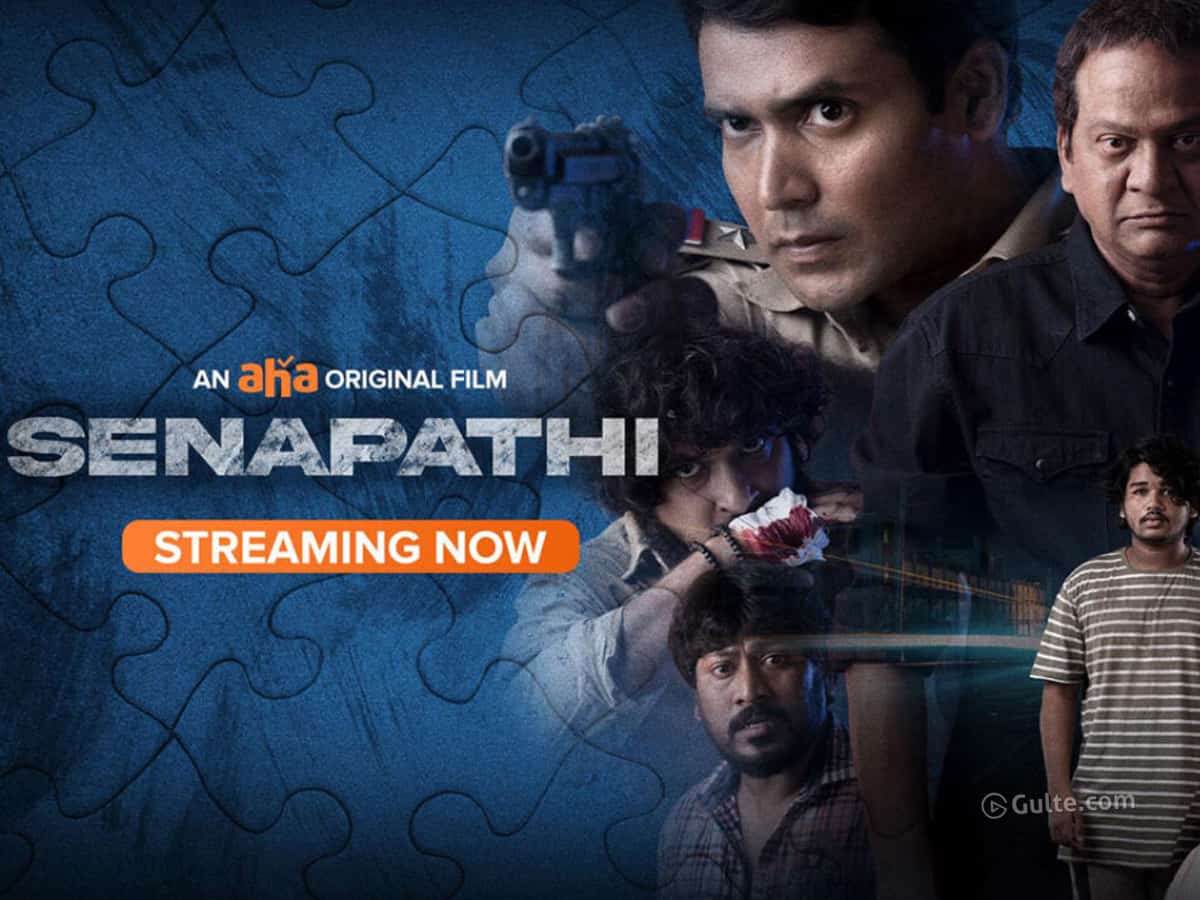 AHA is churning out films one after the other. This time it is out with its new film Senapathi. The film is directed by Pawan Sadineni and is produced by mega daughter Sushmita Konidela. Rajendra Prasad plays the lead role in this film which is a crime thriller.

Krishna(Naresh Agastya) is an orphan and a sincere police officer. His only aim is to crack the IPS. But sadly, he loses his service revolver while chasing a criminal. If this was not enough, the revolver reaches several hands and finally lands with Murthy(Rajendra Prasad). What did Murthy do with the revolver? What all crimes happen due to this? and how did Krishna get it back is the basic theme of Senapathi.

Young actor, Naresh Agastya gets good scope to perform. He looks a bit naive in key scenes but by the end of the film, he gives an able performance. Especially in the last half an hour, Naresh shows his intense side quite efficiently. Rajendra Prasad gets a makeover and is very good. He has tried something new and plays his part with utmost authority. His look and intense expressions in emotional scenes help the narrative. The way Harshavardhan’s character is introduced and the manner in which he plays is neat.

Shravan Bhardwaj has provided the background score and it creates an impact. There are a few scenes that feel loud but otherwise, the work is good. Dialogues by Rakendu Mouli suit the mood of the film perfectly. Vivek Kalepu’s cinematography gives the film a new look to the film. There is a special tone to the scenes which helps create an intense atmosphere. Editing is just about okay. There are not many actors in the film but the way it is made to look real and intense is impressive.

Senapathi is the remake of the Tamil hit 8 Thottakkal. But director Pawan Sadineni worked on the script and has given his own spin to it. The film is a crime thriller and is started on a slow note. Not that proceedings are dull but Pawan takes his own time to establish the work of Krishna and what he has gone through in life.

The film gets into top gear with the arrival of Murthy played by Rajendra Prasad. The way he commits the crime, gets associated with the revolver, and his emotional tensions, all this is shown well by Pawan Sadineni. The line looks predictable but Pawan Saidieni manages to create an impact thanks to Rajendra Prasad’s sincere performance.

But Pawan Saidneni saves the best for the last half an hour, where the film is quite impressive. The emotions, tensions, and cat and mouse game are unleashed with a taut screenplay. Once again, Senapthi has not many twists but the narration makes all the difference.

However, the film is not shy of demerits. The romance between Krishna and a journalist(Gnaneswari Kandregula) looks forced and is laced into the story for no reason. Scenes related to this episode sidetrack the film. The manner in which Harshvardhan investigates the case happens at leisure. Such scenes could have been reduced and the runtime would have been made crisp.

Despite all this, director Pawan Sadineni tries something new with Senapathi. The backdrop and storyline look familiar but he wins points for his simple and taut narration. Barring the glitches of a slow start, Senapathi has several good moments and ends as a watchable thriller.