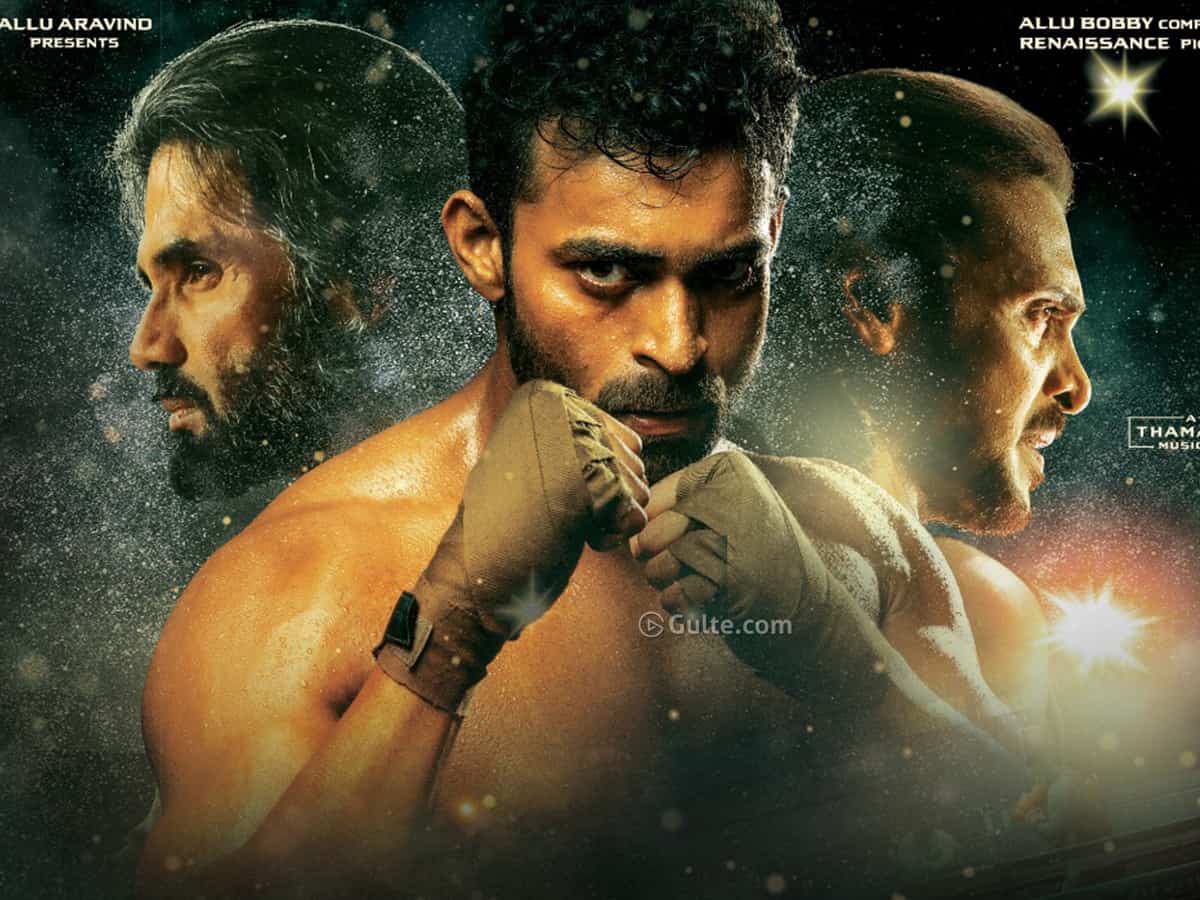 Varun Tej’s Gaddalakonda Ganesh was released in 2019 and he had to wait two years for his next release Ghani. While his previous outing was as a gangster, Varun Tej chose to be a boxer this time. The trailer of Ghani boasts about a boxing champion aspirant for many reasons and the story around him. Ghani is directed by Kiran Korrapati and is produced by Allu Bobby along with Siddhu Mudda. Having a popular star cast like Suniel Shetty, Upendra, and Saiee Manjrekar, Ghani is released today in theaters. Let us look at the review.

Ghani (Varun Tej) is a boxing aspirant, whose father Vikramaditya (Upendra) was a famous boxer who was accused of doping. Ghani hates him and wants to prove himself as a boxing champion. Against his promise to his mother Madhuri (Nadhiya) Ghani gets into boxing and learns many truths from Vijender Sinha (Suneil Shetty) and also about Eshwar Nath (Jagapathi Babu). What really happened? Will Ghani really become a champion?

Varun Tej is improving his acting skills with each movie and with different choices of films. He is good as a boxing aspirant and it appears he worked real hard to shape his body. Varun Tej’s efforts apart, his role needed to have much more depth in boxing and its terms.

Upendra did fine in his brief appearance as a boxer. Though most of his presence runs with the dirty politics in sports and other issues, he did his part all over. Suniel Shetty is alright and he mostly carries a single expression throughout. The boxing scene between Suneil Shetty and Upendra is not intense and it hardly impresses.

Saiee Manjrekar is in the film just that the hero needs to have a love interest. She does not get to utter a dialogue in the second half. Nadhiya gets a lengthy role as Varun’s mother and she did fine. This kind of role is not new to her.

Jagapathi Babu did okay in the role and it is not about his performance, but his choice. The talented actor has appeared in a similar role in the recent past for Naga Shaurya’s Lakshya and for Good Luck Sakhi. His appearance in Ghani is monotonous.

Naveen Chandra, Naresh, and others did alright in their respective roles.

Ghani is not just any new story, neither it is an intense sports drama. The cinematography is good and so is the screenplay.

The songs come and go. The title song Ghani is good. Tamanna’s special number is not needed at all. It just cuts the pace at the pre-climax.

The background music by Thaman is good and the scenes could have been better if they match up to the intensity in the BGM. The dialogues are pretty ordinary.

We get some ideas about what the story could be when we watch the trailer of a movie. Ghani is one such movie that we can exactly figure out what’s going on by just watching the trailer. The reason is we have watched a good number of similar plots and Ghani does not disappoint our predictions.

An aspiring boxer hates his father for the latter’s faulty past but later gets to know what actually happened and starts to admire him. He takes on the leash, does what is needed, and wins against the bad. This is the story of Ghani and many other such movies, in a nutshell.

First things first, Ghani is supposed to be an intense sports drama with family sentiments and politics around. But here, the intensity and the depth in boxing are missing. There won’t be any details about his training, nor the coaches’ tips and tactics for the matches. The movie is primarily based on boxing but it hardly focuses on the techniques in the ring and the matches fail to impress.

The forced love story of Ghani and the heroine is boring and could have been avoided. Skipping the scenes of their love story and the song for it could have saved many minutes in the story leaving it at least with a neat run time.

The reason for Varun Tej hating his father is sensible, but why his mother let the hatred grow in him is not known. Though she made him promise to stay away from boxing, she could have revealed some facts instead.

Coming to the second half, the song where Suneil Shetty trains Varun Tej is good. Varun built his body well apt for a boxing aspirant and he shows of his six pack in a glimpse. The boxing matches there after could have been more gripping and enthralling, which are not. Most of them appear rushed. Coming to the politics by the baddie Jagapathi Babu, the betting drama he does could have been deeper, and that also appears like a plot-sake touch. The movie goes predictable all along and that includes the villain’s cunning ploy each and every time.

Even the climax match which should be fierce and powerful appears weak and obvious. From Thammudu to Jersey, we have seen umpteen sports dramas in Telugu that are interlaced with emotional background stories. The ones that were able to make a connection with the audience with the proper shots in the particular sport turnout successful. Ghani is not one of them.

Overall, Ghani is just another sports-based family drama in an old template. With RRR running successfully and KGF 2 coming by this time next week, we have to see if Ghani survives a knockout punch by those two players.