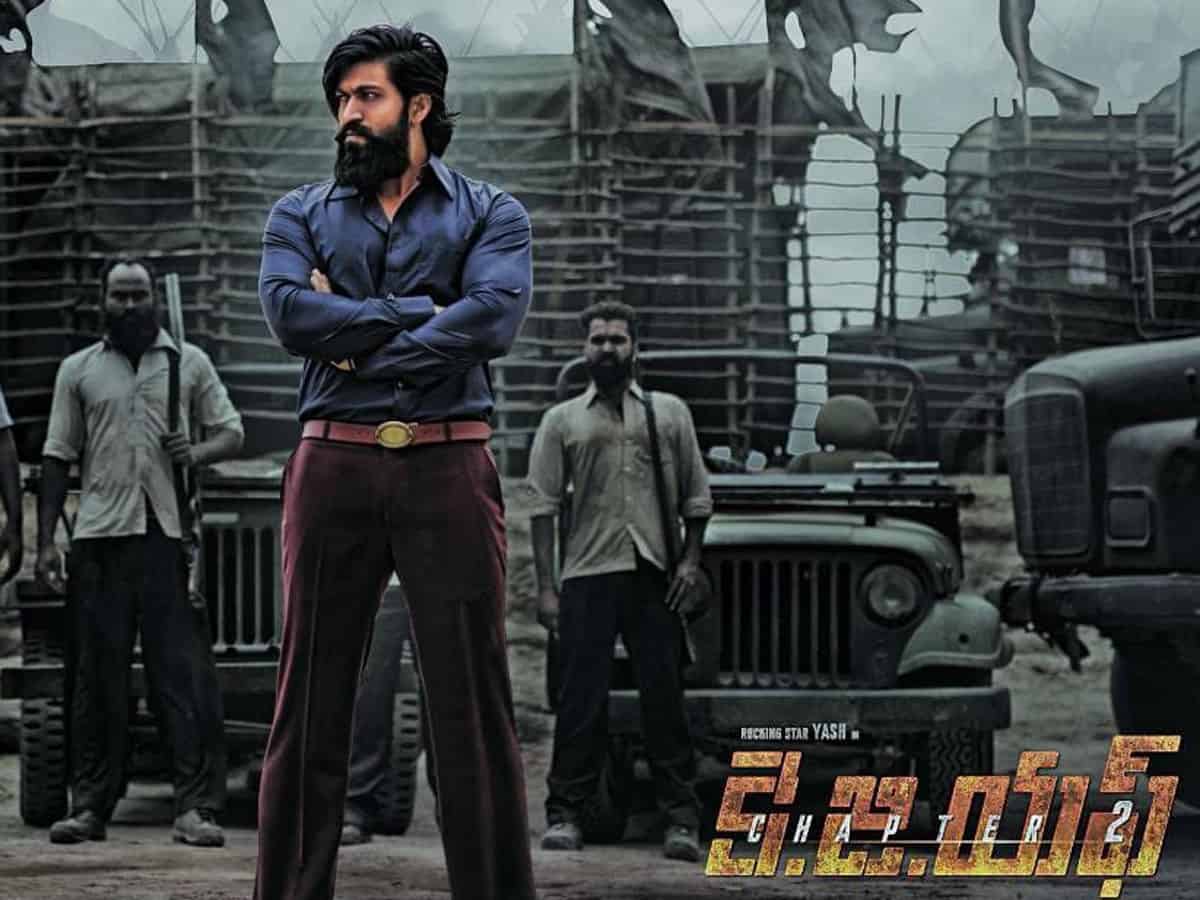 KGF Chapter 1 turned out one of the biggest blockbusters due to its unprecedented elevations and making. That raised more expectations for Chapter 2 and the movie hit the screens today, after a long wait. KGF Chapter 2 made a huge prerelease business worldwide already. With the protagonist Yash being the center of the KGF story, this time the new stars Raveena Tandon and Sanjay Dutt joined in to make it much bigger. Directed by Prashant Neel, KGF Chapter 2 was released with huge hype, and here is the review from the US Premieres.

The famous journalist Anand had to stop narrating the story of Rocky and KGF due to a heart stroke and his son Vijayendra Vasiraju (Prakash Raj) continues the narration. While the first chapter concluded with Rocky killing Garuda in a most shocking way, the second chapter deals with Rocky’s rule in KGF with new and unexpected enemies like Ramika Sen (Raveena Tandon) and Adheera (Sanjay Dutt) trying to take him down. How Rocky deals with his rivals and how he keeps the KGF under his thumb is all about the KGF Chapter 2.

For those who have watched the first Chapter, it is needless to explain that Yash continues the same mannerisms, style, and body language in this one too. Yash keeps up with the elevation scenes and action blocks, and he did well like earlier. The catch is that the story is completely based on elevations and fights that come in regular intervals.

Srinidhi Shetty had been given the grumpy expression that she put up in the first part and she continues the same. She has got nothing much really. Raveena Tandon appears in a strong role, but only for a brief part in the second half. She did alright in it.

Sanjay Dutt is shown as the most powerful and the mighty Adheera. There are scenes where Adheera appears the strongest and scariest, but there are also other scenes where he looks weak and dull.

Prakash Raj, Rao Ramesh, and others are fine in their respective roles and they mostly go in a flat track.

KGF has set the expectations on how rugged and rustic the film could be. The Chapter is no different with the dark smoke and dirt all around. The cinematography is very good and there are certain action blocks that are elevated with the set frames. The visuals are rich.

The background score is good and in fact loud at times. The screenplay is well set and so is the editing. The trimming of some slow episodes in the second half could have delivered a crisp run time.

KGF Chapter 1 dealt with an outraged man taking the throne of the biggest gold mine by killing many big heads, which no one ever expected to happen. If the first part is about the rise of Rocky Bhai, the chapter is about his rule. The fearless and arrogant Rocky Bhai ruling the KGF and locking horns with the government of India is shown in this part.

Needless to say, the first part of KGF grabbed the spotlight all of a sudden due to high-octane action scenes that involve never-before elevations. The director simply repeated the same template here in the second part, except that his best elevations remained in the previous part. The plots and plans by Rocky Bhai were surprising and impressive back then, but most of them in this chapter could be anticipated.

Comparisons apart, Rocky and the ruthless Adheera confrontation scenes are interesting. Also, the climax fight between the both is engaging. The director bringing back the hammer of Rocky to face the mighty sword of Adheera is one of the good action parts.

Rocky testing the big gun at the police station is the scene that completely thrills the audience. Rocky’s visit to the police station just for one gold bar depicts how rigid he is. The firing of bullets for minutes and the red hot gun barrel shows the intensity of how particular he is for anything he wants.

In the car chase scene in the first half, Rocky taking Adheera down with ‘Kalashnikov’ armory remains among the decent action scenes.

Rocky coming face to face with the Prime Minister herself in her office with a case file and declaring his arrival and capacity is one of the highlight scenes.

Coming to the dialogues, Rocky’s mannerism of speaking in broken English worked only a little this time, but there are mention-worthy dialogues like, Biryani – Qurbani, Mongoose in Snake and Ladder game, the CEO of India, Powerful people make places powerful, Rocky’s gravity, etc.

The first half goes alright with racy narration, elevations (not as powerful as in the first part), and some powerful action episodes. The second half slows down with Adheera missing for a long time and the love track which also comes with an uninteresting song.

There is another track with Gurupandian politics in between the war of PM and Rocky Bhai. The narration at times feels racy, but most of the time it appears rushed, leaving no time for the audience to compile on what’s happening.

KGF itself is mainly based on heroism and elevations, but too many of the stunts and sycophancy without any depth in it failed to impress here. There are scenes that come and go without an actual emotion. It is like a fort of elevations alone, that may make the mass and action-loving fans look up. The reason why Rocky is after the gold is revealed in the end, but it does not really make sense when we recap everything he did for it. Well, the director left a hint in Chapter 3 that probably shows Rocky’s international crime.

Overall, KGF Chapter 2 has all the pages filled with hype and elevations in bold, but the story only in very few lines in a small font in a preface. The First Chapter of KGF was enjoyed hugely by the masses due to the stunning elevations and action scenes, but the second chapter came out with similar stuff and with more expectations. KGF Chapter 2 may get on well if and only the mass audience once again embraces it.

Bottom line: Not A Monster