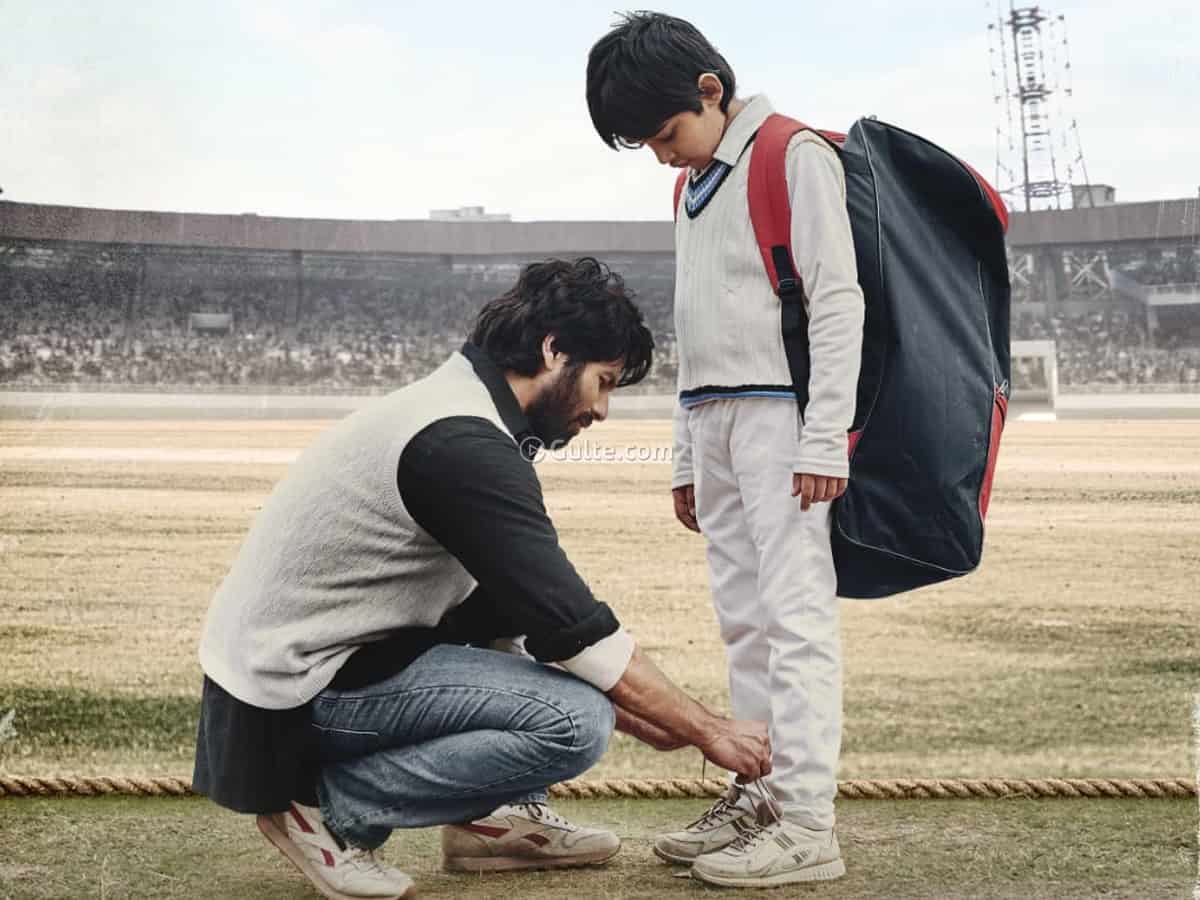 Jersey is one of the most memorable films in Nani’s career. It proved what Nani can do as an actor. Well, the film has been remade in Hindi with the same title and has been waiting for its release for close to two years now. Directed by Gautam Tinnanuri, the film has managed to release at a time when KGF 2 is in full throttle.

Arjun Talwar(Shahid Kapoor) is an ex-Ranji player from Chandigarh who leads a depressing life with his wife(Mrunal Thakur) and son. Arjun’s wife is the sole bread earner and hates the way Arjun is treating himself. After a few emotional altercations in life, a situation is created when Arjun’s son forces him to take cricket back into his life. But Arjun is already 36 which is way past the age to make a comeback. But Arjun takes a daring step and goes all out. What all obstacles did he face is the story of Jersey.

Shahid Kapoor is a perfect match to play the role of Nani in Jersey. Right from the word go, it is Shahid and his emotional performance that makes you forget Nani even though the other factors remind you of the original. Shahid as the helpless Arjun Talwar, essays the character with maturity and restraint, exhibiting his emotions and suppressing the raging volcano within.

Pankaj Kapoor plays the coach’s role to perfection and he brings a believability factor to the film. His conversations with Shahid are emotional and inspiring. Mrunal Thakur, who is known as a performer is amazing as the one who is frustrated in life. These key aspects of the character have been brought out so convincingly by Mrunal. When it comes to performances, the remake is no lesser than the original.

Jersey is set in two different eras and both are captured beautifully by Anil Mehta. Shahid Kapoor’s last film, Kabir Singh had amazing music but Jersey misses out as none of the songs create an impression. The background score is easy on the ears but the screenplay is stretched too much as the scenes look lengthy. The cricket matches and their authenticity is shown beautifully but they eat up most of the second half’s runtime.

The dialogues between the father and son are beautiful and move you in several scenes. Jersey is a scene-by-scene remake of the original and those who have seen the original will have issues with novelty and writing. There are issues in the first half as scenes related to Shahid and Mrunal’s relationship look repetitive.

Jersey has a familiar premise and there are already a few films made in this genre. For the Telugu audience, it was new and Nani doing such an emotional role for the first time worked in favor of the film. When it comes to Hindi, the casting is done right as none other than Shahid Kapoor would have done justice to the role.

The father and son scenes, Shahid showing his emotions at a railway station, and the climax, all these are executed convincingly. When it comes to performances, director Gautam Tinnanuri gets it right and extracts amazing work.

But where the film goes wrong is the pacing. Post the Covid era, the audience has lost patience and this is exactly where Jersey slows down. The story is set up slowly and most of the time is eaten up in the second half with cricket. As there is a predictability factor in these matches which is not novel, one does not get the feeling of seeing anything new.

In all this Shahid Kapoor leads from the front and engages the audience with his dynamic act. The film is a scene-to-scene remake and director Gautam should have made sure that he changes a few aspects to suit the Hindi nativity. One more drawback is the usage of too much Punjabi which is a put-off. It disconnects the audience with the emotions.

The original had drama at its best but when it comes to the remake, the soul is missing somewhere in translation. Though director Gautam Tinnanuri makes an impact with his story and performances of the star cast, the drama in Jersey looks a bit outdated. The saving grace of the film is Shahid’s awesome act.