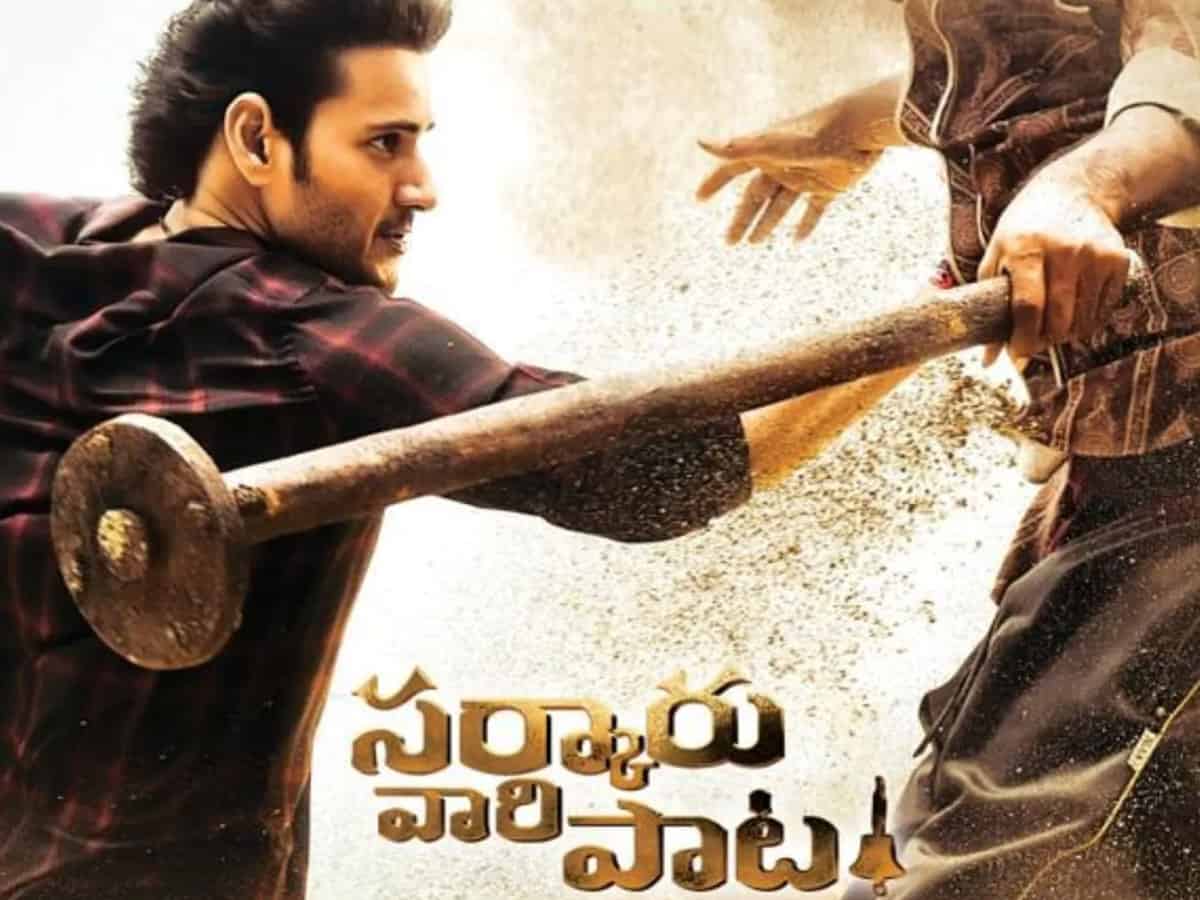 One of the biggest stars of Telugu cinema, Mahesh Babu is coming to theaters today with his Sarkaaru Vaari Paata, directed by Parasuram Petla. Superstar Mahesh Babu missed a release last year while his previous release was Sarileru Neekevvaru in 2020.

Sarkaaru Vaari Paata already started registering big numbers at the box office with the pre-release business overseas. With Keerthy Suresh as the female lead and music direction by Thaman, Sarkaaru Vaari Paata garnered big expectations with the trailer giving us some super mass dialogues and action scenes. Let us walk through the review.

Mahesh (Mahesh Babu) owns a finance business in the USA. Kalavathi (Keerthy Suresh) cheats him with the hand loan. Mahesh comes to Vizag to recover the debt from her father Rajendranath (Samuthirakani) an influential politician but asks for not what she owes him, but a shockingly huge amount. Why does Mahesh demand such a big amount to pay him back and what’s the real story behind it? The answer to these questions is the story of Sarkaaru Vaari Paata.

Mahesh Babu takes over everything and everybody with his presence whenever he is in the frame. He looked his best compared to that in his recent films. The fun dialogues and his timing are enthralling. Mahesh Babu did his part and tried to pull off to the shore, but the weak narrative doesn’t cooperate with him.

Keerthy Suresh’s role is mostly passive and not satisfactory. Though she looked her best in all the films she acted in so far, her character is boring. Only the fun part between Mahesh Babu and her worked well in the first half, mostly due to Mahesh’s timing. Her part in the second half is mostly passive and boring.

Vennela Kishore stays around Mahesh Babu in the first half and the conversations between them are funny and entertaining. Samuthirakani’s role is monotonous as an influential baddie. Subbaraju, Tanikella Bharani, and others are alright in their roles. Nadhiya appears in a short yet important role.

The first half mostly was shot in the US and it has all the rich colors and attractive frames. Sarkaaru Vaari Paata has rich production values and the amount spent well on it could be seen on screen.

The story itself is unrealistic and preachy at times. The screenplay could have been better. The theme and the characters are consistent but the plot deviates to the unrealistic route.

The songs Penny and Kalavathi are good to watch. The highly anticipated mass song Ma Ma Mahesha is disappointing and not as per expectations. The background music and theme sound are good.

In the last few years, we have seen umpteen films bringing the topic of rich Indian businessmen fleeing the country after they are asked to repay their debts to national banks. Sarkaaru Vaari Paata just doesn’t mention it, but the whole movie is based on those incidents.

Director Parasuram convinced Mahesh Babu with the contemporary topic that involved government and banks but failed to execute it in a possibly realistic narration. There is no solution to that real problem so far, but Parasuram’s approach to public revolution and agitation is unconvincing.

First things first, Mahesh Babu managed to pull off the first half with ease and he entertains the audience with his funny dialogues and also action blocks. The chemistry between him and Keerthy Suresh worked and the credit has to be given to Mahesh Babu’s wit and satire. The entertaining part ends with the interval and the second half makes more turns only to leave the audience with preaching and boring episodes.

The interval block gives a twist of Mahesh demanding a huge amount from Samuthirakani. It can be understood that Mahesh has come all the way to Vizag for recovering his debt and to satisfy his ego, but it is illogical when he takes up an issue between banks and an arrogant politician and finally wins.

Though the logic misses in Bank scenes, Mahesh ramming into everything with his lorry towards the politician’s house is highly intense and electrifying.

There are very few fun parts in the second half like Mahesh imitating Subbaraju in a Vizag accent, asking for coffee, and a lot of boring episodes like the silly awkward romance between Mahesh and Keerthy Suresh. Also Subbaraju’s ringtone ‘La La Bheemla’ brings a few laughs. The arrogant and angry heroine turning into a good-natured woman all of a sudden, just after the forced romance is one of those very boring scenes.

There are scenes where Mahesh beats the recovery agents from the bank and brings on an agitation against the banks. Well, it sounds like a self-satire when he kicks the recovery agents, as he did the same recovery in the US and even came to India for the same reason. In the climax too, the villain forcing and kidnapping people in the city to repay the loans is upright silly, and senseless.

Most of Mahesh’s recent films are serious dramas with a lot of preaching and messages. In Sarkaaru Vaari Paata too, Mahesh attempts to give a message while he convinces the highly influential politician Rajendranath to repay the loan. After Mahesh Babu reminded the ‘baadhyata’ in the last few films including Sarkaaru Vaari Paata, the full-on ‘entertainment debt’ owed by Vintage Mahesh to the audience is not paid yet.

Overall, Sarkaaru Vaaru Paata is Mahesh Babu’s show altogether with the main plot missing the logic and reality. With a passable first half and poor second half, Sarkaaru Vaari Paata is a disappointing ‘bid’. While the openings are huge, it has to be seen how the Mahesh Babu-starrer manages to pull the audiences to theaters hereafter.