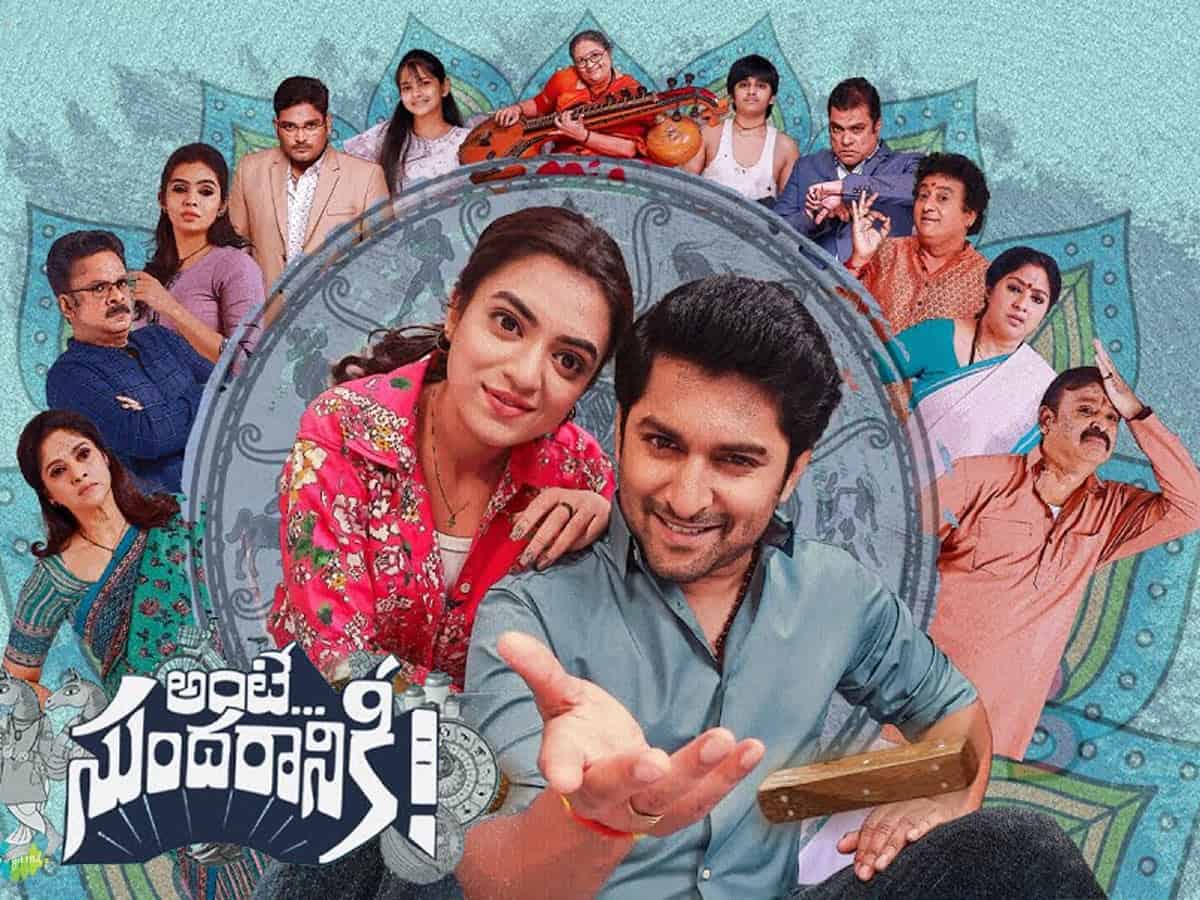 Nani enjoyed a big success with Shyam Singha Roy. Nani has been juggling between the genres since a while, but rom-coms always worked better than the action films for him. The natural actor is once again coming with his favourite genre, a comedy entertainer, Ante Sundharaniki. Nazriya Nazim is the female lead.

Ante Sundharaniki is directed by Vivek Athreya who is two films old. Both his previous films Mental Madhilo and Brochevarevarura garnered decent reviews all over and now, he is again coming up with comedy entertainer. The trailer hints of the funny troubles of the love birds as they belong to different religions. The movie hit the screens today. Here is the review.

An under-confident orthodox Brahmin guy Sundar (Nani) falls in love with a Christian childhood friend Leela Thomas (Nazriya Fahadh). Due to the situations in the family and of course the different religions become hurdles for their wedding. So Sundar and Leela decide to tell the biggest lies of their lives to get married. What are those lies and what are the consequences they faced? Do they finally get married? Ante Sundharaniki answers all these questions.

Nani is at his best in Ante Sundharaniki. His comedy and its timing needs no introduction. Nani overshadows everybody in the movie with his show. We only get to see Sundar Prasad all along as he gets under the skin of the character with an ease. This is one of the best performances from Nani in a romcom after Bhale Bhale Magadivoy.

Nazriya Nazim is very talented and beautiful actress. Nazriya nails it as a Leela Thomas and she is the apt for the role.

Child actors Sekhar Master’s son Vinni and the girl who did as Leela are good. Sekhar Master’s Son Vinni gets a lengthy role and his ‘Chiru’ dances are worth watching. He might be able to pull off more such roles soon. Anupama Parameswaran did a cameo and she did fine.

Director Vivek Athreya started it off slowly and took his time to establish the characters. Though the introductions are deep enough and entertaining, the unfolding of center plot takes time. His writing is unique and enthralling due to the back and forth screenplay.

The cinematography is good. The background music by Vivek Sagar is perfect and soothing for a breezy movie like Ante Sundharaniki. All the songs come along with the story and catchy number could have been better.

Lag In First half

Director Vivek Athreya has the knack for non-linear narratives. He did it with Brochevarevarura earlier and now with Ante Sundharaniki too. Though the concept is simple, his unique style of writing and interlinking the characters’ complications makes his films an interesting watch.

Ante Sundharaniki is love story of a Brahmin guy and a Christian girl who does the unpredictable to get married, but also the troubles they faced due to the same.

First things first, the audience have to wait for the main story to unravel though the director’s fun treats before that keep coming. The multiple sub plots, lies and stories of Nani to convince the family to fly over the seas are not always convincing enough. There were too many mini stories to introduce each character, which is not really necessary.

Once the story takes off in the second half, the director made sure to keep the audience thrilled with uneding twists and racy turns all along. Vivek Athreya’s writing deserves an applause for writing the unpredictable scenes and fresh comedy situations.

Althrough the movie, Nani’s frustration comedy worked really well. His every conversation with Harshavardhan and the latter’s counters are hilarious. Rahul Ramakrishna appears in a short role and he brings out some laughs.

A love story between a boy and girl from two religions is not new. But the director’s approach about the inhibitions and forcing situations here is different from others. He chose a hilarious yet subtle way to touch the senstive subjects like religions and its influence on next generations.

Not just that, the director Vivek tells us the story of Sundar and Leela like a Chandamama Katha, which always had a moral in the end. He has been bringing up the point of caste difference from the school play in the beginning till the end where he takes on social hypocrisy. But a sensible yet heavy and emotional climax end up in contrast with the fun-run from the beginning.