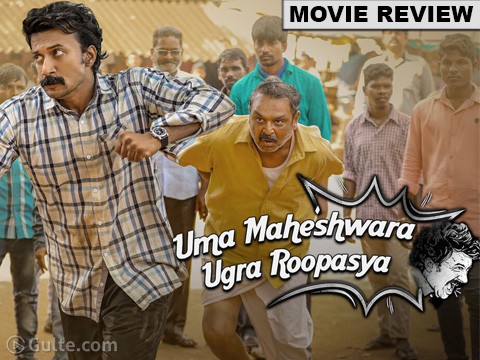 Uma Maheswara Ugra Roopasya is the latest film from Tollywood to directly drop on a streaming platform. It is a remake of Malayalam film Maheshinte Prathikaram. Satya Dev played the lead in this film directed by Venkatesh Maha who made his debut with critically acclaimed movie Care Of Kancharapalem.

Mahesh (Satya Dev) is a photo studio owner who leads a simple life. A chain of events break him and how he redeems himself forms the crux of the story. He gets into a street brawl, where he is beaten and humiliated in front of many people. He vows not to wear any footwear until he beats that man. His girlfriend chooses an NRI groom over him. How another girl enters his life and makes him a better photographer is another thread in the story.

Satya Dev is a natural. He is very good as Mahesh, a character that never looks like a ‘hero’ anywhere. He is very impressive in emotional sequences in particular. This film proves that he can pull off an entire film on his shoulders. Hari Chandana and Roopa Kodavayur have delivered natural performances. Suhas is good with his natural performance and humor. Naresh’s performance stands out among others.

Venkatesh Maha remains faithful to the screenplay of the original. There aren’t any changes to the script except for a few tweaks. Natural dialogues and true to life characters are the biggest plus for this film. Songs and background score by Bijibal are pleasant and in tune with the feel of the film. Cinematographer captures scenic Araku in a delightful way. Production values are alright.

Uma Maheswara Ugra Roopasya title and plot sounds like a serious revenge drama. But it is not a regular revenge saga where the protagonist is after his villains. It is a simple story with simple characters that have simple goals. The incident that leaves the protagonist broken itself is not a cinematic sequence. The protagonist gets beaten in a street brawl and he vows to beat that guy. He knows that he cannot take on him and joins a martial arts class.

His girlfriend breaks up with him and marries a rich NRI. Mahesh doesn’t even bad mouth her and instead watches her from a distance. This is what makes Mahesh look different from our typical stereotypes. He is a photographer, but doesn’t put in any efforts to capture natural photos. His photography is also as mechanical as his life. He doesn’t even realize that his photography is bad until a college girl confronts him.

As Mahesh prepares himself for taking on the man that beat him in front of his whole village, he also discovers the photography skills in him. UMUR starts off in a pleasant way with village humor and natural characters and is engaging until the interval sequence. However, it struggles in the middle portions due to slow pace and without much happening to drive the story forward. The entry of Jyothi character brings some energy, but it ends on a predictable note.

Some Malayalam films are tough to remake as they don’t have strong plots. Malayalam directors make movies with simple themes and characters with a natural setup. Maheshinte Prathikaram is one such film which poses a challenge to anybody who wants to recreate it. Venkatesh Maha is partly successful in getting the soul right. He remains faithful to the original without making any notable changes.

Maha’s mark is visible in the natural dialogue and the actors that he chose to play some key characters. UMUR has an offbeat vibe to it with true to life characters and incidents. You may enjoy it more if you haven’t watched the original. It doesn’t offer anything new for those who had seen the original, which is a far superior film in every aspect.