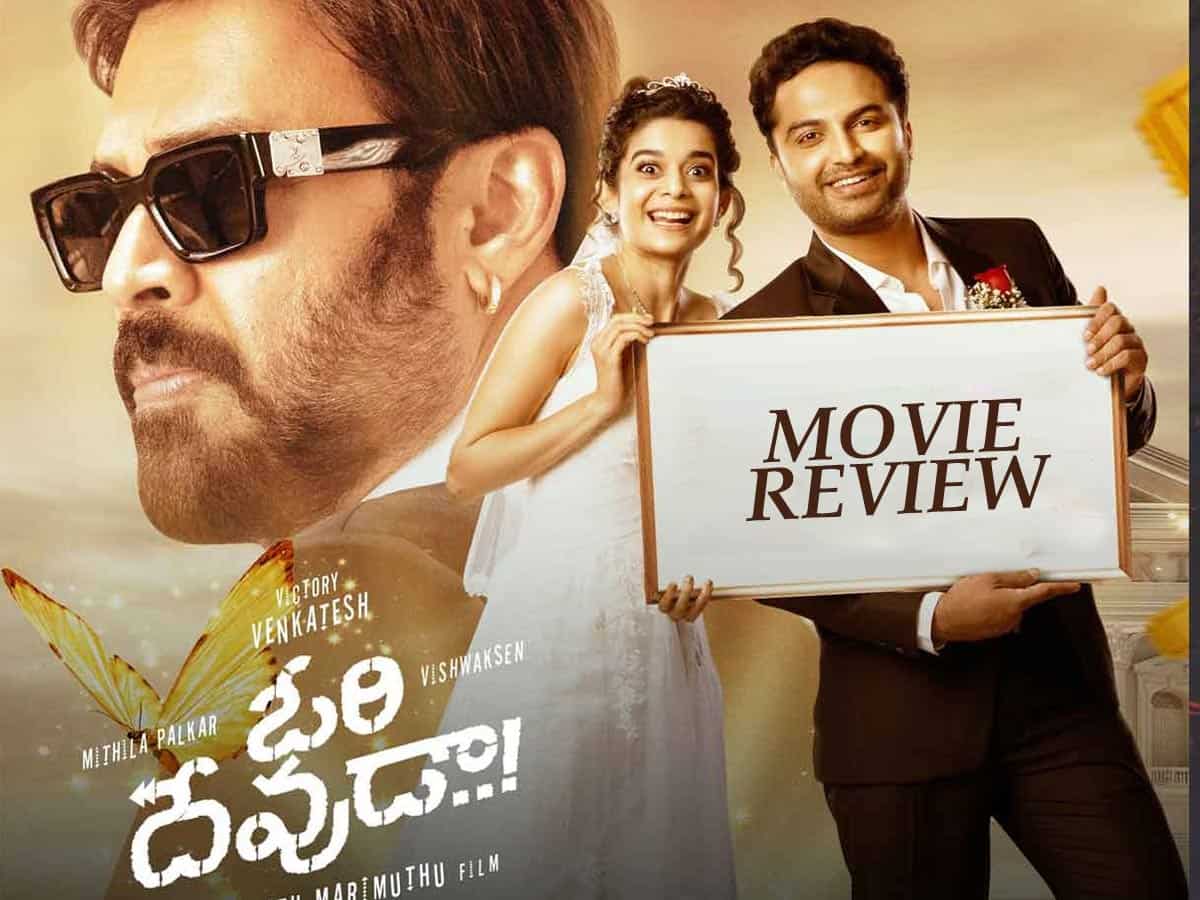 Vishwak Sen joined hands with director Ashwath Marimuthu for the remake of the latter’s Oh My Kadavule in Telugu, as Ori Devuda. Venkatesh in an important role and television famous Mithila Palkar in the female lead added more buzz to the film. Ori Devuda was released in theaters. Here is the review.

Three childhood buddies Arjun (Vishwak Sen), Anu (Mithila Palkar), and Mani (Venkatesh Kakamanu) keep up their bond as they grow up. Arjun and Anu get married though Arjun had no romantic feelings for her. They end up in a family court for divorce and one of the reasons for their conflict is Meera (Asha Bhat). In a most unexpected way, Arjun gets a second chance. Who gives him that and what happens after that is all about Ori Devuda.

Vishwak Sen did a subtle and decent performance in the role of a friend and a frustrated husband. He performed well in the emotional episodes also. Mithila Palkar is a proven actress and she did really well in Ori Devuda. Asha Bhat looked good and she did fine in her role.

Venkatesh appears in an extended cameo which has more screen space in the first half. Venkatesh fit the role perfectly. Rahul Ramakrishna appears along with Venkatesh. There are some funny comedy lines with Venky and Rahul Ramakrishna in the scene but there is a lot more scope for comedy with them involved.

Venkatesh Kakamanu appears in a friend role and he steals the show. The role he played is always loud but makes sense. Puri Jagannath appears in a small role. Murli Sharma and others did alright in their respective roles.

Ori Devuda has a good story with an interesting tweak. The background score and the song Gundellona are well done by Leon James.

The cinematography is decent. Kerala bike ride visuals are satisfying already and the background score made it more amusing. Editing is alright. The first half could have been in a bit faster pace.

Slow First Half
Lack of comedy

The story of Ori Devuda initially appears like a rom-com where two cheddy buddies get married. But their story sees a twist after a couple of fights and when they head for a divorce. What if he gets a second chance? This is where Ori Devuda is interesting and different.

First things first, the first half of the movie focuses on the story. Though there is room and chance to generate more fun, the director somehow sticks to the basic plot. The interval block is interesting. The second half is more entertaining initially and slowly slips into pleasant emotions with heartwarming episodes. The missing entertainment factor leaves the story with a dull narrative at times. Also some scenes in the second half are conventional and predictable.

We have seen a bunch of movies where friends become lovers and happily live ever after. But Ori Devuda is set in a contrasting premise where their friendship is the reason for their fights. This angle of friends getting married and one of them is not romantically attracted to the other is a new one.

The same characters we see in the first half appear different in the second half. The flip in the perspective gives the feel of 12B movie. Here in Ori Devuda, it is more like looking at life from a different vantage point. The characters of Venkatesh and Rahul Ramakrishna appear obvious from the beginning and there is no surprise element in that.

The characterizations are made well in the movie. Be it the lead actors or the role of Murli Sharma, each one has an unknown side that is pictured neatly in the latter half. Even the common friend Mani who initially appears just like a sidekick or a third wheel later proves us wrong. He is one crucial character that always made sense, though he is loud and brings laughs more than often. Also, that one line ‘Meeku cheppina ardham kaadhule’ worked each and every time Arjun says it and it is funnier when Mani reacts to it.

The director, while emphasizing that change of perspective is important in life, he also made sure that his characters do their part. Right from the friendship song, in the beginning, he hints at Anu’s feelings for Arjun. There are many such minute details that we later feel are not just random or coincidental.

The characters of Ori Devuda are more adorable by the end of the movie, as we get to see the unseen side of them. And from a different perspective, it lacks comedy and drama despite having interesting moments. Overall, Ori Devuda is a refreshing movie with heartwarming and cheerful moments in it.