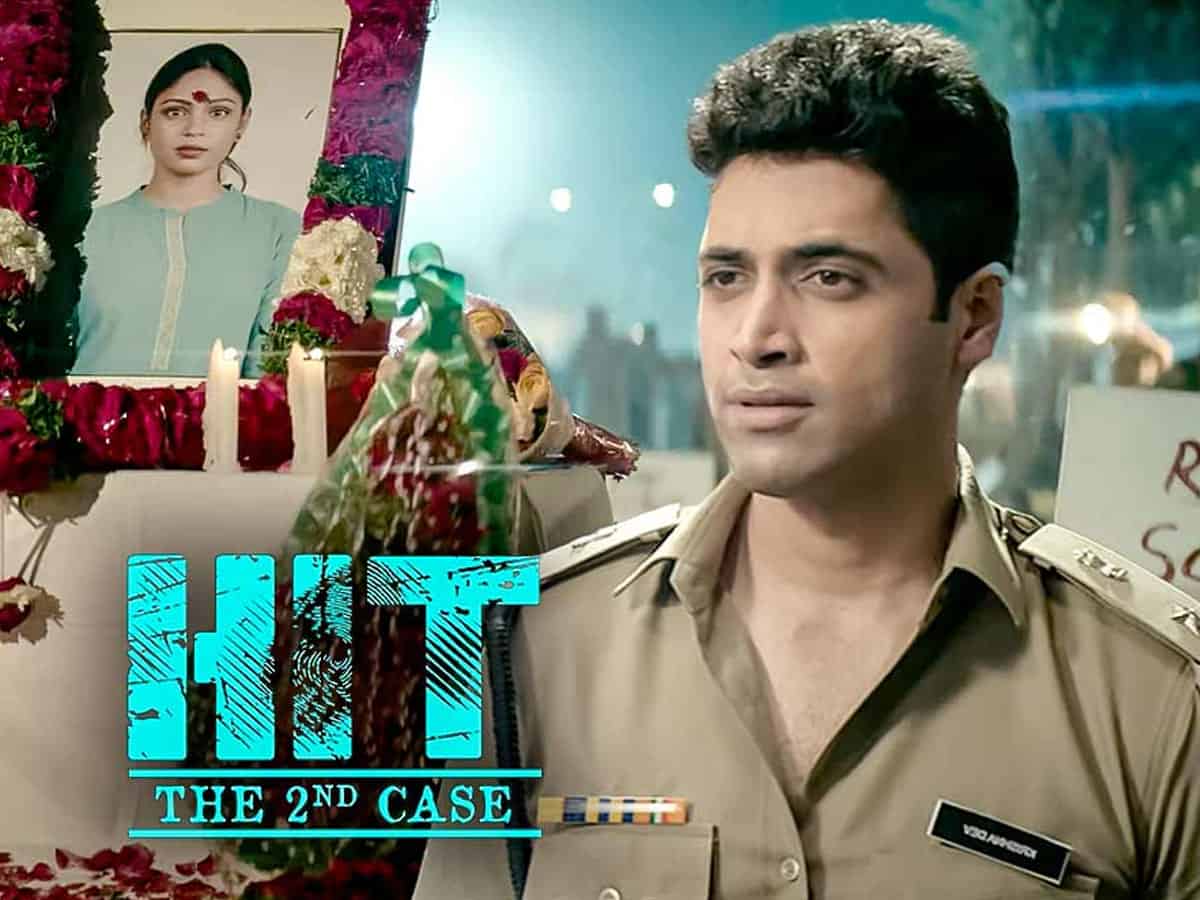 HIT: The First Case saw intense Vikram Rudraju played by Vishwak Sen. The second case in The HIT Verse is replaced by Krishna Dev aka KD essayed by Adivi Sesh. After a patriotic film Major, Sesh is back to his forte of mystery crime thrillers. He is joined by Sailesh Kolanu. Let’s find out whether it delivers an intriguing experience or not.

KD is challenged by the brutal murder of a girl Sanjana. KD learns that the murderer is a serial killer who killed anonymous girls. KD manhunts for the murderer and he is challenged by the circumstances. Who is the killer? What is the motive of murders? How KD nabs the killer and rescues his girlfriend Aarya (Meenakshi Chaudhary) is the HIT: The Second Case is all about.

Adivi Sesh is quite familiar with the setup and genre. So, he naturally gets comfortable in the role of KD. There isn’t much challenge for him either. He acts with ease. Meenakshi Chaudhary is alright as Sesh’s girlfriend. But her role has nothing much to do with the proceedings until the climax. Komalee Prasad as Varsha gets noticed. She is part of the investigation team. Rao Ramesh plays a senior police officer who is KD’s boss. He gets a cliched role. But Rao Ramesh fits the cast and delivers what is required. Suhas gets a camouflaged role. He shines in his part. Maganti Srinath is alright as SP Abhilash, who aids the investigation. Posani is seen as a media reporter. He gets a blink and miss role. Tanikella Bharani plays the victim’s father. Director Sailesh appears as a pub owner. In fact, there are some references to Vikram Rudraraju (Vishwak Sen). Hero Nani, who also happens to be the film’s producer, makes a surprise entry at the end as Arjun Sarkar.

Sailesh picks a simple mystery crime thriller. He delivers what is expected from. Neither more, nor less. Writing is simple and neat. Direction is decent. Manikandan’s visuals are impressive. John Stewart’s background score is intense and works in the film’s favour. Urike Urike romantic number is good. It gives minor relief in this serious film. Editing is slick.

Mystery crime thrillers always have a set of audience. It has its own fan base. After making directorial debut with HIT: The First Case and remaking it in Hindi, Sailesh is back with The Second Case and he gets Sesh as the protagonist. Whodunit thrillers aren’t new. But the setup, tone and cast makes HIT: Second Case demand special attention. Director Sailesh gets it right mostly. Though it’s not an arresting crime thriller, it won’t disappoint either. The film starts with KD’s life and his girl friend Arya. And then the hook scene is the murder of Sanjana.

The initial buildup is so much. Right from Sanjana’s murder to the reveal of the body parts of three other missing girls, the film draws curiosity. It feels like it picked up the pace. There is some tension and hype. It all promises to be a nail-biting and gripping mystery thriller. But it only falters as it proceeds. The nabbing of Raghavudu, suspected murderer, very early of the story indicates he is innocent. It is a predictable point. The real story begins after the Interval block.

The second half is all about whodunit and what was the killer’s motive. But when the killer is revealed and the motive is known, it looks a bit silly. It isn’t convincing enough why the killer chose only specific victims and on what basis he chose them. Even the killer’s past is not so justifying. The back story looks like filler to complete the story. The characteristics and traits of killer and his artistic talent are interesting and add some value overall though.

The investigation portions are what score in HIT: The Second Case. Though Sesh goes overboard at times and appears to be very dominative like in a traditional protagonist in Telugu movies. But it is fine since it delivers to its genre fans. Overall, HIT: Second Case is watchable thriller. The lead to HIT: The Third Case with Nani as the lead actor stands out. It brings so much curiosity on the next installment in the HIT verse.