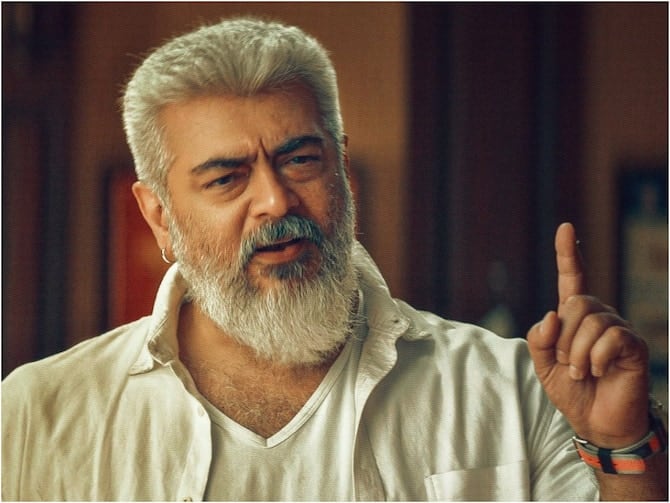 ‘Thala’ Ajith is a super star in Tamil but his films don’t have a big demand in Telugu like there. Although his films like Priyuralu Pilichindi and Prema Lekha became successful back then, he couldn’t expand his base here. Yet, there is an euphoria around his latest release Thunivu (Tegimpu) since it marks reunion of Ajith and H Vinoth (Valimai and Khakee fame). This is the first film in Telugu among Sankranthi releases. Without further due, let’s wait and see whether he would break the jinx in Telugu with this film or not.

Dark Devil (Ajith), the most-wanted gangster, is on a mission to loot a bank. He is encountered by another gang that hatched a plan to loot Rs 500 crore from the same bank. But Dark Devil has a bigger plan and a strong motive behind his mission. He is also chased by police. What is Dark Devil’s true motive and who are the real culprits behind this crime?

Director H Vinoth’s forte is crime thrillers. In Khakee, it is about documented crimes and in Valimai it’s about a gang involved in drugs. Vinoth this time focuses on a bank heist with Ajith leading the mission. The protagonist is an anti-hero. This is the spin the director has given to package an old story as fresh. This doesn’t hold fresh for long owing to half-baked script marred by artificialness and emotionlessness. Though the protagonist has a backstory and how he has personal vengeance, this revenge angle makes Tegimpu even routine. In a nutshell, Tegimpu boils down to a disengaging heist drama.

The major problem with Tegimpu is too many twists and turns which turn out to be uninteresting and predictable. While the first half portrays the protagonist with total negative shade, the second half is totally contrary. This transition failed miserably.

The protagonist doesn’t mind killing police and loss of innocent lives due to merciless shooting inside a bank. All he bothers about is his mission with a motive behind it. Clearly, the film fails to connect to audiences emotionally. The audience doesn’t take banking fraud seriously. This financial crime involves share market, mutual funds and credit cards. The information on credit cards and how banks, financial institutions make its customers use to its lending is good enough. But the main story of the heist gets deviated. There is a sequence of the live interrogation which works in parts.

Despite the shortcomings, Ajith delivers a flawless performance. His role has grey shade. He looks stylish. In the stunt scenes, there are ample fan moments. He also has funny side and imitates Michale Jackson with his signature dance moves. The first half has some comedy elements. The crime journalist scenes are hilarious and thought-provoking. However, Tegimpu has many liberties to make things easy for the protagonist. There are several bullet injuries and our hero and his partner is alive. The bullets and bomb blasts are seen throughout. Actress Manju Warrier is there full-length but her portion comes here and there. Samuthirakani is appropriate as an honest police commissioner who takes the story forward with his smartness. Ajay is confined to a corrupt police officer. All the characters performed well in this insufficient and half-baked crime thriller.

With Tegimpu, director H Vinoth’s ambition is to make a money heist-type bank heist film with all necessary ingredients of mass/commercial film. He also wants to imbibe a social message on bank frauds and financial crimes. But what he finally delivers is a template crime thriller that misses its direction in the middle. The first half and second-half appear to be two different parts. Ghibran’s background score and Nirav Shah’s visuals make this a rich and visually appealing film which acts as a blessing in disguise.

Even Ajith couldn’t rescue this half-baked and under-developed and insufficient heist-drama. Audiences are much familiar with heist films by now. So, the first Sankranthi release Tegimpu misses the target.