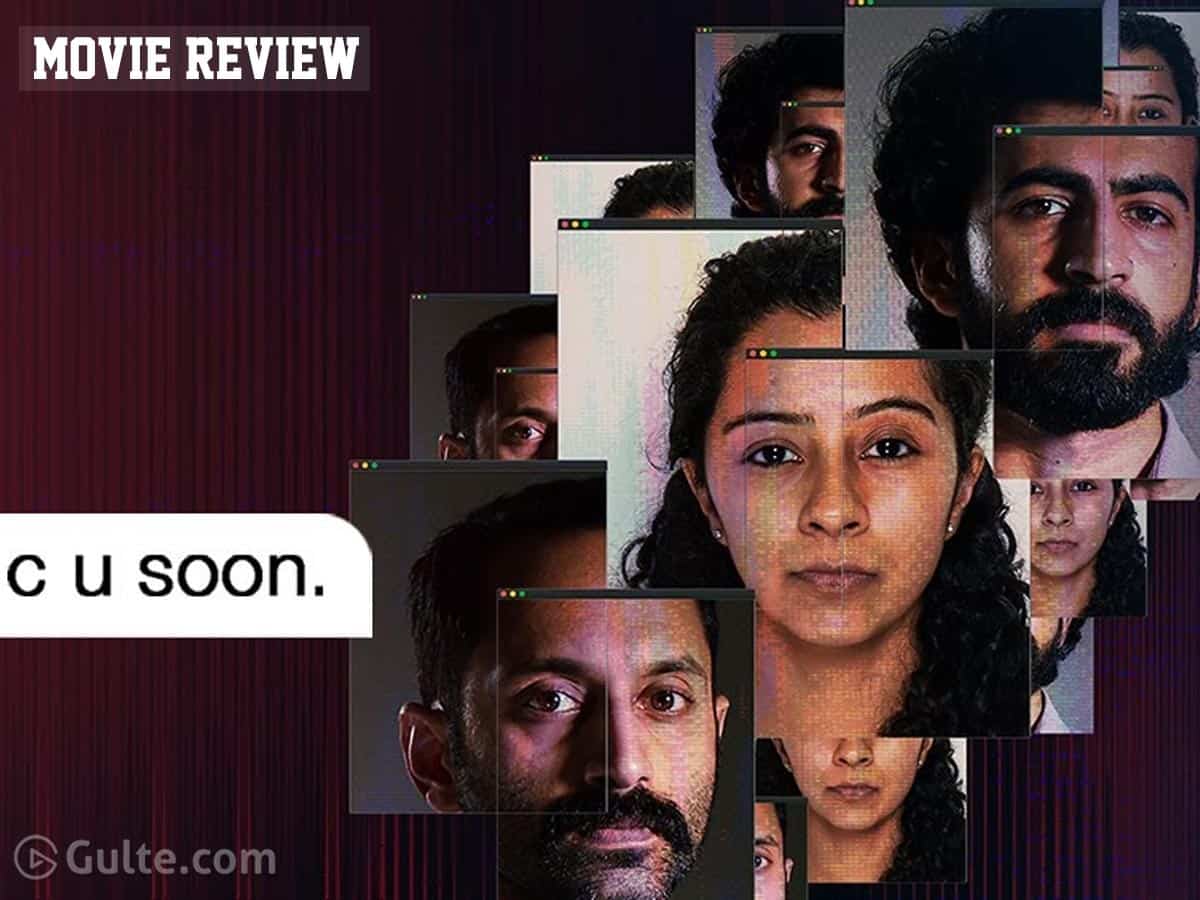 C U Soon is another feather in the crown of prospering Malayalam Cinema. As the pandemic drives everybody indoors and leaves the creative people caged in their houses, filmmaker Mahesh Narayanan has come up with an idea that can be made into a film these restricted times.

A flirty Jimmy (Roshan) finds a match on Tinder just a week after breaking up with his previous girlfriend. The girl he finds on Tinder is Anu (Darshana), looks pretty and seems alright, but there is something mysterious about her. She uses a phone without a SIM card and doesn’t answer to duo calls and texts quickly in spite of claiming to be living with her parents. Jimmy, who is hasty in making decisions, decides to marry Anu even without meeting her in person. His cousin, a cyber investigator, Kevin (Fahadh) does an e-investigation on request of Jimmy’s mother and says she is the right choice. Things take an unexpected turn and Jimmy brings Anu to his house and they start living together. But there is something that Jimmy doesn’t know about her. One day, she leaves his house by putting a video message. Jimmy is taken by the police for questioning and Kevin needs to find who she is and where she had gone by sitting in front of his computer.

There’s nothing that Fahadh Faasil cannot pull off. He can emote just by looking into a camera and make us feel his pain. He is very good as Kevin and plays a virtual superhero in his cousin’s life just through phone calls, internet browsing and text messages. Roshan Mathew is a perfect fit as the guy who is smitten by the girl he met online. He is good in the scenes where Jimmy is anxious and worried about Anu’s whereabouts. Darshana is so good as Anu, a girl that goes through inexplicable trauma and horror. Rest of the actors have done their bit.

Mahesh Narayanan is clearly inspired by the storytelling techniques used in movies like Searching and Unfriended, but the story and characters make it an entirely new viewing experience. It is extremely hard to visualize a movie like C U Soon and pull it off without much complexities. No wonder he is also the editor and virtual cinematographer for this film. Some ideas are hard to explain to others and bring them as visualized onto the screen. His direction is taut and on point and his script is water tight that keeps us glued to the screens. Music could have been better. Editing is superb as the story switches from mobile screens to computer screens to chat windows to CCTV camera footages.

Movies are meant to be watched on big screens, but C U Soon is a film that is made for watching on a small screen, mobile screen to be precise. Yes, many scenes in C U Soon leave so much blank space even on your laptop screens, let alone Television screens. Story happens on multiple tabs opened on a computer screen and many dialogues are presented in text form in chat windows. You just cannot take your eyes off the screen as you might miss some important detail by doing so.

Despite telling the entire story through screens, C U Soon is as engaging as any perfect thriller out there. Movies using this technique usually tend to leave the human emotion aspect aside for the sake of thrills. But director Mahesh Narayanan makes us feel for the characters and root for them to overcome the hurdles. C U Soon doesn’t waste much time getting into the thick of the things. None of the characters are given much details except for a few lines to decipher. Anu’s character is the mysterious element about the story and we will get to know about her only through the online investigation of Kevin.

The twists are effective and the story is extremely believable, which makes C U Soon all the more a powerful viewing experience. Director could read the mind of his audience, which is why he puts tough questions to Jimmy through Kevin. All the three actors who played major roles have come up with brilliant performances to make this a successful attempt at making new age cinema. There are few minor gripes here and there, but can be easily overlooked because of the effectiveness of the storytelling and filmmaking.

Wish this film was dubbed into other languages so that it reaches a wider audience. C U Soon is a film that will inspire many filmmakers to think out of the box and make movies that are best suited for OTT viewing.