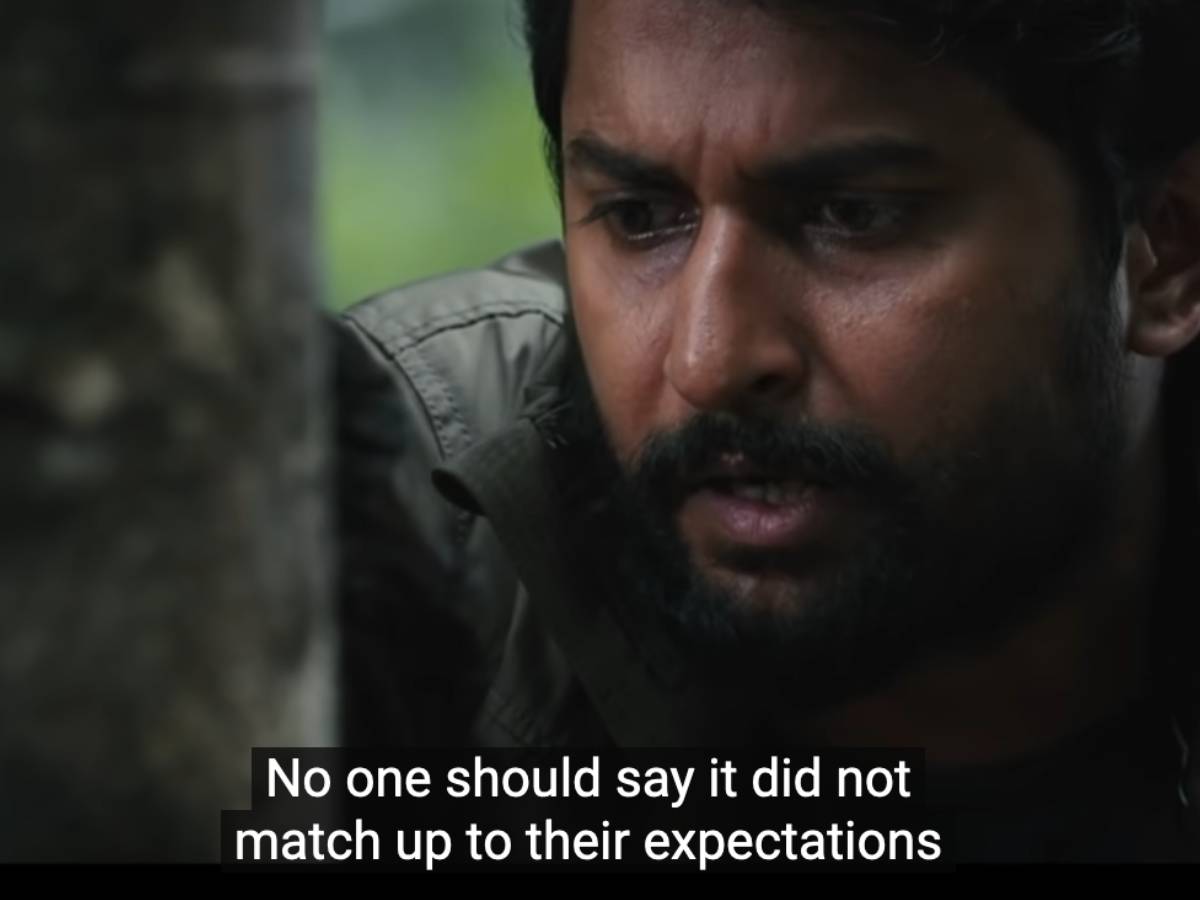 V is the first big movie to opt for OTT release as the theaters remained closed during the pandemic. There were a lot of expectations on the movie with Nani and Sudheer Babu playing the leads and a talented filmmaker Mohana Krishna at the helm. However, sadly, V turned out to be a disappointment.

DCP Aditya (Sudheer) is considered as the super cop by the media and public with an impeccable record. A brutal murder happens and the killer directly challenges Aditya. The killer goes on a killing spree and leaves his signature ‘V’ on every corpse. V aka Vishnu (Nani) also keeps calling Aditya from various unknown numbers and keep on challenging him by giving out the details about where the next murder would take place. Why is Vishnu killing everyone? What does Aditya find about him?

Nani does his best to make V an engaging fare with his performance. The character is different from what he usually does, but it isn’t novel. Sudheer Babu gets as equal if not more footage as Nani and he makes sincere effort to do justice to his character. Aditi Rao Hydari appears in a guest role and Nivetha Thomas plays a character that doesn’t make any sense. Vennela Kishore, Naresh, and Tanikella Bharani are the notable actors among others.

Mohana Krishna Indraganti’s movies are largely enjoyable in general. He is known for making light hearted entertainers. V is a crime thriller that is different from his previous films. V has an interesting plot, but it is poorly developed with many absurd and some downright silly scenes. Trying to present it in a commercial format backfired big time as V doesn’t even raise to the average mark at any point. Thaman’s background score is loud but captivating. Cinematography is good in action sequences. Editing is not up to the mark. Few dialogues are good. Production values are decent.

V is promoted as a different film, but turns out to be a routine fare. Anyone who saw the trailer would have guessed that Nani is killing people for a strong reason. And V reaches that point in the most predictable way possible. Nani’s introduction and the consequent challenge to Sudheer’s character seems interesting. But the narration falls flat with Sudheer’s character never seeming to be potential enough to stop Nani from killing the next person.

Sudheer’s romance track with Nivetha Thomas only made his character weaker and appear aimless. Nani doesn’t have much to do besides killing people using different techniques. Hence, the director inserted a couple of comedy scenes in between and Nani had fun doing those. The actual idea of the film is to present it as a cat and mouse game, but it never gets exciting as Nani is always exactly one step ahead of Sudheer.

The predictability of Nani’s backstory is the biggest drawback of V. Director Indraganti Mohana Krishna comes up with a poorly written back story that is neither engaging nor emotional. The army episode is thrown in just to make the killer’s character authentic for being one step ahead of the cops. There are many movies where the hero does crime to bring bad people to justice and a sincere cop trying to stop him.

Nani has been picking good scripts lately, but V has nothing new on any front. He is presented like a typical action hero, though. He did his best despite the shortcomings. OTT release is like a blessing in disguise for V as it doesn’t have enough goods to become a winner at the box office.