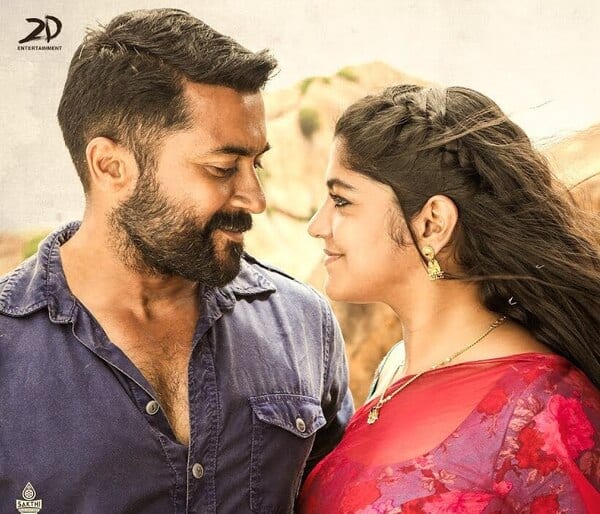 Suriya has finally arrived after a series of disappointing films. Aakasam Nee Haddura proves why he is rated as one of the finest actors of this generation. Sudha Kongara has made an inspiring movie based on the book named Simply Fly.

Chandra Mahesh aka Maha (Suriya) dreams of building an airline company for everyone to fly. However, he faces hurdles at every step from the bigshots who are already running the aviation business. Paresh (Paresh Rawal) who runs one of the biggest airlines in India makes life a living hell for Maha. But he doesn’t give up. He keeps coming back every time he is put down. How Maha fulfils his dream against all odds makes this film an inspiring tale to watch.

Suriya may have made some poor choices in recent times with respect to script selection, but he has always given his hundred percent as an actor. The talented actor finally gets a script and character that does justice to his talent and he has breathed life into it. There are so many scenes that are elevated by his earnest performance. This is easily the best performance of the actor till date. With Aparna Balamurali’s Baby character, Sudha Kongara breaks all the stereotypes of a movie heroine. She is excellent playing the role of a strong-willed woman who loves her husband unconditionally. She also has a dream of her own and is successful in achieving it.

Mohan Babu gets limited screen time but makes his presence felt. Paresh Rawal is good as the corporate villain who looks down on the poor and ruthlessly crush their dreams. Urvashi is good as Maha’s mother. Karunas is impressive among the rest of the star cast.

Like in her previous film Guru, Sudha Kongara yet again picks the story of an achiever. She is a fine storyteller who also focuses on the commercial aspects. There are so many instances where we admire the direction. The screenplay gets a bit repetitive in the second half as the protagonist is let down many times. However, she made sure to keep the audience emotionally invested in the story of an underdog.

G.V. Prakash Kumar’s songs mostly play on in the background and they are okay. But his score helps the film soar high. Cinematographer has done a wonderful job in translating the director’s vision on to the screen. Editing could have been crisp as the film feels tad too lengthy in the middle portions. Production values are superb.

Aakasam Nee Haddura is based on the life story of Air Deccan G.R. Gopinath. Director Sudha Kongara takes few points from his real life story and fictionalized it to be a feature film filled with many awe-inspiring moments. The film is about a commoner who dreams to launch an aircraft company. Aviation business is not something that a layman can understand, but Sudha Kongara tells it in the most simplistic ways for everyone to follow.

Directors can get carried away when telling such stories as they ignore other essential aspects of a successful film. But Sudha Kongara ticks all the boxes of a commercial film in spite of not getting side-lined from the main plot. There is ample drama and emotion in the film that will instantly make a connection with the viewer. Underdogs stories are always fascinating to watch and this film is no different.

It almost sounds boring when Suriya’s character first tells about what he wanted to achieve. Thankfully, Sudha Kongara makes it an exciting story to follow with a well knitted screenplay. Credits to the director for writing a beautiful character for the female lead who plays a pivotal role in the protagonist’s journey towards achieving his dream. The romance part is simple yet effective without getting in the way of the main story.

The first half of Aakasam Nee Haddura is superb, but the second half is not a smooth ride as the scenes get repetitive and the story gets dragged on. However, the director ensures that it has a smooth touchdown with an emotionally high climatic sequence. There are some instances where scenes are dragged on and on. The villain’s role also is one-dimensional. Barring a few shortcomings, Aakasam Nee Haddura is a fine film that will end the woes of the film lovers that are repeatedly let down by the direct to digital releases this year.