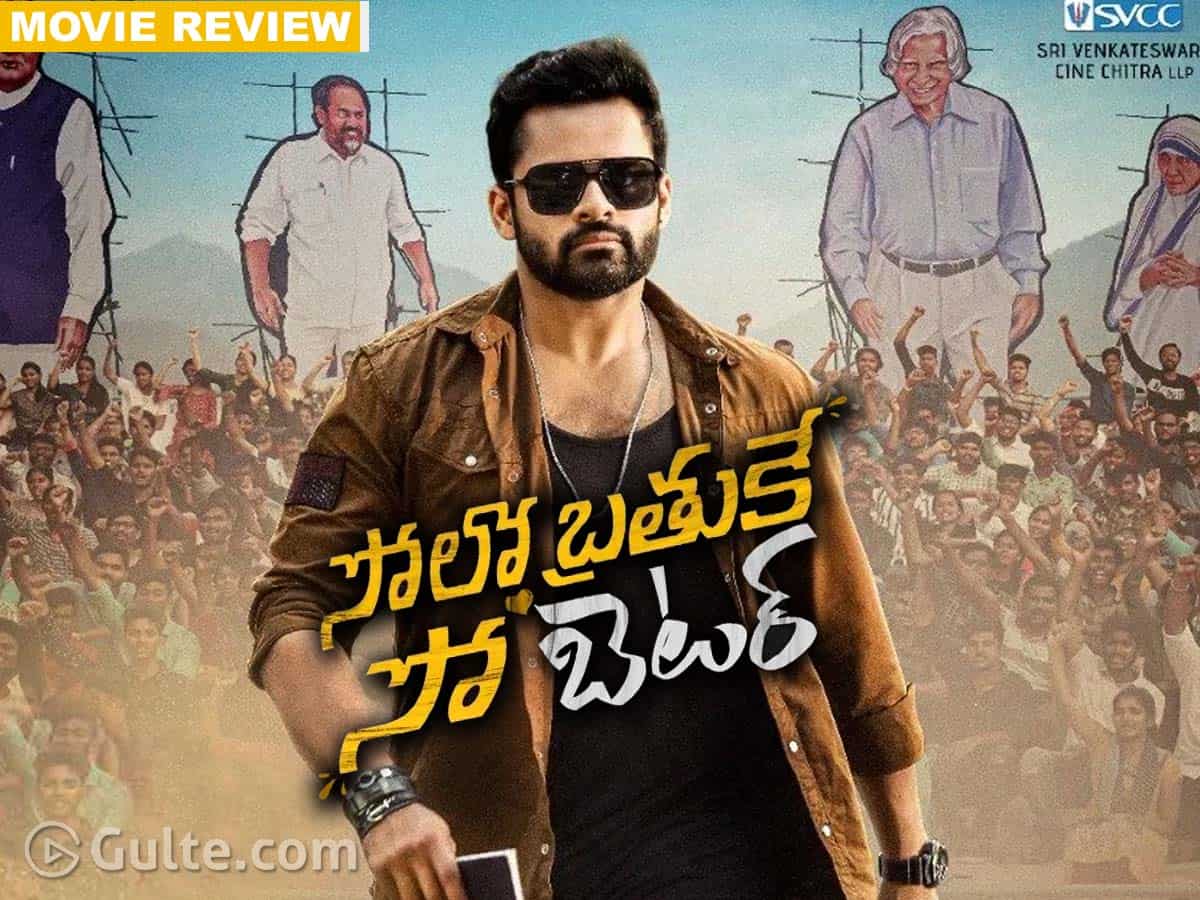 It’s been more than ten months since a notable film released in theaters. Solo Brathuke So Better is the first major theatrical release post lockdown. Many are anxiously waiting for the film’s result as it will restore faith in the film trade if it does well during this pandemic.

Virat (Sai Tej) believes in the philosophy of staying single. He not only practices but also preaches about the singledom. Everything goes well until Virat realizes that Solo Life is soulless. He falls in love with Amrutha (Nabha Natesh), who is a staunch follower of Virat’s single sutra. How Amrutha realizes that being Solo is not ideal forms the rest of the story.

Sai Tej looked confident as Virat. His comic timing has improved a lot and also did well in emotional scenes. Nabha Natesh plays a bubbly character that only makes an entry in the interval scene. She is alright. Rao Ramesh’s character is not properly etched but his performance stands out. Rajendra Prasad plays the heroine’s father and Naresh is seen as the hero’s father. Vennela Kishore’s and Satya’s comedy works here and there.

Debutante director Subbu pens a characterization based story and gives it a commercial treatment. Initial portions of the film look hurried and clumsy. His direction gets better as the film approaches the midway mark. Some portions are fun to watch, but the director fails in getting the emotions right. Thaman scored a couple of peppy numbers. Hey idi nenena and No Pelli are good. There’s not much scope for background score. Cinematography is just okay. Editing is neat. Production values are alright.

Solo Brathuke So Better is a character driven plot where the protagonist preaches the benefits of singledom. He doesn’t care about family emotions and hangs out with his single friends all the time. But he is left solo when all his friends decide to part ways with him and get married. He slowly realizes how hard it is leading a single life without someone to care about. A sequence of events later the protagonist is convinced that Solo life is not better and looks for a suitable bride.

There comes another twist in his story when the only girl he loves turns out to be an ardent follower of his Solo ideologies. He couldn’t express his feelings but wait for her to realize on her own. The characterization of the protagonist is relatable and there are a couple of nice twists in the story. However, the ending is predictable and most of the scenes are pointless. Even comedy scenes fall flat at times. Director couldn’t evoke emotions despite having a bunch of characters that could have served the purpose.

There’s no backstory to Virat’s ideologies or there is no proper explanation to why he believes in singledom. At least Amrutha’s character is introduced with a bit of backstory for believing in Solo life, but Virat’s introduction seems messy. The realization part gets proper screen time, but there’s an unwarranted hurriedness at the start.

Pre and post intermission parts are good with nice twists, but the rest of the film is very flat and dull. Again, the climatic portions are clumsier without proper payoffs. On the whole, Solo Brathuke So Better is a strictly average fare with everything including the romance, comedy and family emotions failing to click.