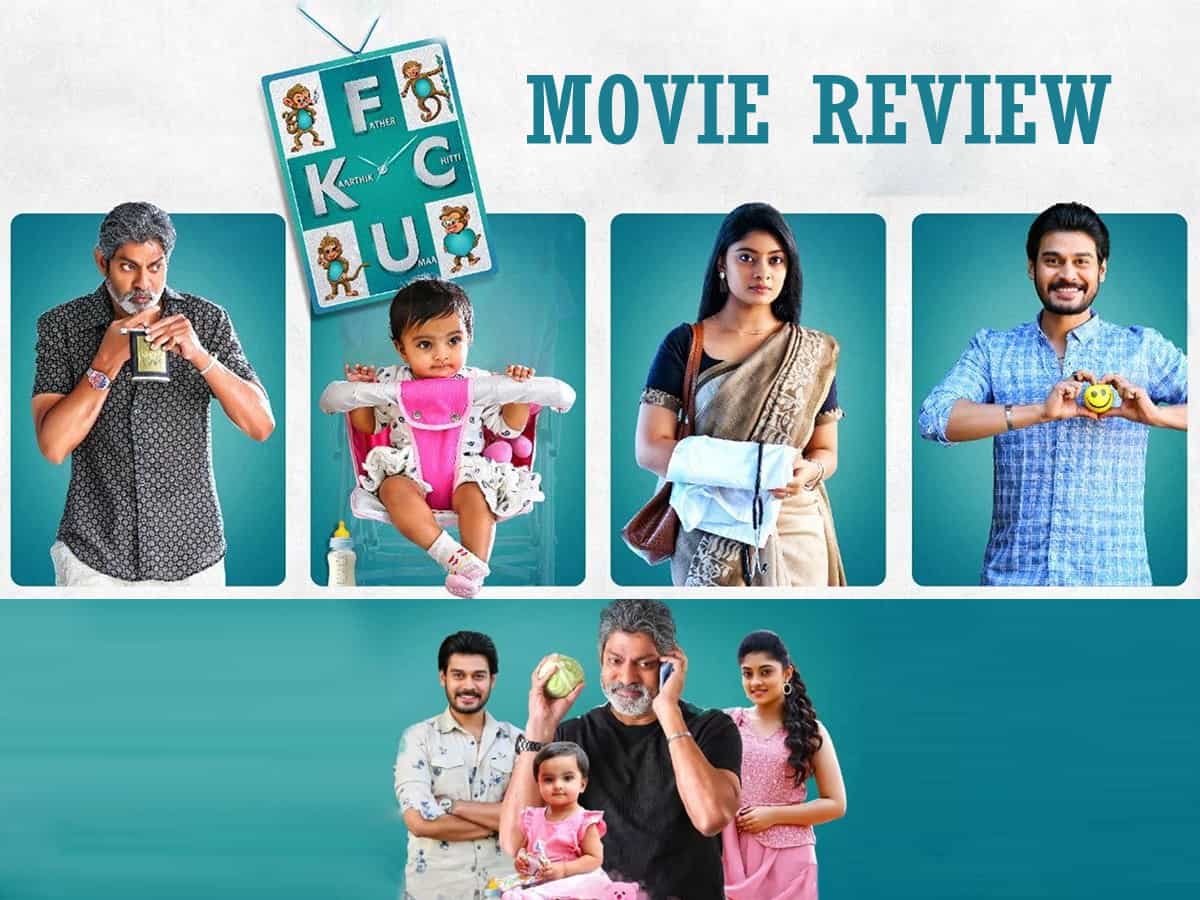 FCUK promos garner eyeballs for portraying Jagapathi Babu in a flamboyant and playboy role. FCUK is produced by KL Damodar Prasad who produced tasteful films like Ala Modalaindi. All this has raised curiosity about the film. Its unique promotion with the Youtubers too made noise online. However, the film failed to deliver. Living up to its title, the film is FCUKED UP. Check out what the makers have got it right and what they have got it wrong.

Fani Bhupal (Jagapathi Babu) is an astute businessman and a leading distributor of a condom company in the two states. He believes in numerology and that’s why F replaces P in his name. Fani is a happy-go-lucky person. Not catching up with his age, he has multiple affairs. He has grown-up son Karthik (Ram Karthik) who is a wedding planner, ‘bridull’ (bridal) groomer. Karthik and Fani Bhupal are more like friends who booze together. They often refer to each other as Tom and Jerry. Karthik, however, isn’t a playboy like dad. Karthik encounters Uma in a pub and it was a feeling at first sight. Both are in inebriated condition. Karthik and Uma didn’t see each other’s faces but got attracted to one another. And they part. Not knowing that they had met earlier, Karthik and Uma meet again. Uma is a pediatrician. Both develop feelings for each other again. Meanwhile, Uma’s life takes a major turn as she gets engaged to PHD (Bharath) by her family members through an arranged proposal. Whereas Uma has hidden feelings for Karthik. Karthik and Uma’s love gets further complicated when 60-year-old Fani Bhupal gets to know that he has a toddler child Chitti. Chitti is born to Fani Bhupal and his prostitute girlfriend Kalyani. Chitti changes the lives of Fani, Karthik and Uma. Rest of the film is all about how Karthik and Uma win their love and how Fani Bhupal deals with this and takes on the orthodox beliefs of the society.

Jagapathi Babu is perfect for the role of Fani Bhupal. He is apt for the role. He pulled off the role with ease. The character has multiple shades. After Chitti’s entry, Jagapathi Babu’s character takes a new turn. This is interesting. Ram Karthik is good. Ammu Abhirami as Uma shines in this rom-com laced with drama and family elements. Bharath is okay as PHD who does his research on relationships. He does some mediocre comedy. His logic of breaking bond with heroine Uma is senseless.

Director Vidyasagar Raju has got a bold story in hand. It is an adult comedy with full of double-entendres. They evoke some laughs. But this bold story is lost in the narration.It is failed in its execution. Especially there are scenes that go haywire in the second-half. There are plenty of predictable scenes. Music is decent.Background score is good as well. Cinematography is passable. Editor seems to have forgotten to scissor out the unwanted scenes in the film that have liberally used.

FCUK deals with the point of why an elderly person shouldn’t have sexual desires and shouldn’t have fun. The film sounds good on paper but it doesn’t raise properly to the big screen. The story has good scope but the makers couldn’t deliver. While the first half is so so with light-hearted elements, it is the latter half of the film that takes away the few good things in the film. FCUK has adult content and double-entendres.

After Chitti’s entry, the film that is supposed to turn out interesting, falls flat. Many subplots, unwanted scenes such as the Daba fight episode look forced and unnatural. That’s when the film gets diverted from the story.

Long duration, sluggish second half, draggy climax mar FCUK. Especially the climax portions go on and on and on. Don’t ask us how the family issue of Fani, Karthik became a state news and what value does it add to the film. On the whole, FCUK is FCUKED Up.