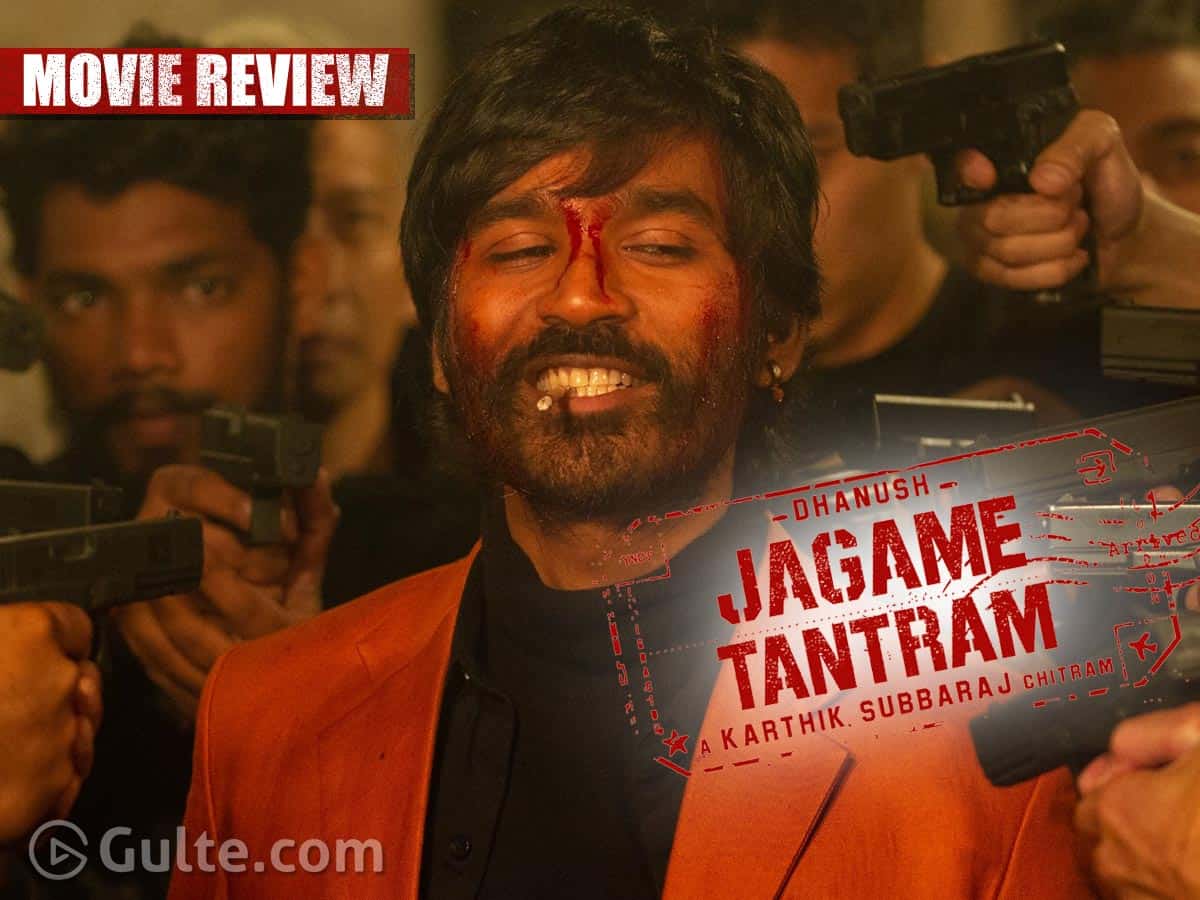 The much-awaited Tamil film Jagame Thandhiram was released on Netflix this afternoon. The film was made available in Telugu, Kannada, Hindi, and Malayalam audios, along with the Tamil version. Karthik Subbaraj is the film’s director. Dhanush played a gangster in the film.

Suruli (Dhanush) is a local gangster in Madurai of Tamilnadu. Apart from running a Parotta restaurant, Suruli also executes murder. One fine day, he lands in London to carry out an assignment by Peter (James Cosmo) to kill Sivadoss (Jojo George). Suruli executes Sivadoss killing perfectly and emerges big in London. However, Suruli realizes that he’s made a mistake by executing Sivadoss, who is fighting for a cause. The rest of the story is about how Suruli confronts Peter and stands for Sivadoss’ cause.

Dhanush is a rockstar, and he proves it with every film. In Jagame Thandhiram, Dhanush brings a unique swag to his character, inspired by his father-in-law Superstar Rajinikanth. He is full of energy and swag throughout the film and delivered an entertaining performance. Jojo George is a brilliant actor, but unfortunately, he is wasted in a poorly written, weak gangster role. James Cosmo fits the bill perfectly and acts well. Unfortunately, female lead Aishwarya Lekshmi has no scope to perform. The rest of the cast hardly makes an impact!

The film is made on a grand scale, and the visuals say it all. There is no compromise in terms of production values. The output looks rich, and the camera work is exceptional. The tone of the film is in accordance with the mood of the story. Except for the Rakita Rakita song, the rest of the songs in the audio album fails to impress. The background score lifts the film beautifully. Santosh Narayanan maintained a perfect level of score in highlighting the film. The slow and fast beats go according to the emotion in the scene. His score is one of the major highlights of the film. A lengthy runtime is a big minus.

Director Karthik Subbaraj is known for mixing humor into a commercial story and driving it with an engaging drama. He has done this in the past and tasted success, but he failed to impress the audiences this time. The only factor that put him away from tasting success is the story that fails to give an emotional connection to the audience.

Karthik Subbaraj came up with a gangster drama. The first half of the film is all over the place as the director decided to tell the actual story in the second half. This delay caused a lot of boredom to the audiences. The director makes it very clear to the viewers that Suruli goes to London on purpose. Whatever Suruli does in London brings laughs to the audiences, but the story goes nowhere.

Karthik Subbaraj wanted to discuss the issues of immigrants, the plight of Tamil Srilankans, pointing our political issues, commentary on racism, and other sensitive elements. It can be blended well with all the other commercial elements, but the director treated them separately. While taking the film forward in a commercial vehicle, the director suddenly stops, brings in a serious element, and continues his journey. As a result, the viewers are not moved emotionally by the important issue raised on the screen.

The film loses the grip in finding a balance between using Dhanush’s star image and telling a serious issue in an undercurrent manner. It feels like the film has come to an end at the interval point because there is no strong villain or enough conflict that keeps us waiting for the second half. The second half is to talk about the issues of immigrants, but it all makes no sense because of the half-baked drama in the first half.

On the whole, Jagame Thandhiram struggles to keep you invested and constantly tests your patience.

PS: The Telugu dubbing is too bad, and even the subtitles go for a toss in translating the dialogues.