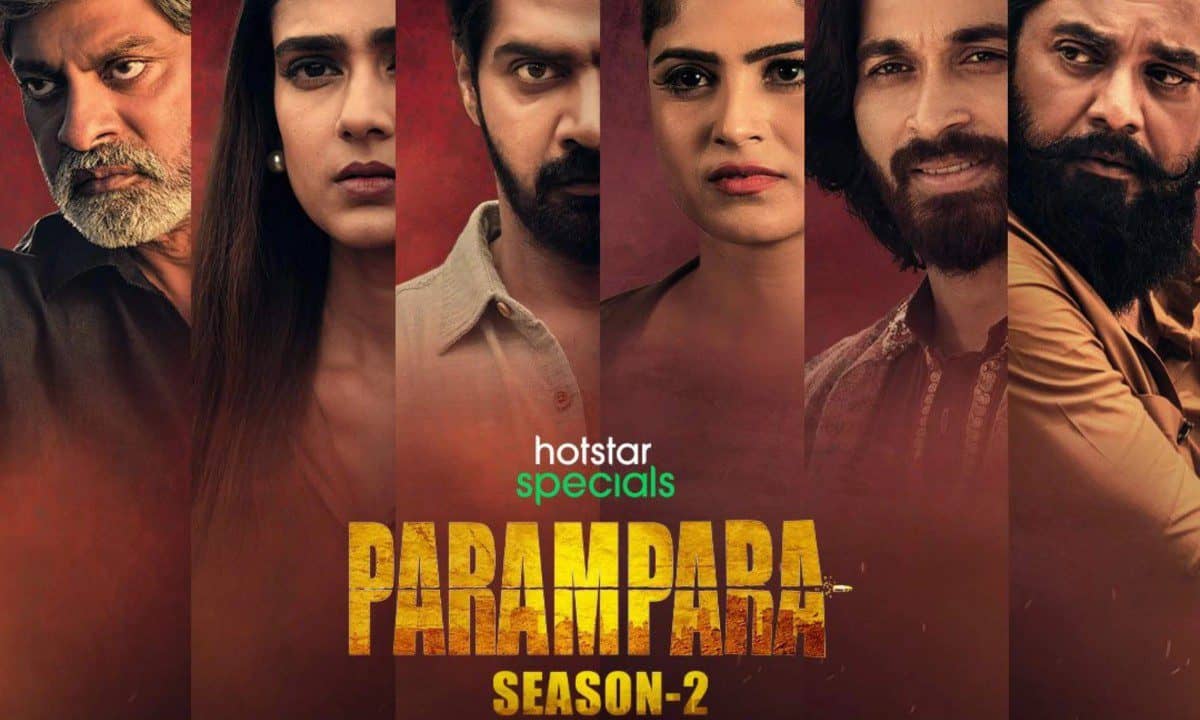 Telugu web series’ are on the rise these days on OTT. After the well-promoted season one of Parampara, Disney Plus Hotstar is ready with season two which is streaming now. The show has some big names like Sarath Kumar, Naveen Chandra, and the versatile Jagapathi Babu. It is directed by Krishna Vijay L and Vishwanath Arigela.

During the end of season one, Gopi(Naveen Chandra) goes to jail for possession of an illegal weapon. There, he gets close to Ratnakumar(Ravi Varma) who later suggests Gopi finish his uncle Nagendra Naidu(Sarath Kumar to bag the ultimate post and also to restore the authority of his father Mohan in public. Gopi’s cousin Suresh is also vouching for the big post. Who wins the battle of power and what role does a big name like Jagapathi Babu play in this power of egos is the essence of Parampara 2.

Parampara is a show filled with notable actors from Tollywood. But it is Naveen Chandra who shines in this season. He has already done negative roles earlier but here in this series, Naveen is menacing. His cunning nature, desire for the big post, and jealousy are brought out effectively. Sarath Kumar is the towering personality in this series but he should have avoided dubbing in Telugu. Jagapathi Babu is subdued for the most part but kills it by the end of the series. Akanksha Singh and Bigg Boss fame Divi get enough scope to shine. Nani Ganguly is wasted in her role and Kasturi is impressive in her small yet convincing role. Amani’s role also lacks impact.

Season one of Parampara was trolled for its excessive length and looks like the makers have worked on this aspect. The editing is fine-tuned and there are not many scenes that feel lethargic. The visuals and production values look rich as good money is spent on establishing the crime setup of power politics in the mining backdrop. Naresh Kumaran has scored the BGM and his work is appreciable for the most part. The writing is slick as the plot is brought to a conclusion quite effectively. Dialogues are well written and suit the nativity of the web series.

Parampara as the title suggests is about getting the ownership to reign the kingdom. The first season was set up in a way that characters related to this power crisis were only established. In going way too detail, the essence of the plot was lost. But director duo Krishna Vijay L and Vishwanath Arigela have made matters interesting by reaching the point without any fuss. The power crisis and the issues in the family have been showcased through good scenes in the early episodes of the series.

The plot is such that there is scope for an intense drama but that is missed somehow. In order to wrap up the show quickly, there are a few characters that are left hanging, and one gets confused with their inner turmoil. The series has ample moments to create tension for the audience but that does not happen as the drama revealed is ordinary. A few elements like the rise of Naveen Chandra are not established properly in the show.

The show also has a mining backdrop that looks pale and does not create a novelty factor. But what keeps you going on to enjoy this show is the mature performances of the key cast. As there are multiple stars in key roles, the padding is solid and the weak scenes look passable. One scene which draws your attention is where Naveen Chandra delivers truths about Sarathkumar’s flawed psychology.

The series also has various subplots such as bauxite mining, blackmail, and Akanksha Singh’s episode. But sadly, they do not adhere properly to the narrative. Such crime-based power-hungry stories are nothing new for us. But the manner in which the series is narrated at a fast pace looks fine. When compared to the first season, Parampara 2 makes a lot of sense but has its own limitations.

Bottom Line – Better than season one

CLICK HERE!! Watch “Parampara 2” Series Only On “Disney Plus HotStar”