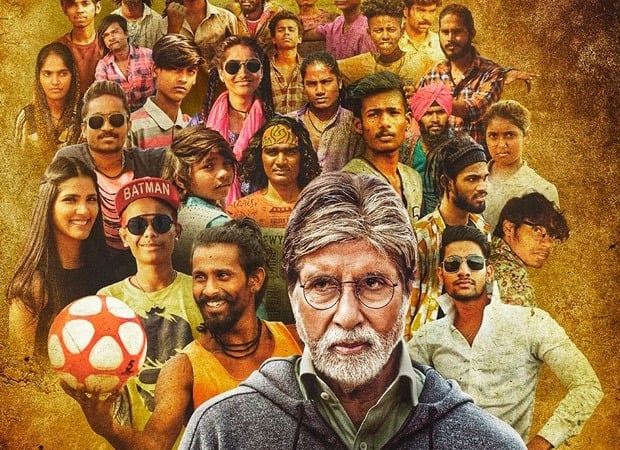 Jhund was recently caught in a case of copyright violation, a director named Nandi Chinni Kumar filed a case as he is also making a movie on the same personality that inspired Jhund’s movie story, Vijay Barse (the founder of NGO Slum soccer) however high court based on first impression passed a temporary order to release the movie on respective zee5 platform Friday.

Nagraj Manjule carved his image as one of the most important filmmakers in Indian Cinema at present, with ‘Fandry’ and ‘Sairat’ movies, he made a remarkable impression among the audience and critics with his portrayal of solid realism accompanied by stunning drama and a constant honesty fueled voice against oppression.

When Such a Director teams up with a legendary actor like Amitabh Bachchan, naturally there will be some expectations, and Jhund lives up to it for the most part.

Jhund deals with the story of a sports teacher Vijay Borade who is on the verge of retirement and his journey with the slum kids whom he wishes to change, to make their lives better through Football games as he was able to observe their hidden talent in the game.

First and Foremost the best part of the movie is the earthy feel of the slum that director Manjule evokes unapologetically, almost all the key youngsters and their characterizations from that place leave some impact on you, they seem real, they act naturally without overdoing, you feel like you’re watching them at a close distance, and of course, Big B performance as Vijay Borade was as great as you expect him to perform to be, His dialogue delivery still got that bewitching charm that pleases you like anything, Manjule captured his enactment of emotions very subtly and they grow on you very naturally as the movie progresses.

There are some fine touches that Nagraj Manjule sprinkles all over the movie to reflect his “Mark”, there is a scene where some set of youngsters went to an adult movie, and when they hear football dialogue in that, they leave the theatre and come to the ground, it’s like inspiration can be found anywhere, but the thing is they were to able to come to this ground from some filth they were watching, the ends are completely opposite, but all it took was little growing change to push them to grounds.

There is another scene where we are shown various kids/youngsters of slum talking about their difficult life, and the kind of work they do, now in the next shot one of these youngsters starts playing banjo, and it’s Jana Gana Mana theme, and it slowly overlaps these talks beautifully, it displays the diversity of our country and yet all are one as Jana Gana anthem, it was very moving, there are many such heartful things that Mannjule conceived in Jhund.

It’s those brilliant touches that put a smile on your face, making you forgive the major flaws the movie bites. Manjule Writing is quite good in the first half, and quite adequate in the second half, the establishing scenes of the slum and youngsters of it are done quite effectively, the scenes of Vijay drawing those kids and youngsters into the game, the first match these kids face, all these moments are riveting, there is great energy in these sequences that Manjule brings it out without wasting anything, however, it’s in second the movie loses its momentum a bit, the pace drops with the inclusion of subplots, there is a subplot of a girl from a rural area trying very hard to get a passport, we get it Manjule wants to talk about the complexity of living beings in rural areas, displaying that only documents decide our existence and how much difficult it is for people to get those, people who still exist in our country without any kind of documents, Manjule tries to make us acknowledge that but it’s just doesn’t sit with the movie’s main narration, it acts a speed breaker that we must patiently sit and pass-through and also the hard hitting emotions one expect from Manjule’s movies are also missing here.

Technicalities wise Jhund is neat, Cinematography by Sudhakar Reddy Yakkanti is good, and the camera movements in key match sequences are exhilarating to watch. Music by Ajay- Atul is foot-tapping, especially the title track, it gives enough kick to shake your body a bit, and the score by Saket Kanetkar is fine, all the background tracks are delicately included, and they carry the situations and emotions with suitable notes without being loud. Editing by Kutub Inamdar, Vaibhav Dhabade is very good in the first half, had they been exactly strict in holding their scissors in the second half, the output would’ve been much better, 2hr 49mins runtime definitely tests one patience at a few scenes.

Negatives :
1) The pace drop in narration in the second half
2) Not so engaging subplots
3) Lack of hard-hitting emotional moments

Bottom Line: Jhund is not as great as Manjule’s predecessors but it definitely has some great life in it that makes it worth watchable, strong performances and some nuance filled moments end up making you put a satisfactory smile on your face by the completion of the movie, it’s inspiring without any exaggerated moments.