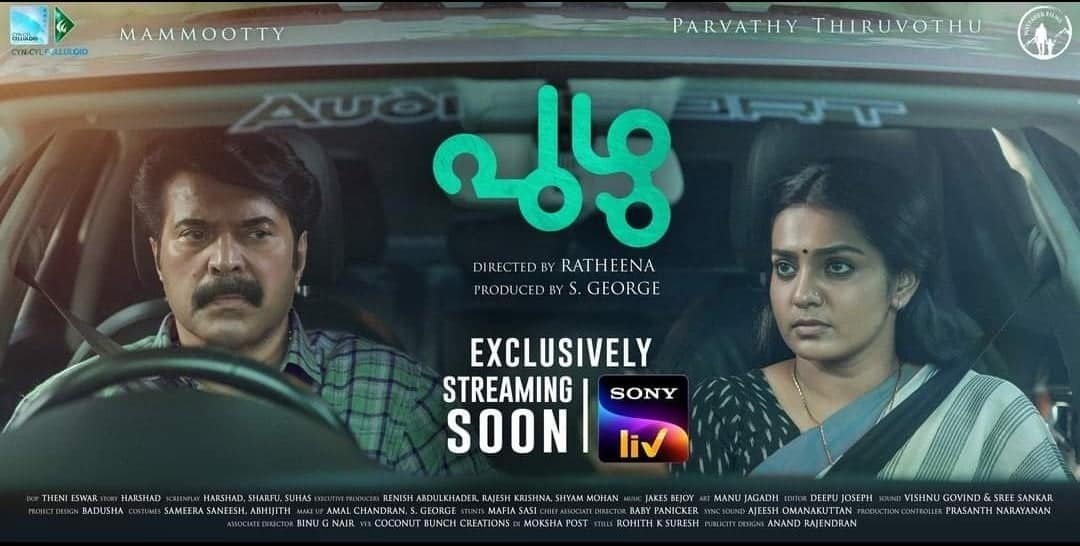 Ever since ‘Kasaba’ movie issue, when Parvathy opined against a problematic scene in that movie, there has been some friction that developed between Mammmoty fans and Parvathy Thiruvothu, so when an announcement came saying that Both Parvathy and Mammootty are to be seen in a movie called “Puzhu”, everyone hoped this might calm the issue that’s been between fans and actress, So there was some curiosity factor surrounding the release of Puzhu, it finally released on SonyLiv on last Friday, let’s see how the movie is:

Puzhu is a very subtle movie that mixes drama and thriller genres with a bit of psychological touch, it deals with two-story lives, one is of Kuttan(Mammooty), a police officer with old school values, and his strict nature of dynamics affecting badly to his son, other is of Bharati(Parvathy), sister of Kuttan who married a theatre artist Kuttappan (AppuniSasi) against her family wishes. However, things start to heat up when Bharati and her husband make their move into the apartment in which Kuttan is staying, what follows next is a creeping drama with some intriguing scenes consisting of menacing Mammooty.

The story by Harshad is very novel, very rarely do our filmmakers deal with issues such as stress and paranoia, addressing the severe consequences of having terrible mental health, Harshad had one hell of a story in his hands that also has a caste-discrimination angle in it, it’s a very strong story and complex one indeed, Director Ratheena tries her best to elevate proceedings very simply yet making a strong impact in our minds because of the dark nature of the story with the phenomenal presentation of Mammmoty character under negative shades.

However, it’s at the climax portion the movie fizzled out, Puzhu is a slow burner, for such movies, the ending portions are very important, they only the decide the fate of the movie, The story takes an unexpected turn that feels generic, and weak.

The best part of the movie is it doesn’t underline the points of caste issues (that still persist in our country), and overcoming that, it simply makes them with very key subtle scenes, and at pre-climax, there is a shocking scene related to that, we will be hooked to our seats at that instance but the next act makes it all go in vain.

Performances wise Mammooty is brilliant, this is easily one of his finest performances, he hasn’t performed that many negative characters, but the least he did were all exceptional, and Mammooty as Kuttan continues that legacy, in many instances his performance in that grey character Kuttan like feeling stressed out, or being cold to his son or being frightened disturbs us and evokes a mysterious and little horror feel to the movie, his face/expressions at those moments were damnn good and real making you believe this man needs some psychiatrist help, at pre-climax when his character becomes dark he’ll make you speechless.
Parvathy and the rest of the cast were fine in their respective roles adding what exactly was needed with their performances.

Technical departments of Puzhu were good, Editing by Deepu joseph is neat, having just 1hr55 mins runtime is a very interesting choice for slow-burners, and music by Jakes Bejoy is superb, his bgm manages to give a spooky feel to this “Drama” movie, Cinematography by TheniEswar is fine, the color palette feels natural.

Final Word: Watch Puzhu for one breathtaking performance by Mammotty, But the unimpressive climax make’s it strictly an average Fare.