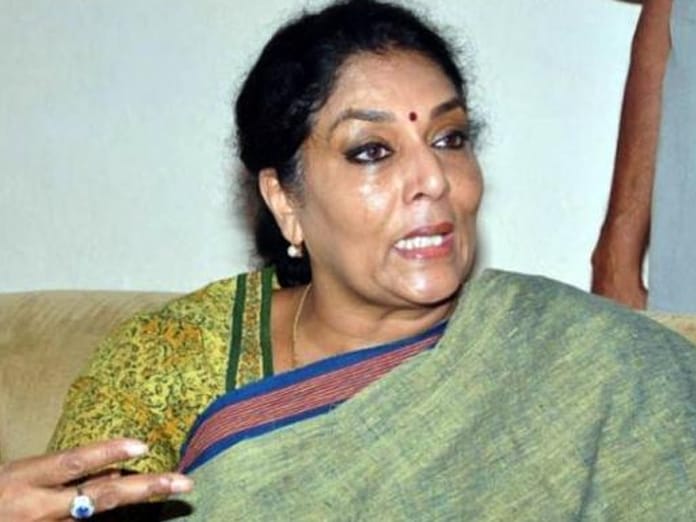 Firebrand leader and Congress MP Renuka Chowdary condemned the comments by YCP legislators against former chief minister and TDP president N. Chandrababu Naidu’s wife Bhuvaneshwari in the Assembly. She expressed anger at the outrageous remarks by YCP men against Naidu’s son Lokesh that he resembles somebody else, other than his father.

She also took exception to the Andhra Pradesh Assembly Speaker adopting Gandhi’s principles of closing eyes, ears and mouth and allowing the YCP legislators to pass comments as they liked. “Who is that fellow to question about Lokesh’ resemblance? Tell him to go and look at his face in the mirror first.”
Responding to a question about Chandrababu Naidu’s breakdown, she said politics was sucking these days. There is a feeling of contempt when I look at such people, she said, adding that she would slap that person who passed the dirty remarks in the Assembly, if she comes across him.

Renuka Chowdary lamented that since the olden days, women like Sita had been forced to prove their chastity to the men. Who are these rascals, she asked.

“They should remember that these stupids were also born to a woman. Even I can pass lewd remarks against them but their mothers and sisters would get hurt. We should be ashamed to live in a society with such low levels.”

What kind of elected representatives are these people? Before pointing fingers at other women, they should first question the spouses of their mothers, grandmothers and sisters about fidelity and chastity,” Renuka said.

The tag of an MLA or an MLC does not bring respect to any human being. These legislators are really indecent fellows. In fact, they should have been throttled to death soon as these rascals were born, she said.

She reminded that one’s native place is called ‘Matru Bhoomi’ and language as ‘Matru Basha’. These people should learn to respect every woman. Else, they are waste fellows,

In her own style and manner, Renuka said that Naidu should have taken his footwear and beaten that legislator who passed such remarks, instead of crying. Why dd he cry? Bhuvana is quite a capable woman who can give a fitting reply. Women these days are capable of being both Sitas and Surpanakas, she said.
She also said that it would be better if those persons who had made the indecent remarks die by suicide. They would at least die with the remaining respect, she said.

“These people are third-rate human beings, irrespective of caste affiliations. It is said that there is no religion and caste to terrorists. They are similar to terrorists. Even these low-level people do not belong to any caste or religion, she said. “They are distinct only as third-rate human beings. They are equal to worms in the sewerage pipes.”

In the same breath, she said she does not have any affiliation to Naidu or his wife Bhuvana. As a normal human being, I hate such low-level people, she said.

When asked why Telangana Chief Minister K. Chandrasekhar Rao responded to Assam Chief Minister’s remarks on Congress leader Rahul Gandhi but failed to raise his voice against the YCP leaders who also passed similar comments, Renuka said that KCR was an opportunist. “Now, he needs the help of the Congress. He should be sympathetic to the Congress. There is a confusion being created among the TRS cadre that the party would be merged with the Congress.”

“KCR should have condemned the remarks by the YCP leaders. Telangana and Andhra Pradesh were once a united state. He must remember that.”

She said that she would stand up and fight against injustice to women in any part of the country, irrespective of political affiliations.

Renuka said that every human being should remember that only their mother could say who his/her father is and so, should think twice before pointing fingers and making indecent remarks against other women.