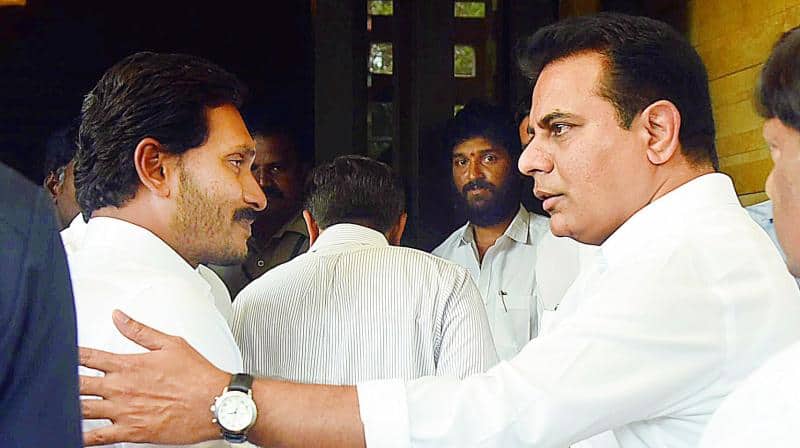 While the leaders of beleaguered state of Andhra Pradesh are busy in the mudslinging on another over raw liquor (Natu Sara) where the ruling party and opposition parties are blaming one another, neighbouring state Telangana is on development path.

Leaving the development to the last, AP leaders are throwing mud at political rivals, whereas Telangana leaders are focusing on bringing investments to the state and increase the employment and creation of wealth.

Telangana IT Minister and TRS working president has been on a seven-day tour of the United States of America with the aim of bringing huge investments to the state. A couple of days ago, a video went viral where KTR was welcomed grandly in Los Angeles by NRIs and TRS activists.

— KTR elaborated to NRIs about the ambitious Mana ooru-Mana badi program undertaken by the Telangana government. NRIs are called upon to participate in this program and the children from the state working in America were asked to act as ambassadors on behalf of the state government.

— KTR has urged members of the ITServe Alliance companies to explore investment opportunities in tier-II cities in Telangana. He addressed a group of over 250 people in San Jose (Indian American Diaspora Meet and Greet programme), assuring all help to prospective investors. IT Towers are also being set up in Warangal, Khammam, Karimnagar, Nizamabad, Siddipet, Nalgonda and Mahabubnagar. “ITServe Alliance comprises more than 1,400 member companies in the IT staffing and services sector. The total revenue of the member companies is $10 billion and they provide employment to one lakh skilled IT specialists,” KTR’s office said.

— He highlighted the measures the State government, under CM KCR, has taken to overcome power and water shortage. KTR elaborated the Growth in Dispersion policy (GRID) and also spoke on promoting IT in tier-II cities to reduce the burden on Hyderabad city.

— American multinational corporation Qualcomm will be inaugurating their second-largest campus outside the US in Hyderabad in October 2022. The global tech giant is investing Rs 3904.55 Crores to expand its Hyderabad operations over the next five years.

— At a meeting with CTO and Senior V-P of Applied Materials Om Nalamasu, KTR highlighted the industrial friendly policies of Telangana and showcased Hyderabad as the ideal destination to host the research and development expansion and component manufacturing projects of the company. Applied Materials is a leader in materials engineering solutions for semiconductors, flat panel displays and solar photovoltaic cells.

— The Med-Tech firm offers an array of Nitinol contract manufacturing services to the medical device industry. It is slated to bring high-end technology for manufacturing Nitinol products to India. The company informed KTR of their expansion plans for the next 12 months.

— Confluent Medical Technologies, an Arizona headquartered medical devices company, has announced the setting up of a pilot manufacturing facility in Hyderabad.

“Telangana is Independent India’s most successful Startup” declared Minister KTR. He explained how Telangana’s economy is growing at a rapid pace under the leadership of CM KCR. Telangana is a classic example of how equitable growth can be achieved across sectors, he added. He recalled, “In 2015, I came to the Bay Area to introduce the new state of Telangana to the world. Today, I am here to narrate the story of a Trailblazing and Triumphant Telangana”.