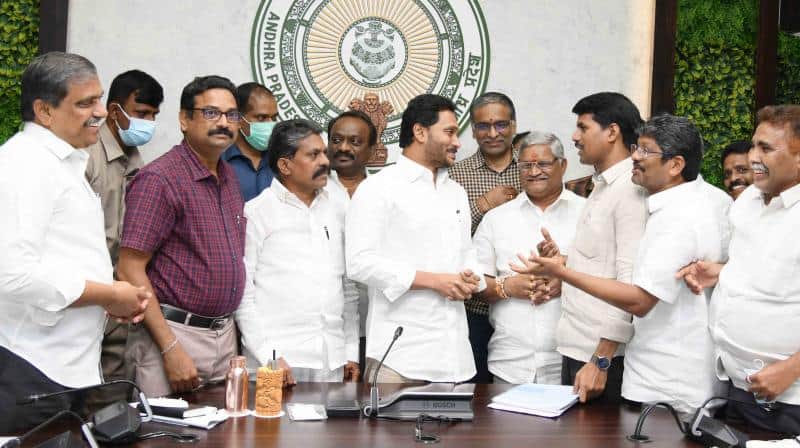 AP CM YS Jagan’s tactics on the state government employees are misfiring back-to-back. During his Paadayatra, he promised to resolve the Contributory Pension Scheme (CPS) in a week’s time after forming the government. But it’s been three years and now he has changed the tune that the CPS can’t be abolished.

During this meeting the employees unions leaders questioned why the state government is unable to abolish CPS when states like Rajasthan and Jharkhand which are in deeper crisis than AP. Hoping for a solution, representatives of employees unions have met the ministers’ committee in the secretariat. In this meeting teachers union made it clear that they would accept only OPS policy and no question of going back on it.

“We are not against the state government but it has to fulfill the promises made. When states like Rajasthan are implementing the Old Pension Scheme (OPS), why is the AP government hesitating?” questioned the employees union leaders Bandi Srinivas Rao, Bopparaju Venkateshwarlu and others.

There are 1.99 lakh employees in AP. Probation has been finalized for one lakh village and ward secretariat employees. The Ministers’ committee was formed on August 1st 2019, and the officials committee was formed on November 27th of the same year on the same issue. After the due consultations, the state government has announced that the Guaranteed Pension Scheme (GPS) will be implemented tactically.

12 percent of the employee’s basic should be invested in CGPF. The invested gains, interests and loans can be borrowed and it will be paid back at the time of retirement. Not to burden the pension class, the government is setting aside 4 percent of the amount of pensions paid in the last financial year for future needs. The total amount deposited by CPS employees and the government in National Security Deposit Limited (NSDL) is Rs 18,000 crores. The government has announced that the employees’ portion will be deposited in their PF accounts after receiving these funds. The remaining Rs 9000 crores will be kept separately for pensions. However the employees are strongly opposing this plan of the state government.