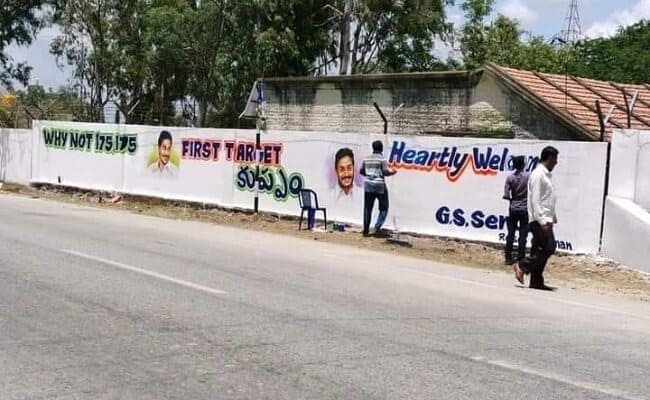 Ahead of Y.S. Jagan Mohan Reddy’s visit to Kuppam for the first time as Chief Minister, the YCP cadre decked up the town with his portraits, cut outs and banners hailing him for the priority being given to welfare of the people on the fringes of the society. Prominent among the slogans on the banners is ‘Why not 175/175?’ and ‘Frist Target Kuppam’.

Jagan is scheduled to visit Kuppam, the native constituency of his arch rival and TDP supremo N. Chandrababu Naidu, on September 23. During his visit, Jagan would launch the third tranche of YSR Cheyutha scheme and would also lay foundation stone for development works worth more than Rs 60 crore.

For the last few months, apparently the CM had been focusing on winning all the constituencies in the state during the 2024 polls. He had also been stressing that the ‘Mission 175’ should start with Kuppam which is a stronghold of the TDP and won by Naidu seven consecutive times in the last few decades.

Given the victory of the YCP in the local body elections held a few months ago, it appears as though Jagan is determined to have Kuppam constituency into the party’s kitty in the Assembly elections too, felt political observers.

Minister Peddireddy Ramachandra Reddy, along with some senior leaders, had camped in Kuppam and managed to ensure victory to the YCP with their social engineering and ‘power’ during the local bodies elections. Several TD leaders were also lured into the YCP at that time.

However, the TD leaders are of the opinion that Jagan’s visit was planned only to cover up the damage caused to the party due to the protests by Naidu during his last visit.

Sensing that Jagan is focusing on Kuppam to beat the TDP in its home turf, Naidu visited his constituency thrice in this year alone and this shows he is fearing the onslaught of the YCP, pointed out the YCP leaders.

During his last visit, the TDP and YCP men clashed with each other over the opening of the Anna canteen there.

The TDP cadre said that Naidu had already made the people in his constituency know the discrimination being shown by the YCP government in the development works during his recent visits. The YCP is dreaming to snatch Kuppam from the TDP but it can never succeed, they felt.