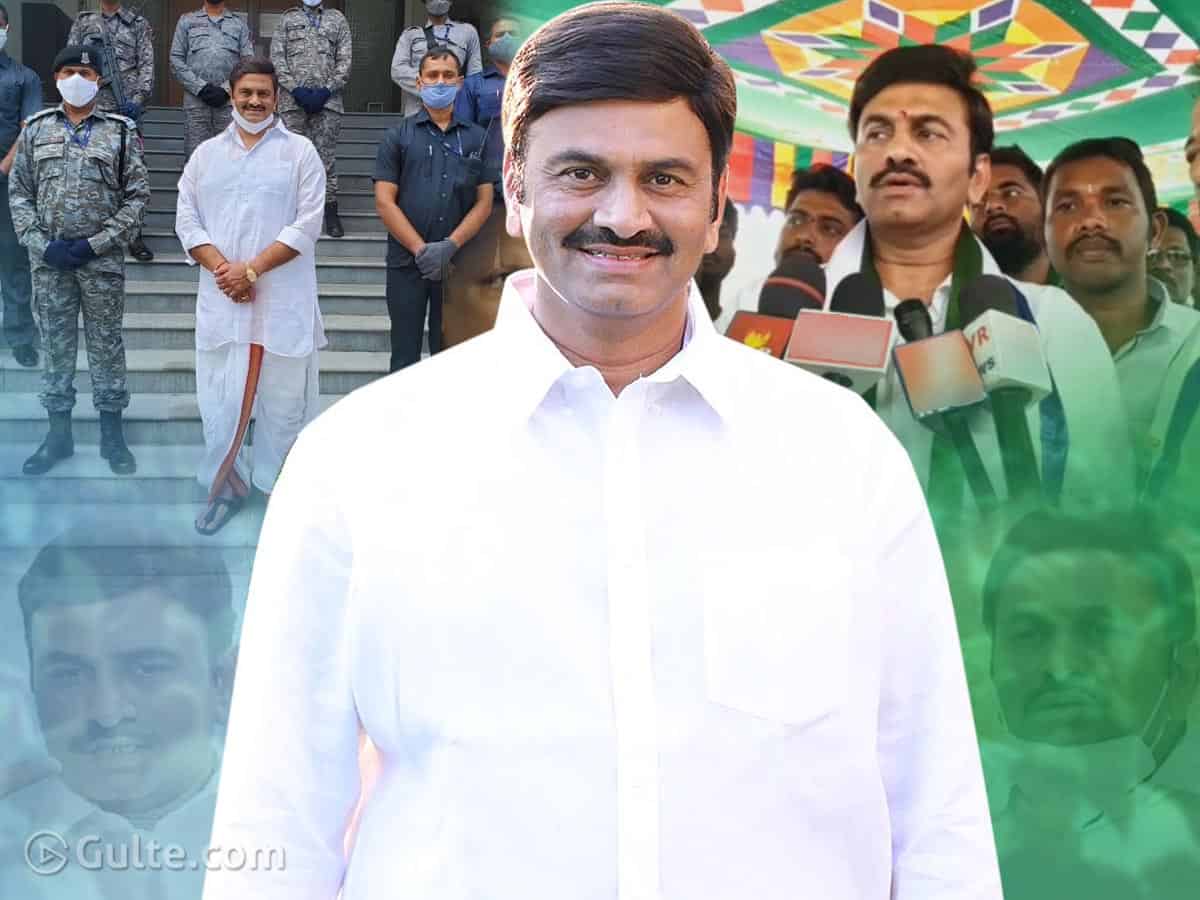 YCP MP Raghurama Krishnam Raju has become a sensational person in AP politics. The Narsapuram MP, though living in Delhi, is able to create ripples in the political circles here by blatantly ciriticising his own party, the ruling YCP, on every issue. With the Opposition party TDP’s voice becoming much weak by the day, the YCP rebel MP seems to be the real opposition in Andhra Pradesh.

The acrimony between Narsapuram MP and YCP started in November 2019 when Raju made remarks against the AP government’s proposal to introduce English as the medium of instruction in government schools. Then Chief Minister Jagan Mohan Reddy warned the MP for criticising the government. Jagan reportedly asked Y.V. Subba Reddy, the YCP in-charge of East and West Godavari districts, to give the MP an ‘English class’, according to an English daily.

At the same time, his bonhomie with Prime Minister Narendra Modi who called him by name and greeted him in the Parliament Hall has also been an eyesore for the YCP cadre. The special attention he drew from Modi has pained other YCP MPs in the scene there.

From land to sand

The YCP MP had never left any issue without criticism. He faulted the YCP leaders for resorting to corruption in housing project for the poor, for proposing to auction the TTD lands and diversion of sand to the black market. Non-availability of sand has rendered the construction labourers jobless, he criticised.

With respect to non-availability of sand, it was not just the MP who raised his voice even some MLAs too expressed dissatisfaction at the government for not being able to check its black marketing. At one instance, Raju even said that he joined the YCP only after being pleaded by the party leaders.

The YCP rebel MP claimed he was never given an audience by Chief Minister Y.S. Jagan to discuss issues and he even said that some forces were trying to maintain distance between him and their party leader Jagan Mohan Reddy. He said he was speaking to the media because Jagan was not meeting him.

With the MP’s remarks hogging the headlines daily, even his long name was cut short to RRR by the mediapersons.

The YCP, in the name of party MP Vijayasai Reddy, issued an 18-page show cause notice to RRR. In reply to this, he said that the party could had issued the notice on a different letterhead which was not of the party as it did not have Yuvajana Sramika Rythu Congress party, the actual name with which the party got registered. He insisted that YCP should use the full form of the YSRC in its official communication.

The MP replied to the show-cause saying that the notice had no legal sanctity and finding itself in a tight spot with some shortcoming pointed out by him, the YCP could not do anything to the MP.

Raju went out with all guns blazing at the party and headed to Delhi and met the Election Commission of India officials seeking clarity on the notice issued to him on YSRC letterhead.

Then, the MP said it was a war with VSR (Vijayasai Reddy) but not YSR.

At this juncture, all the YCP MPs sought disqualification of the MP from the Lok Sabha but it could not be done as RRR used carefully-worded statements that could not be deemed to be punishable. He also said that the party MPs were simply wasting public money by hiring a chartered flight to Delhi to seek Raju’s disqualification.

When the disqualification move could not take shape, the best YCP could do was change his seat to back benches in the Parliament but even this did not deter RRR.

Moreover, Raju had sought appointments of the Union ministers like Amit Shah and Lok Sabha Speaker Om Birla and spoken to them even when the YCP government has imposed restrictions on its MPs and told them not to meet Modi and Shah directly, without taking prior permission of the party MP Vijayasai Reddy, who is a close confidante of Jagan Mohan Reddy.

The breaking point came when the topic of caste-based politics within YSRCP was highlighted by the MP. He said that the YCP government was giving a majority of the plum posts to Reddys due to caste feeling. He said that there was ‘Reddyism’ in YCP rule.

He continued taking potshots at the YCP government’s moves and policies. He also alleged that religious conversions were rampant in AP and that people were being influenced by the power and money of Christian missionaries.

When TDP legislature party leader and former minister K. Atchannaidu was arrested for his alleged involvement in the Rs 150-crore ESI scam, with the sleuths scaling the walls of the former minister’s residence, RRR said such acts would bring disrepute to the YCP government. He also said that due procedure was not followed in the procedure to arrest the former minister and the arrest was a deliberate act of political vendetta.

Learning that his criticism was becoming popular among the masses with some catchy phrases, punchy dialogues from movies like “Pandule gumpuluga vastayi, simham okati gane vastundi”, the MP began doing more homework before addressing media conferences and also appearing on TV news channels in various prime shows and debates.

RRR fumed at his own party leadership and said there were many irregularities in the ‘Pedalandriki Illu’ scheme. He faulted the YCP government for trying to take away lands from one section of the poor and giving it to the other economically weaker section. In the meanwhile, some people are taking commissions, he said.

After RRR spoke of this, the Amaravati farmers performed Palabhishekam to his portrait for supporting their cause.

After that, he fumed at stalkers who were making calls to him and said “Ye Reddys be careful. You will be shot dead by my gunmen.”

RRR also alleged that his phones were being tapped when the Opposition leader N. Chandrababu Naidu also levelled allegations about the same.

Just a couple of days ago, reacting to minister Kodali Nani’s comments that he suggested to the CM to think about Amaravati once again as it could not be the legislative capital because there was no space for the poor in the people’s capital, RRR said that it was not Kodali’s statement but that the CM was making his actual ideas and plans public over Amaravati through the minister’s voice.

In AP, where the Opposition’s stature and voice has been reduced to a mere token with no real value at all, leaders like RRR, who are vociferous, are true saviours of democracy.