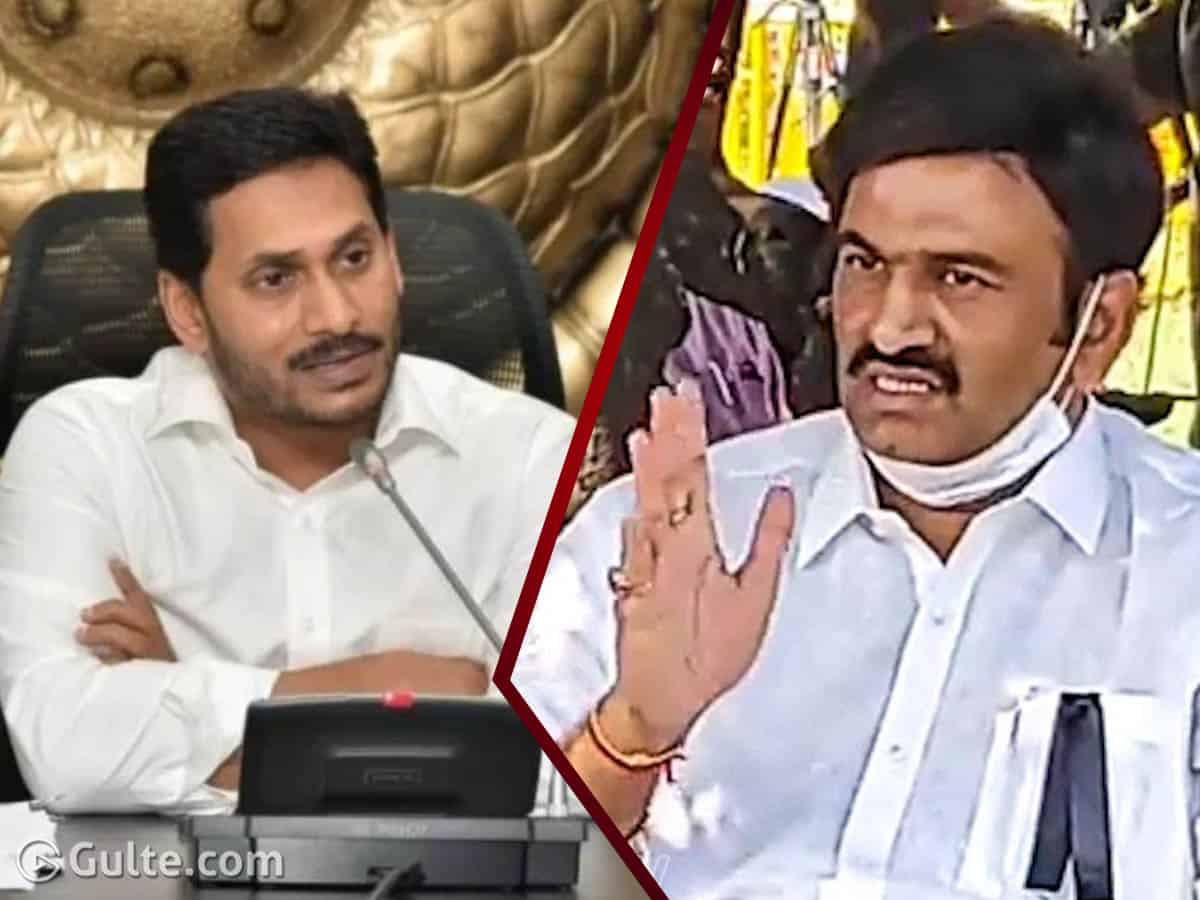 Narsapuram YCP rebel MP Kanumuri Raghurama Krishnam Raju, yet again, launched a vitriolic attack against the YCP government and AP Chief Minister Y.S. Jagan Mohan Reddy. In what can be termed the harshest remarks, the MP said that he always thought that the Chief Minister was “Magaadu”, “Monagadu” and “dhairyavantudu” but that his cheap tactics of foisting cases against dissidents were proving him otherwise. “I had a high opinion about the CM sir (thought that he is a “magaadu”) so far, but now, I feel it is a mistake.”

“If there is any animosity between us, we should discuss it face-to-face but I did not expect that the CM would degrade himself to such cheap politics wherein a third person is provoked to file cases against me.”

He said that he was the first person who always wished prosperity to the CM. “Unfortunately, he himself is diminishing his stature,” he lamented. The MP said that he always loves the CM and that Jagan Mohan Reddy should realise it.

RRR said that the same person who threatened to kill him had filed a case against him at the behest of the YCP top leaders. “Filing of cases against me will only elevate my stature but your (Jagan Mohan Reddy) reputation will suffer a beating,” he said.

“You yourself are tarnishing your image. Please do not do degrade yourself,” he said, pointing to the Chief Minister.

The MP explained that he was trying to convey his agony to the CM through the media because he had no opportunity to directly meet the CM and express his concern. “You (Jagan) had already conveyed it to me that I had lost the eligibility to speak to you directly through your confidante in the Parliament,” he said, indirectly hinting at YCP MP V. Vijayasai Reddy.

“You (Jagan) had used the “brahmastra” upon me by trying to pin me down through cases but I feel your level is something more than what you think,” RRR said.

Upping the ante on the Capital row, he suggested that the YCP government should rethink and review about its decision on shifting the capital from Amaravati as it was being opposed tooth and nail both by the people and the people’s representatives. “Our party is not against Amaravati and during our election campaigns, we made that clear to the public.”

He continued: “Courts have been admonishing the YCP government time and again on every issue so much so that it has become a regular feature in AP but in the case of Amaravati, please reconsider the decision and do justice to the farmers.” The MP also suggested that the YCP government should try to collect the public opinion on Amaravati.

RRR also faulted Kodali Nani for making derogatory remarks against Hindus and Hindu Gods which could hurt the sentiments of the devotees. Reminding that Venkateswara Rao (aka Kodali Nani ) said “Cheyyi virigite emavutundi, kaalu virigite emavutundi” when Lord Hanuman’s statue was desecrated at Eleswaram mandal in Prathipadu constituency. The MP alleged that Nani was making such hurting remarks at the behest of the YCP leadership.

In view of the increasing attacks on Hindu temples and priests and desecration of statutes, RRR said that he launched Sanatana Swadesi Sena which would protect the Sanatana Dharma of Hindus. He said that the organisation had been registered and that it has no affiliation to any political party.

In the coming days, Swadesi Sainiks will raise their voice whenever their sentiments are hurt in any village or mandal or any place in the state, RRR added.