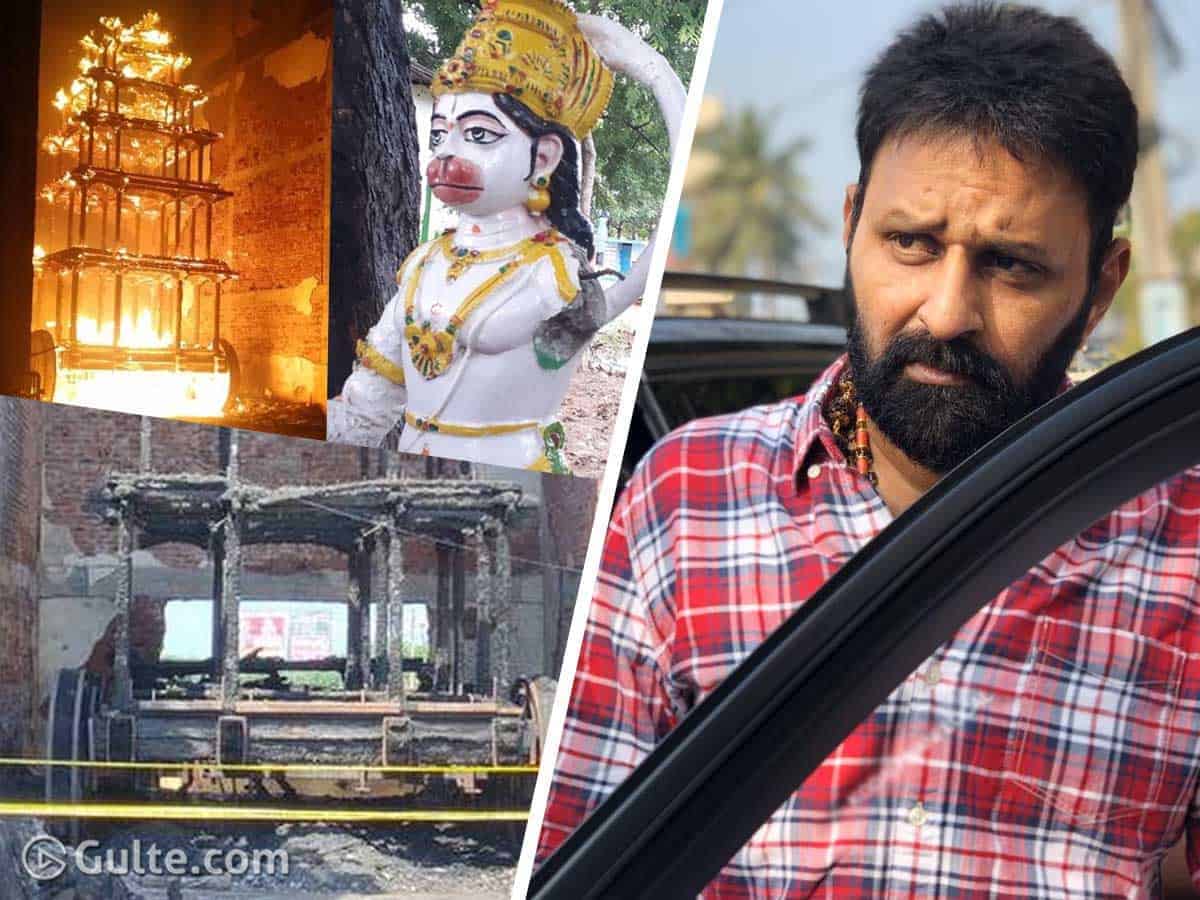 Minister for civil supplies and consumer affairs Kodali Nani’s suggestion that the tradition of signing a declaration at the TTD temple, when people of other religions have special darshan, should be done away with henceforth, sparked severe backlash from the public and elected representatives. Nani’s statements have created a furore both in the political circles and among the public.

Now, he seems to be in the red zone with the public too joining the political parties in criticising the minister and by all chances, he is likely to face the wrath of the public.

Nani is known for his abusive remarks and at times, even filthy remarks over YCP’s bête noire and TDP president N. Chandrababu Naidu, his son N. Lokesh Babu. As long as it was political rivalry, people bore with it despite his unsavoury language and remarks. Some anti-TDP activists could have enjoyed it too.

But now, his derogatory remarks over the temples and idols can result in a bad image of himself.

For the BJP, which is vying for power in the fledgling state, Andhra Pradesh, Nani seems to have given a weapon by making such anti-Hindu remarks. The part took serious exception to the minister’s derogatory language against temples and idols.

Nani also took light of the series of the suspicious attacks on the temples, which the Hindu devotees allege to be a conspiracy by the YCP government as Chief Minister Y.S. Jagan Mohan Reddy is a Christian.

The minister wondered why was the declaration issue being raked up only when Jagan Mohan Reddy went to the Tirumala temple and why was it not mentioned when
N. Chandrababu Naidu or Y.S. Rajasekhara Reddy visited the shrine in the position of Chief Minister. He said that the tradition of declaration was introduced by the political parties and that it was meant to serve no real purpose.

Nani also reminded that the same Y.S. Jagan Mohan Reddy visited the shrine when he was in the Opposition, before launching his padayatra, but there was no such restriction at that time too. “Now, when the TTD Board had invited Jagan to offer silk clothes to the Lord being the head of the state, why should he give a declaration?”

“The TTD Board is not asking for the declaration. It is Mr Naidu and a couple of BJP leaders who are insisting that the declaration should be given,” he said.

In the same breath, Nani questioned why was this declaration a big issue only with the Tirumala temple. “I went to several churches, mosques but was not asked for any declaration. Neither does the Srisailam temple nor Durga temple in Vijayawada have such a tradition. Why is it that a declaration is being asked only for Lord Venkateswara temple in Tirumala,” he asked and also suggested that the issue be discussed thoroughly in the presence of religious heads.

Further, he said that the tradition of declaration was introduced only by human beings and so it can be withdrawn. When the tradition was introduced some decades ago, why is it that strict implementation of the rule being insisted only when Jagan Mohan Reddy is visiting the temple, he asked. “All these years, the declaration was not taken cognizance of and people of other religions and beliefs also visited the shrine,” he pointed out.

“If the arm of a statue of Lord Hanuman beside a street is broken, will the statue stand to lose anything? Similarly, if silver statues worth Rs 6 lakh are stolen from Durga temple, will someone build mills or palatial buildings with it and by burning a wooden chariot worth Rs 1 crore, who is going to benefit or will the Lord Lakshmi Narasimha Swamy lose something,” he questioned.

He fumed at the BJP, TDP and Jana Sena parties for trying to project themselves as the champions of Hinduism by resorting to cheap tactics. If one party demolishes one temple, the other is trying to desecrate an idol and doing what they wish to gain the brownie points over the other. “Kandakavaram tho vallu kovvekki pravartistunnaru,” he said.

The minister said that the government has evidence to prove that it was the constituency in-charges of the TDP who were involved in the temple desecration spree.

The BJP took serious exception to the derogatory language used by the minister against gods. Party AP unit president Somu Veerraju demanded that the minister withdraw his remarks. He said that they would also submit a representation to Lord Hanuman and ask him to make Nani know of his mistakes.

Veerraju said he was against using of abusive language against not just gods but even individuals and other leaders in any legislative House. “Some political leaders are encouraging their leaders to abuse their rivals as some people are enjoying it. They should remember that political leaders have been elected not to entertain people but to fulfil the promises made during the hustings,” he said and added that the BJP was planning to bring a law which would insist that respectable language should be used in the legislative houses and that the members should also conduct themselves properly.

Meanwhile, the social media is abuzz with questions on how could Nani take desecration of temples light while he made a ruckus when a statue of former CM late Y.S. Rajasekhara Reddy was demolished as it was obstructing the way on a main road.

At the same time, Hindu devotees fumed at Nani and suggested that when the government does not have any respect for the temples and God, they can just dissolve the endowments department and remove hundis from all the temples by telling the devotees not to make any offerings. “Is the money being enjoyed by the gods or would gods loiter in the temple lands,” they asked.