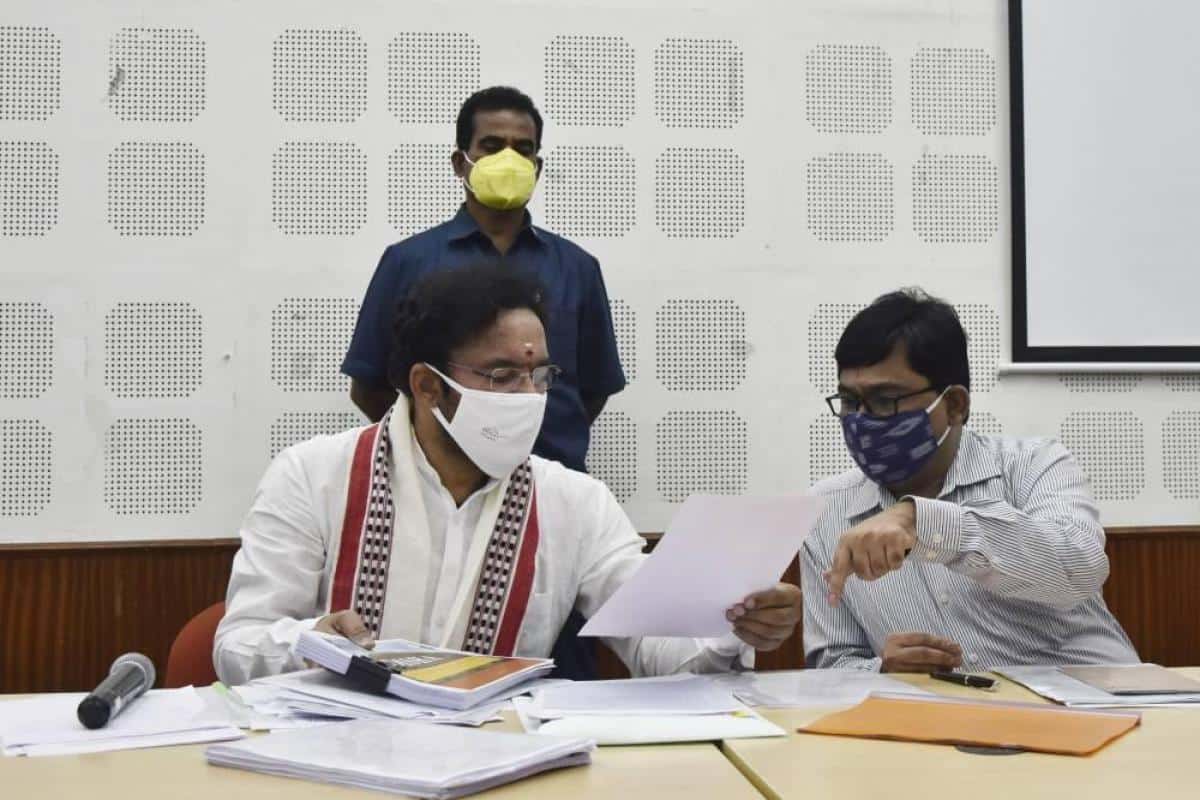 Union minister Kishan Reddy condemned Telangana IT minister K.T. Rama Rao’s remarks that Prime Minister Narendra Modi was showing discrimination against Telangana. He said that the Telangana government had not sent comprehensive report on the loss caused by flash floods to the central government but blaming the Centre for not releasing the funds.

Kishan Reddy addressed a meeting held by the BJP leaders at Tadbund Sikh village in Secunderabad on Sunday. Speaking on the occasion, Kishan Reddy asked KTR to reveal the number of double bedroom houses given to the poor. The BJP leader alleged that KTR’s supporters were pocketing the Rs 10,000 financial aid announced for each flood-hit family. “Speaking lies has become a habit for KTR,” Kishan Reddy said. Can KTR show me one road in Hyderabad without potholes, he asked and reminded that the Centre had given Rs 202 crore for laying roads in the state.

In the same breath, Kishan Reddy said that the credit for bringing the sea into Hyderabad goes to KCR. It is because of the negligence of KCR that thousands of houses were submerged in floodwaters, he pointed out. The BJP leader said that the state government was a failure in checking floods in Hyderabad and he also faulted KCR for failing to visit the flood-hit in the city.

The Centre sent Rs 224 crore as immediate relief towards disaster management to the Telangana government, he said and faulted the officials for failing to focus on providing adequate relief. The government is more interested in elections but not people’s welfare, he said and added that it had not sent the comprehensive report on the loss caused due to flash floods. “The TRS has not sent the flood report only to blame the BJP government,” he alleged.

Kishan Reddy asked KTR to submit details of how Rs 67 crore sanctioned by the Centre for the development of Hyderabad were spent. He predicted that the people would drive away the father-son duo from the state in the next elections.

BJP state president Bandi Sanjay said that KTR and KCR’s nephew Santosh Rao were fighting among themselves for the Chief Minister post. He alleged that the state government was diverting the Cantonment funds. All the funds coming from Cantonment are from the Centre, he said.

Sanjay said that he was ready to discuss with KCR about the funds released by the Centre to Telangana. He also said that KCR’s Cabinet had alcoholics and cheaters. The BJP leader said that the TRS was expressing confidence of winning the Dubbak bypolls outside but fearing defeat inside. In 2023, the BJP will come to power in Telangana, he predicted.

Sanjay also criticised KCR for entering into an alliance with MIM which had desecrated Hindu gods. KCR cheated the Muslims promising 12 per cent reservation for them, he said and added that time was ripe for another movement against KCR in Telangana.

BJP leader Motkupalli said that the BJP would register victory in Dubbak. In the next general elections too, BJP would be voted to power. KCR is a blind ruler who cannot see the trouble of common man, he said.

The CM’s residence is not Pragathi Bhavan but an abode of sins. In the Rs 10,000 financial aid announced by the TRS government for flood-hit families, Rs 5,000 is being pocketed by the TRS activists and the remaining being given to the flood victims, Motkupalli alleged.

“In KCR’s rule, Telangana has turned into Burada Telangana but not Bangaru Telangana as envisioned by the TRS. It is just KCR’s family that had become Bangaru (wealthy) in the TRS rule,” he said and alleged that KCR’s family was encroaching lands in Hyderabad.