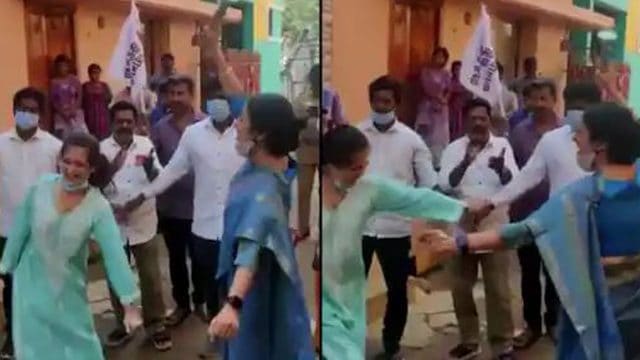 The Election campaign in Tamil Nadu has been hogging all the limelight. Kamal Haasan’s Makkal Needhi Maiam party is leaving no stone unturned to grab the voters attention. Kamal’s younger daughter Akshara Haasan and Kamal’s niece Suhasini have been aggressively campaigning for Kamal’s party and drawing the attention of voters.

As the election in Tamil Nadu is scheduled to take place on April 6th and the campaign is in its final stage, the political parties have upped their campaigns. Taking their aggressive campaign to the next level, Akshara and Suhasini were spotted dancing and doing theen maar barat dance. Their campaign is certainly boosting the confidence of party leaders and activists.

The MNM party is contesting in 154 Assembly seats out of the total 234 Assembly seats and left the balance seats for its alliance parties. AISMK (All India Samathuva Makkal Katchi) and Indhiya Jananayaga Katchi (IJK), the allies of MNM, will contest on 40 Assembly seats each.

Earlier, Kamal’s party had contested the 2019 Lok Sabha general election. The party had secured 4 percent votes. It got about 10 percent votes in the urban areas.