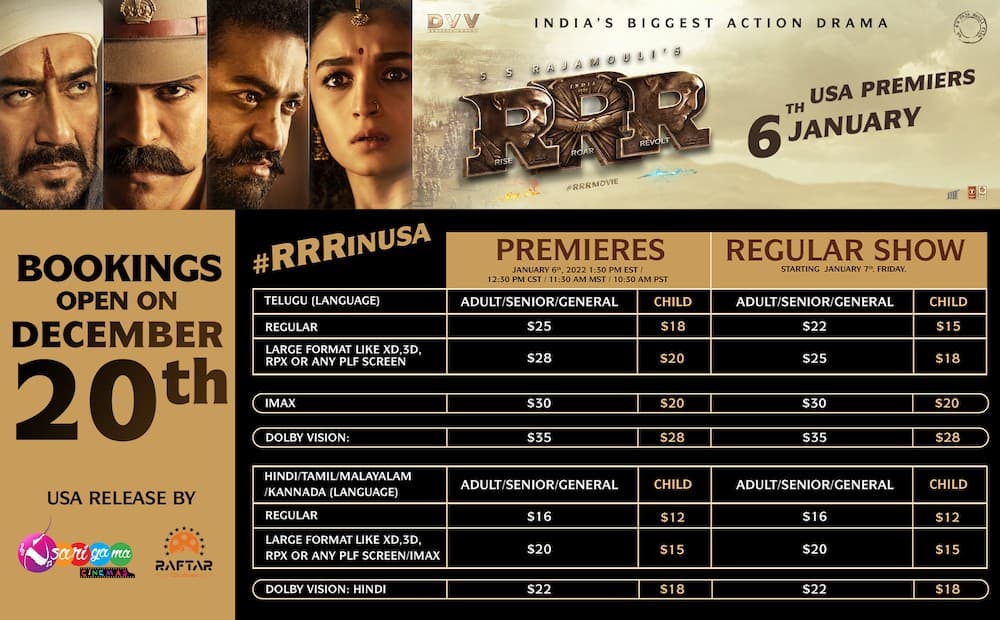 RRR will be available in all premium large formats (Dolby Vision, IMAX, 3D, XD and RPX). It is also the first Indian film which to be screened in Dolby vision cinemas in the USA, releasing in 100 Dolby Cinemas thus assuring better visual quality (33% more than IMAX format) and better sound quality (5 times the audio channels of IMAX format).The grand theatrical viewing experience of RRR is best enhanced when in this big format.

Despite being the costliest film ever made in India, our goal is to price the tickets reasonably so that all audiences will be able to watch RRR at affordable prices.

Premieres in all languages

The culture of movie premieres is not prevalent for Hindi films. To match the hype and expectations that RRR has created across the globe, there will be premieres of RRR in all languages in the USA on 6 January 2022.

RRR has created a never-before buzz among movie lovers and we will match the craze by releasing in over 999+ theaters across the USA in all major theater chains and in all major formats. Our aim is to have RRR screening in every theater within 20 miles radius of your homes. In the case that there is no screen available nearby, please contact us via mail and we will try our best to accommodate your request.