‘What Is She Doing On Field?’ Anushka Gets Trolled 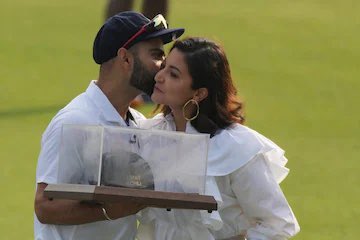 Indian skipper Virat Kohli completed his 100th test match appearance and the cricketer was felicitated by Rahul Dravid. The test match which is currently underway at Mohali in Punjab saw Virat Kohli being given the ceremonial cap by Dravid.

However, fans on Twitter were divided by Anushka’s presence with few questioning the logic behind it. Several netizens asked if it was a family event as no cricket wife had earlier made such a move. On the other hand, Kohli said “It is a special moment for me. My wife is here and so is my brother. Everyone is very proud. It is indeed a team game and it couldn’t have been possible without you. Thanks to the BCCI as well. In present-day cricket, with the amount we play with three formats and an IPL, the one takeaway the next generation can take from me is that I played 100 games in the purest format”.

Sourav Ganguly also wished Virat Kohli. In a video message, he said, “It’s a huge landmark in Indian cricket, playing 100 Test matches is something that you dream of when you start playing cricket for your country. It’s a great moment for Virat, it’s momentous for Indian cricket.”