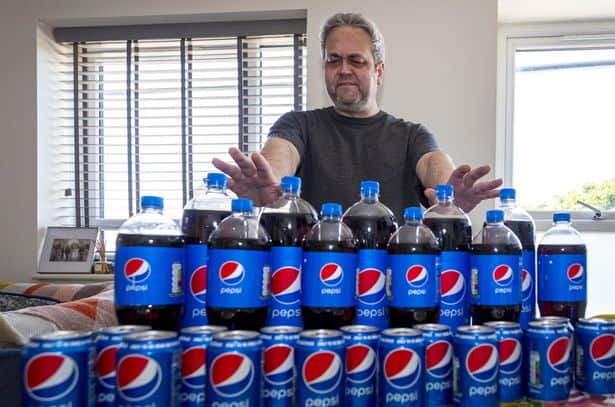 Who doesn’t love soda?! Soft drinks typically have two components that can be addictive depending on your body chemistry – Sugars and caffeine. It is no secret that sugar and caffeine give a quick jolt of energy, besides some people get addicted to carbonation, which has a slight cooling effect on the metabolism.

In a similar vein, a supermarket worker, from the United Kingdom, went on to drink Pepsi for a whopping 20 years every day. The reports suggest that the man, Andy Curie (41) drank water for the first time recently after 20 years of surviving on the beverage.

Coming into detail, Curie drank up to 10 litres of soft drink every day for 20 years straight. However, he claimed to have beaten this habit after being hypnotised. Shockingly, the man used to drink up to 30 cans daily, costing him £20 per day. This makes a total of £7,000 a year (more than Rs1.9 million).

As we discussed earlier, Curie said that he got addicted to drinking soft drinks when he was in his 20s. “I work nights so I always liked the sugar rush to keep me going. I’d go through four or five two-litre bottles of Pepsi every day,” said Currie. “Because I work at Tesco I could just buy it straight after work and take it home.”

Thankfully, Currie decided to end his weird and unhealthy habit when the doctors told him that he could get diabetes. For the same, he saw a hypnotist, who identified him as having an avoidant restrictive food intake disorder. This piece of news is an eye-opener to many out there who love gulping Pepsi, Coke, Mountain Dew, etc on a daily basis.

It is certain that losing a bad habit comes with certain withdrawal symptoms. Sugar and salt are also known to “turn on” the same pathways in your brain that addictive drugs do. And more soda… It’s the evil triad!