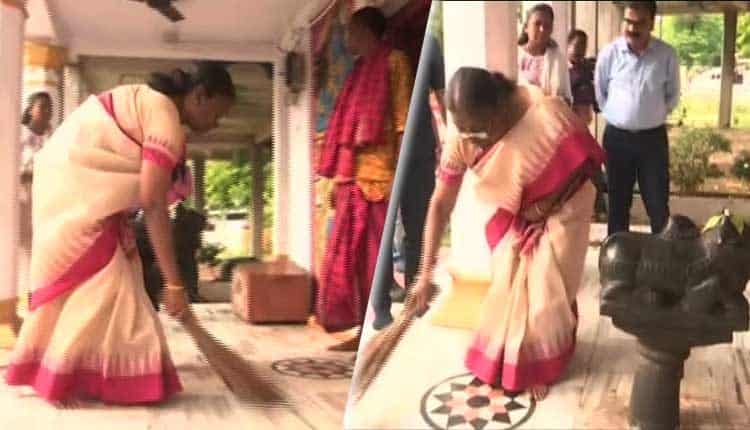 Ever since the Bharatiya Janata Party announced Droupadi Murmu’s name as the NDA’s Presidential candidate, the public went euphoric and praised the NDA’s choice of choosing ‘the voice of Tribal’. India has a large tribal belt and the people are confident that tribal lands will be safe and secure under Droupadi Murmu as the President of India.

Meanwhile, the first tribal President and the former Jharkhand Governor visited multiple temples in Rairangpur area of her hometown Mayurbhanj district in Odisha to offer prayers ahead of her departure to Delhi. And pictures on the internet show the 64-year-old Murmu visiting the temples of Lord Jagannath, Hanuman and Shiva in Rairangpur.

It is also the place from where she was first elected as an MLA in 2000. People are awestruck to see Murmu sweeping the premises of the Purandeswari Shiva temple before offering prayers. She is headed to Delhi via Bhubaneswar to file her nominations on Saturday. Parallel to that, Murmu was given a grand welcome at the Brahma Kumaris of Rairangpur.

Murmu has been provided Z plus security by the Union home ministry. Apart from her vividly seen simplicity and nobleness, there comes a light of hope over an inspired choice made thus making her an ideal candidate for the office of the President of India. Droupadi Murmu, once elected, will not only be the first tribal President of India and the first leader from the east to hold the highest office but will also be the first President of India to be born after independence.