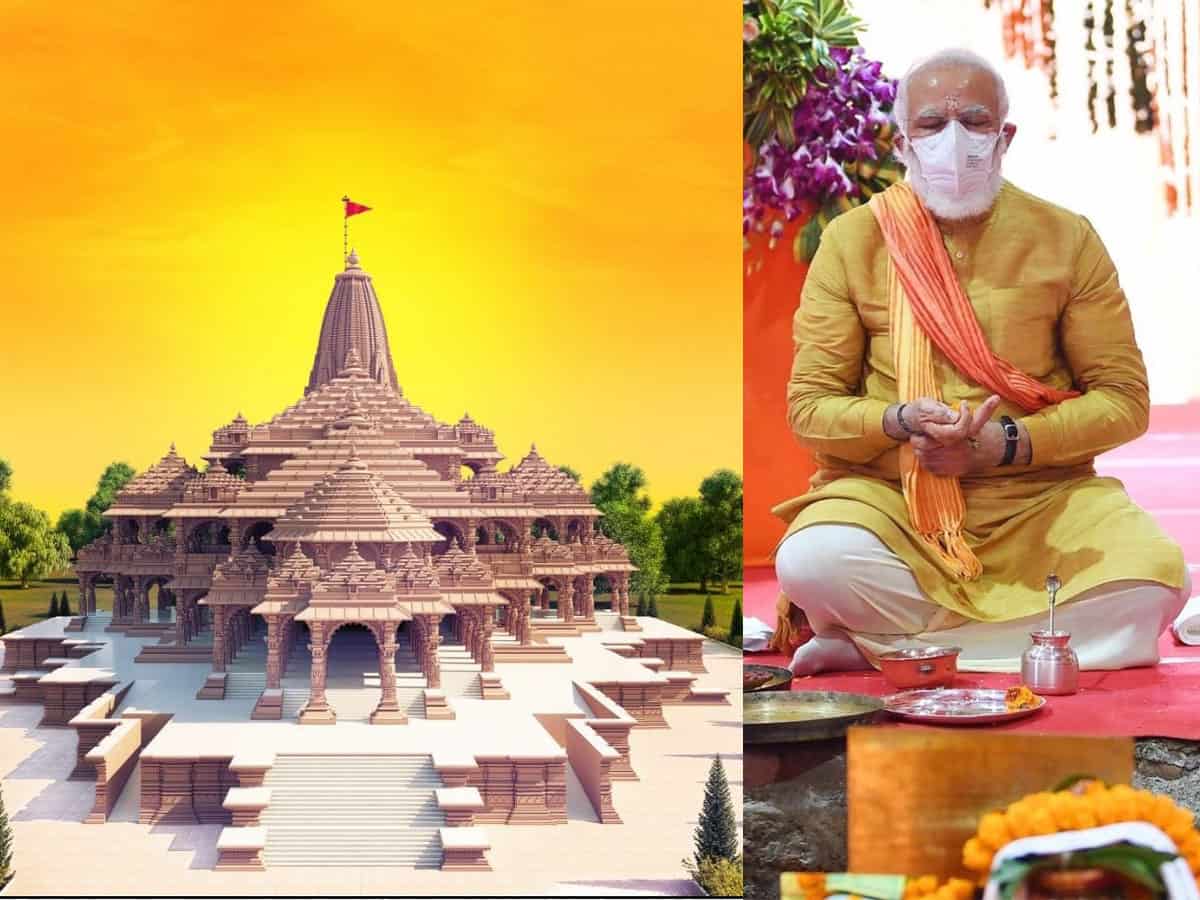 Months after the Supreme Court verdict ordered for the construction of Ram Mandir at the once disputed site of Babri Masjid in Ayodhya, Prime Minister Narendra Modi on Wednesday participated in the Bhoomi Pujan to mark the beginning of construction of a grandiose Ram temple there. The programme was held in compliance with the Covid-19 protocols.

Modi urged the people to chant ‘Jai Siya Ram’ which should echo not just in the birthplace of Lord Ram but across the world. The temple in Ayodhya had been a long-cherished dream of the Bharatiya Janata Party (BJP). Modi has called the Ram temple construction as dawn of a new era, saying centuries of wait has finally ended.

Accordingly, it was held in a grand manner and PM Modi laid a 40-kg silver brick, donated by Mahant Nritya Gopal Das, to conclude the groundbreaking ceremony. However, the brick will be removed after the ceremony and kept safely in a locker. RSS chief Mohan Bhagwat and 170 other guests attended the ‘bhumi pujan’.

Achieving court orders for the construction of Ram Mandir at the 2.77 acre disputed site in Ayodhya, Uttar Pradesh, had been a long legal battle. A mosque, Babri Masjid, existing in the site was destroyed during a political rally which turned violent on December 6, 1992.

Subsequently, a land title case was lodged in the Allahabad High Court which pronounced its verdict on September 30, 2010. The judgement said that the total land be divided into three parts, one –third to be taken by Ram Lalla Virajman represented by Hindu Maha Sabha, other piece of land going to the Sunni Waqf Board and the remaining to be under the control of Nirmohi Akhara, a Hindu religious denomination.

Displeased with the decision, all the three litigant parties moved the Supreme Court challenging the decision of the Allahabad HC.

At this juncture, a view into the past makes one appreciate Modi for handling the issue efficiently. The PM, assisted by Union Home Minister Amit Shah, took all measures to prevent a repetition of communal riots, that led to the demolition of Babri Masjid, on the day when the Supreme Court delivered verdict regarding the same case. Additional forces were deployed in Ayodhya ahead of the judgement.

In a landmark judgement delivered in November, 2019, the apex court upheld the title rights of Ram Lalla Virajman over the disputed property and ordered the Centre to develop a trust to oversee the construction of Ram Mandir within three months from its ruling. It also said that there were no remains of an Islamic structure below the debris of the Babri Masjid demolished.

Similarly, even this morning, the ‘bhumi pujan’ at Ayodhya passed off peacefully with the temple town being turned into a virtual fortress as VVIPs attended the grand function.

Meanwhile, there is criticism against the Modi-led BJP that the district administration of Uttar Pradesh mounted pressure on people in Ayodhya to restrain from speaking against the Ayodhya verdict.

After the SC delivered its verdict, a number of prominent personalities asked for its review as it has “caused widespread concern among all those who have the interests of justice and fairness at heart”.

They said that the court has delivered a judgment “which has been made possible only by the criminal destruction of the Babri Masjid”, which the court itself described as an “unlawful act”. They said that the archaeological evidence about which the court was speaking and based on which the verdict was delivered could not have been possible without the destruction of the masjid. “Nor would it have been as easy for the Court to hand over the site to the Hindu side if the Masjid had still stood,” they said.

Some others also said that the judgement was delivered in favour of the Hindus ‘under the influence of the ruling party leaders’.