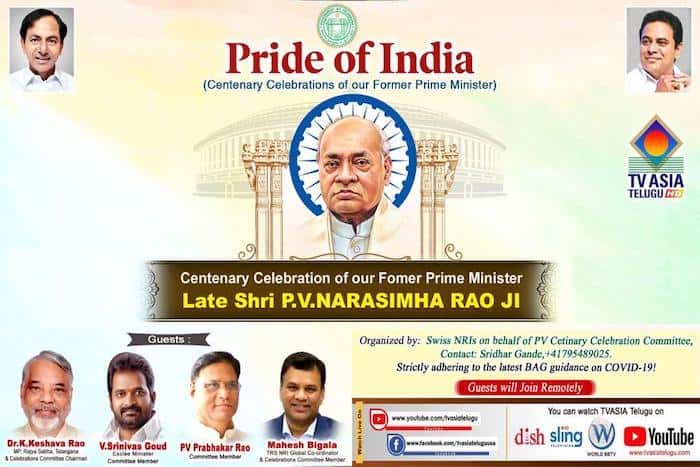 Resolution was introduced by Mahesh Bigala for Bharat Ratna and the resolutions been supported by all PV Committee members as well as the NRI forum.

Cheif Guest Keshav Rao said that former Prime Minister PV Narasimha Rao was a constant reformer. He said it was PV style to undertake reforms given by any ministry. Gurukul Vidyalayas as the Minister of Education, the policy of health workers as the Minister of Health, the Chief Minister is credited with introducing land reforms in the country. He reminded that 95 per cent of small farms in Telangana are due to land reforms undertaken by PV. He said the humanitarian dimension was never ignored in any reform.

Another guest Prabhakar Rao said PV was inspired by multifaceted talent. His son PV Prabhakar Rao, a member of the Centenary Celebration Committee, said that it was a true tribute to PV, even if he was accustomed to one thing. He said that Switzerland was very important in the Indian economy. PV was the first Indian Prime Minister to attend the World Economic Forum in Davos. Attending the Davos conference, he spoke at length on the conditions and opportunities for investment in India.

Mahesh Bigala, TRS NRI coordinator and member of the PV Centenary Celebration Committee, said the PV centenary celebrations would be held throughout the year. He also said that the centenary is celebrated in 50 different countries according to the instructions of Chief Minister K Chandrashekhar Rao and PVNR Committee. We have decided to install statues of Narasimha Rao in the USA, the United Kingdom, South Africa, Australia, New Zealand, Singapore, Malaysia and Mauritius.

He was of the view that the awarding of the Bharat Ratna to PV was a fitting honor and also quoted Municipal Administration and Urban Development minister KT Rama Rao has called upon the Non Resident Indians of Telugu origin to celebrate the birth centenary celebrations of former Prime Minister PV Narasimha Rao on a big scale in all the countries.

NRI’s from Swiss Sridhar Gade said to this day, when it comes to economic reforms, the first name that comes to mind is PV. He praised the minority government for leading with a firm will. Pawan Dudhilla, a spokesman for the Swiss NRI Association, said PV was a multilingual but moderate speaker. Speaking less .. he said his words were like pearls.