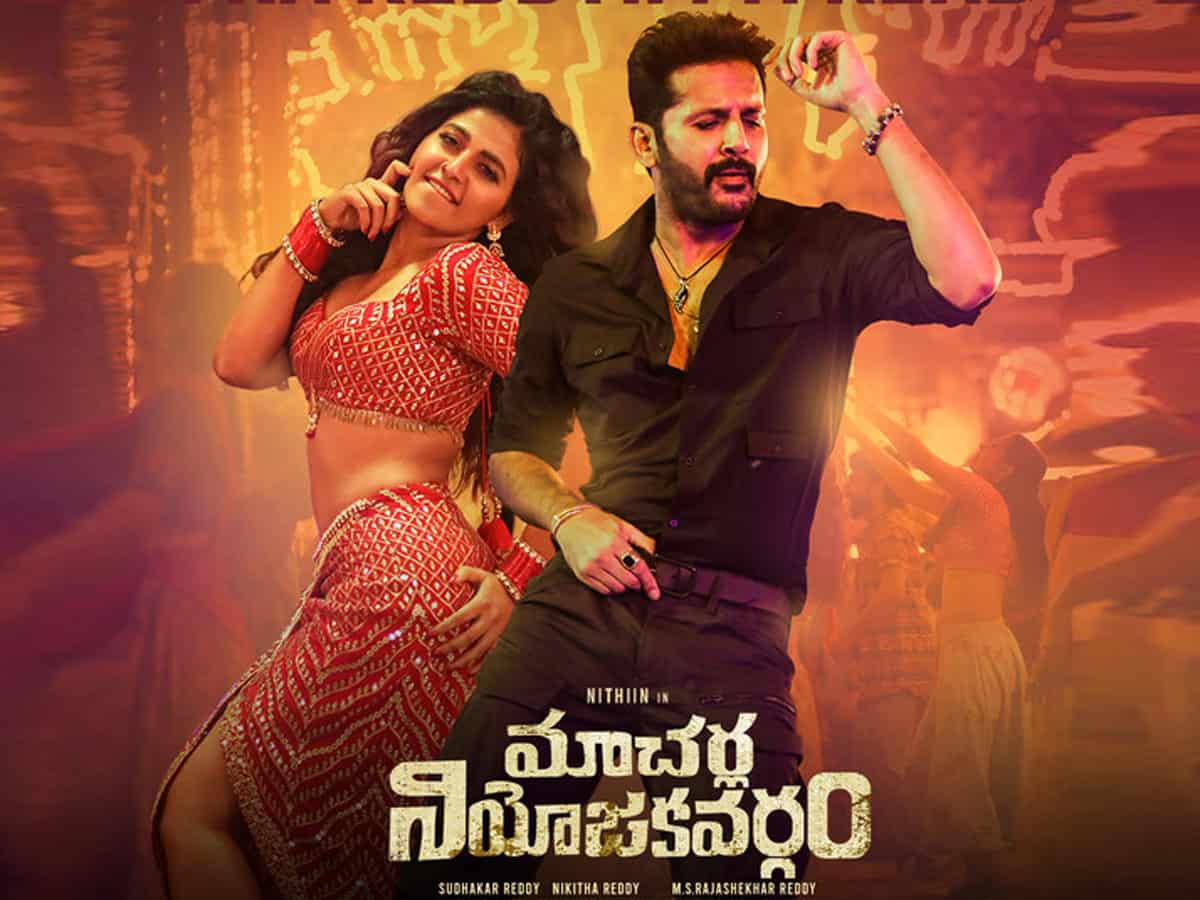 Nithiin had been doing class and loverboy roles for a long time. The actor has gone for a change this time with Macherla Niyojakavargam and appeared in a mass action role. The trailer hinted at the same. The movie was released today. Here is the review.

Rajappa (Samuthirakani) is a ruthless politician who wins the election for many terms unanimously in the Macherla constituency. Siddharth Reddy IAS (Nithiin) travels to Macherla to find his girlfriend Swathi (Krithi Shetty) and learns that she is in trouble due to Rajappa (Samuthirakani). At the same time, he gets posted to the Guntur district as the collector. How Siddhu confronts Rajappa and bends him for elections is all about Macherla Niyojakavargam.

After earning credibility with his films in the recent past, Nithiin’s decision to sign in for Macherla Niyojakavargam is sure regrettable. His role in the movie appears very artificial. The bad writing and narrative don’t give a chance to Nithiin to make the movie any better.

Krithi Shetty’s role is just a link between Nithiin and the villain. Krithi Shetty hardly gets a dialogue in the second half and she appears only during a song. She is confined to a limited role and she is just alright in it.

All other actors including Catherine Tresa, Murli Sharma, Rajendra Prasad, and Indraja are typecasted. Samuthirakani also appears in a monotonous role as a villain and intense could not be felt anywhere.

The so-called entertainment is catered by Vennela Kishore. He struggles to make the audience laugh with his cringe comedy, but it ends up as an irritating one that crawls to the serious parts of the movie too.

Macherla Niyojakavargam has absolutely no new story. The very ordinary story that has been watched umpteen times is brought back as a battle between a district collector and a cutthroat politician.

The dialogues are dull and the narrative is mediocre. The conventional story-telling leaves the screenplay as expected. Cinematography is ordinary.

Songs and BGM by Mahati Swara Sagar failed to make wonders as it did with Nithiin’s Bheeshma.

There is a trend in the Telugu film industry that similar types of stories come as a bunch until one of them hits the rock bottom. After the spy series, cop movies, and the lawyer trend, here comes the collector trend. Probably Nithiin is the last one in the line to take up the district collector roles after Nani and Raviteja. Unfortunately, this collector also is very disappointing.

Macherla Niyojakavargam is yet another hero-villain challenge template movie that ends with the hero’s upper hand. When the core concept is repeated, it depends on the director’s vision to change the fate with much-needed freshness in it. Macherla’s director did not deviate an inch from the formula-based action movie. He strictly followed the order of a fight, a warning, a song, and a lecture.

First things first, the story is so weak that the audience will be able to predict the scenes that are coming in the next ten minutes. The face-off between the protagonist and the antagonist is established in a very old-fashioned style. In extreme liberty of coincidence, everything falls in place for Nithiin to trouble the baddie. The irking part is that the district collector gets attacked for every two scenes and he too gets used to beating the goons in the air.

The love track between the lead pair appears forced and boring. It does not take much time to realize that the induced love track is just there to introduce the hero to the villain. Also, the standard dialogue from the hero’s mother asking him to bring her ‘kodalu’ back home leaves the audience in a facepalm.

The first half is dragged so long with the so-called entertainment part where Vennela Kishore takes charge. A very talented actor like Vennela Kishore is given to bring laughs with cringe comedy. He could not help but irritates the audience whenever he appears. The sad part is that the ego-centric comedian role enters the second half because the director could have thought of entertaining us there too. The comedy part could have been cut down, not that it makes the movie any better but to save some time for the audience.

It was proven in the recent past that the audience gets attracted to mass masala movies when served in an interesting narrative. That does not mean that an extremely boring narrative like Macherla Niyojakavargam can win accolades.

The only two brief parts of the movie that relieves the audience are Kamal Haasan’s ‘Vikram’ reference by Nithiin with BGM and ‘Ra Ra Reddy’ song with the steps from yesteryear’s Jayam song.