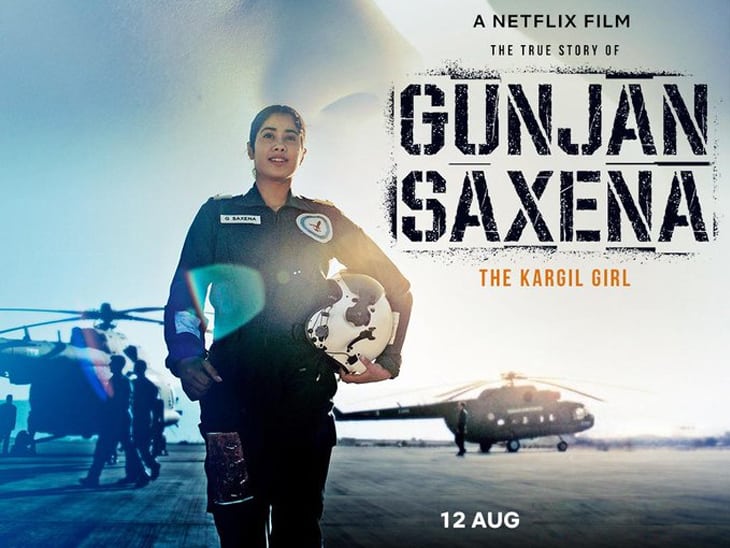 Gunjan Saxena is a biographical film based on the life story of the first Indian female air-force pilot in combat. The film is set in the backdrop of the Kargil War, but it isn’t a war film. It is about the battle that a woman has to face in this male dominated world to realize her dreams.

Gunjan Saxena (Janhvi) always dreams of becoming a pilot. But it is too expensive an affair for her family to get her admitted into the pilot course. So, she decides to join the Air Force. She overcomes all hurdles that come in her way and get into the Air Force. But it isn’t easy for the only woman to stand her ground amid men that firmly believe that it is not the place for a female.

Janhvi Kapoor is successful in portraying the emotions of Gunjan Saxena in a very effective way. She is particularly impressive in the scenes where she is subjected to extreme discrepancy at the workplace. Pankaj Tripathi is the pillar of strength not just to Gunjan’s character but this film. He keeps his character Anup as simple and as realistic as possible without any drama. His understated performance is one of the major strengths of Gunjan Saxena. Among other roles Angad Bedi and Vineet Kumar Singh make their presence felt.

Director Sharan Sharma had a clarity of thought while co-writing and filming Gunjan Saxena. He is aware that he is not making a war movie that glorifies a female pilot that has made the nation proud. He wanted to show her journey towards becoming an achiever. The odds she had to combat before becoming what she had. Sharan Sharma’s direction is superb and there are many scenes that will be applauded by all women and sensible men.

Amit Trivedi’s music is on point and the cinematography is splendid. Editing is crisp without any wasted moment. Production values are good. Combat scenes should have been more authentic as they look staged and comical to an extent.

Gunjan Saxena is the story of the first Indian female air-force pilot in combat, but it seems like the story of every woman, who has dreams of achieving something, especially in our country, where women are still considered as homemakers by many even now. The director and writers were pretty clear about what they were telling. They don’t want to show the valour and patriotism that Gunjan Saxena has shown in the Kargil War. Their focus is on showcasing the journey and emotional stress that she has to overcome to realize her dreams.

Take the Kargil War and the Air Force backdrop out, Gunjan Saxena is like every other story where a girl gets unconditional support from her father and is pulled down by everyone else. Although there are many women working in various jobs that were previously considered to be the place for men, there are fields that still don’t see many women around. Gunjan Saxena was one of the first women to be recruited by the Indian Air Force and the film effectively showcases the discrimination she had to face at the work place.

Imagine the plight of a lady who doesn’t have a separate bathroom or a changing room and is surrounded by hordes of men. The men simply cannot accept a woman as their colleague and try to chase her away and break her soul at every given chance. These portions of the film are masterfully crafted without getting melodramatic. Another biggest asset to the film is the father-daughter bonding that has made some ordinary scenes create a solid impact. There is only one lengthy scene that shows what she actually did in the Kargil War.

This film is not about patriotic dialogues and chest thumping slogans to hail Mother India. There is a beautiful scene where the writers say what patriotism truly means. It is a slap on the face of people who think shouting ‘Bharat Mata Ki Jai’ makes them patriots. Gunjan Saxena has a few weaknesses and in-the-face scenes that portray male chauvinism, but is enjoyable, emotional and immensely satisfying on a whole.