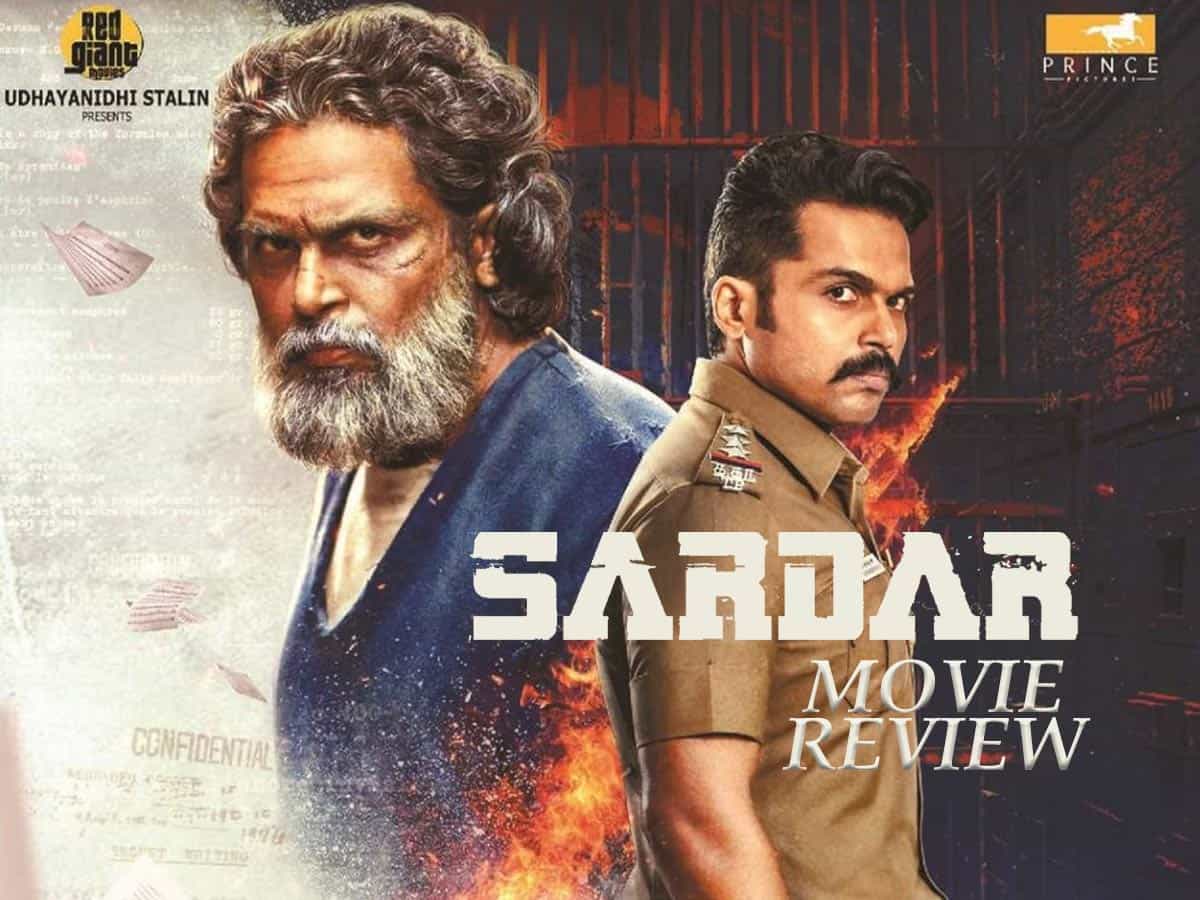 Karthi is known for picking up interesting scripts and challenging roles. He has teamed up with director PS Mithran, of Abhimanyudu fame for a spy thriller. For the first time in his career spanning 15 years, he has done a father-son dual role. The film raises curiosity with its content, thanks to the lead actor’s look. Here is the review.

Vijay Prakash (Karthi) is a publicity-hungry cop who is chasing high-profile cases. He gets the national-importance case of a missing file that is connected to an espionage spy Sardar (Karthi) who is prisoned in Bangladesh and branded a national traitor. The file has the interest of the owner of the water project. The water company wants to control the water supply across the country through ‘One Country One Pipeline’. It is also the cause for the deaths of 1000s of children every year. Who is Sardar and what is his story? How does he stop this dubious water project?

Karthi delivered a praise-worthy performance as Sardar. He got under the skin of the character so well. In fact, he reminds us of versatile actors Kamal Haasan and Vikram in donning such myriad roles. He delivered a topnotch show in the action episodes. He also impresses with his role Vijay Prakash where he scores points in fun and emotional scenes. His comic persona was too good.

Rashi Khanna as Shalini is decent. She doesn’t get enough screen time to shine. After Liger, Chunky Pandey is seen as a baddie Maharaja Rathore. He does his part well. Rajisha Vijayan as Sardar’s wife is impressive. Laila as Sameera gets noticed.

Child actor Rithvik shines in the role of a smart and intelligent kid Timmy. He is a treat to watch till the end where he aids Sardar and refers to him as ‘Partner’. Timmy’s role is crucial and drives the story forward. The film has an ensemble cast and all the cast is a game on and does their best.

Sardar is a familiar espionage spy story on paper involving father and son. But Mithran has written an impressive screenplay that made it better, bigger and engaging. Gorge C William’s visuals and GV Prakash’s background score are appealing. Production values are lavish depicting the grandeur of the film.

Director Mithran had made an impressive debut with Abhimanyudu which was an action techno thriller based on hacking. His second film was Hero (2019) based on the education system that was even more lecturish. His third directorial is an espionage spy thriller touching upon the commercialisation of water and its packaging. The scale gets bigger. Karthi makes it even more engaging with his powerful performance. The film’s first half is terrific. The way the film mounts and the way the story is unravelled makes it thoroughly engrossing till the interval.

Sardar has some brilliant episodes which give edge-of-seat experience. Be it the flashback scene how he manages to enter into Pakistan’s base camp or the Chittagong jail scene where Sardar fights other inmates or the Sardar’s escaping sequence from the prison were all shot well. The climax episodes were a bit draggy yet it would appeal to action lovers.

The problem with Sardar lies in its preachiness on packaged water and its disadvantages. It gets repetitive at portions. Director jumps to a conspiracy around plastic water bottles and it’s overdone at times in the film. The hero and heroine lack chemistry. Their love track is pretty weak and it looked forced. Heroine Shalini (Rashi) is a lawyer whose client is Sameera (Laila), barring this her role hasn’t had much substance.

Sardar caters to both aficionados of spy films and action genre. It is an action-packed spy thriller that hits the right chords to the genre lovers. It is watchable for the big screen experience.