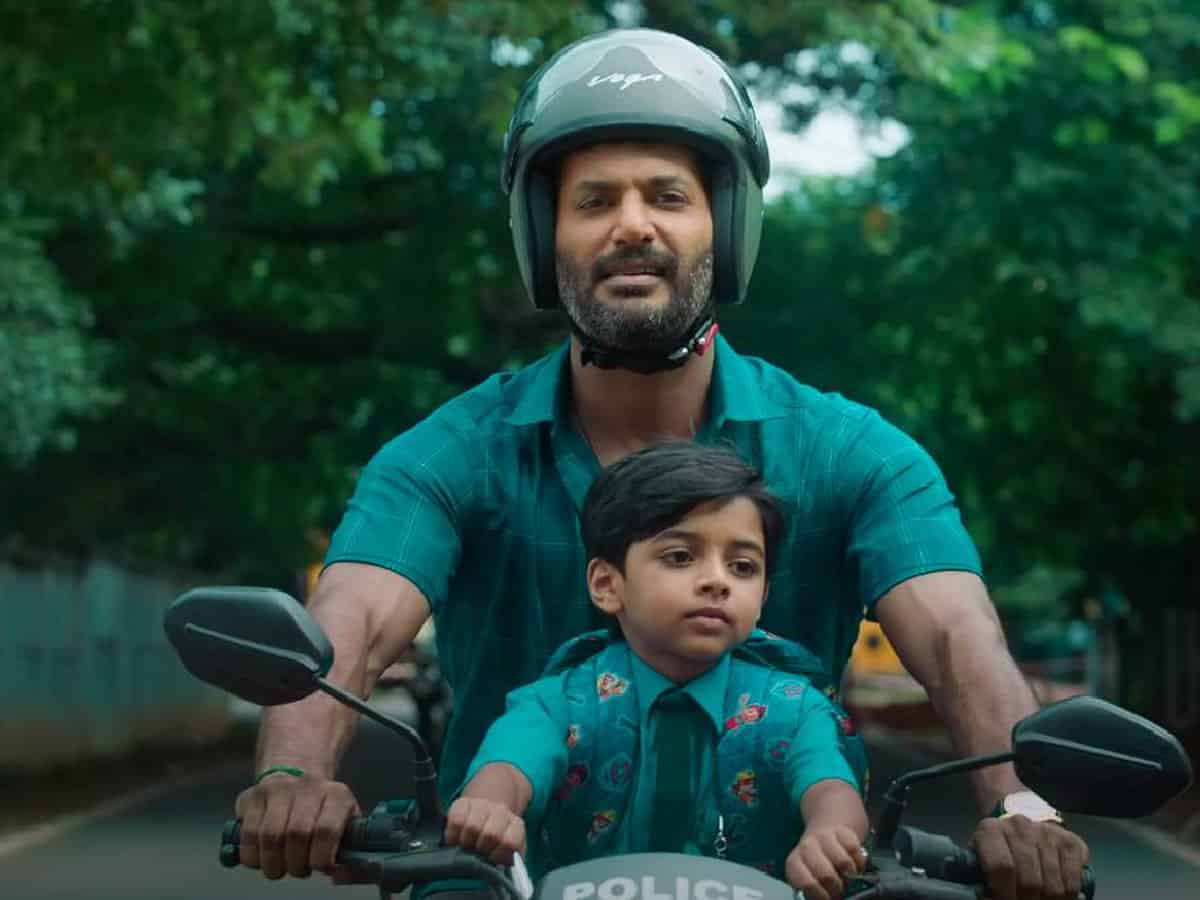 Cast - Vishal, Sunaina, Prabhu and others

Vishal’s claim to fame in Telugu was Pandem Kodi. He couldn’t recreate such magic again even with Pandem Kodi 2. But some of his previous films like Detective and Abhimanyudu had done moderately well in Telugu. And many of his recent films turned out to be disappointment. Despite all this track record, Vishal is keen on releasing his films in Telugu regularly. He is now back with a cop drama Laththi. Will Vishal make comeback? Check out.

An ordinary police constable Murali Krishna (Vishal) gets suspended in connection with an issue. Upon rejoining, he beats influential person (son of a don), not knowing his identity and again lands in trouble. The egoistic don and his son don’t want to leave Murali and family. Murali is forced to confront the goons and protect his family from them. However, Murali and his 10-year-old son get trapped inside an under-construction building surrounded by the villains. The two must find a way to escape with their lives.

Vishal justifies his role as an innocent constable. Vishal’s wife (Sunaina), a nurse and doting wife, is alright but only confined to the first half. She gets sidelined in this hero-centric film. Veteran actor Prabhu is seen in a small role which doesn’t have a strong connection to the story. Ramana as Veera is a proud baddie and son of Don Sura (PN Sunny). The villains are let down in Laththi as they’re not prominent faces in Telugu. Child actor Lirish Raghav is good as Vishal’s son. He is part of the crucial episodes in the film.

Laththi has a very thin point. It is usual cop drama between an honest cop versus dreadful villain. Director Vinoth failed to deliver an interesting story. Yuvan Shankar Raja’s songs are not appealing and they have a lot of Tamil flavour. Background music is good though. Visuals are effective. The film drags due to lack of a compelling story.

Thumbs Up
Vishal
Some Action Scenes

Thumbs Down
Weak Conflict
Over The Top Scenes
Second Half

Director Vinoth Kumar chose a wafer-thin point and tried to weave a story around it. But it is a very old cop story that’s done to death. Basically, Laththi is around ego of the antagonist who decides to take revenge on the since constable.  The scenes were so predictable. The first half is a filler and the real story begins after the villain identifies the hero. Ironically, the clue comes from the mobile ringtone based on which the antagonist identifies Murali as the cop to take revenge on.

The second-half is supposed to be a gripping and edge-of-the-seat thriller. Whereas the logics goes for toss when the protagonist and his son gets trapped in a building surrounded by hundreds of enemies. One and only Vishal takes on all the hundreds with some bruises on his body. This is unrealistic and filled with the over the top scenes. Laththi is marred by weak writing and too much cinematic liberties. The audiences lose the interest since they don’t connect much with what’s happening on the big screen. Lack of prominent faces as the villains is also let down in Telugu.

This is another big fat bore commercial cinema with Tamil flavour. Even the action lovers doesn’t have moments to relish on. It is Vishal’s Laththi charge on the audiences. Better to stay away!