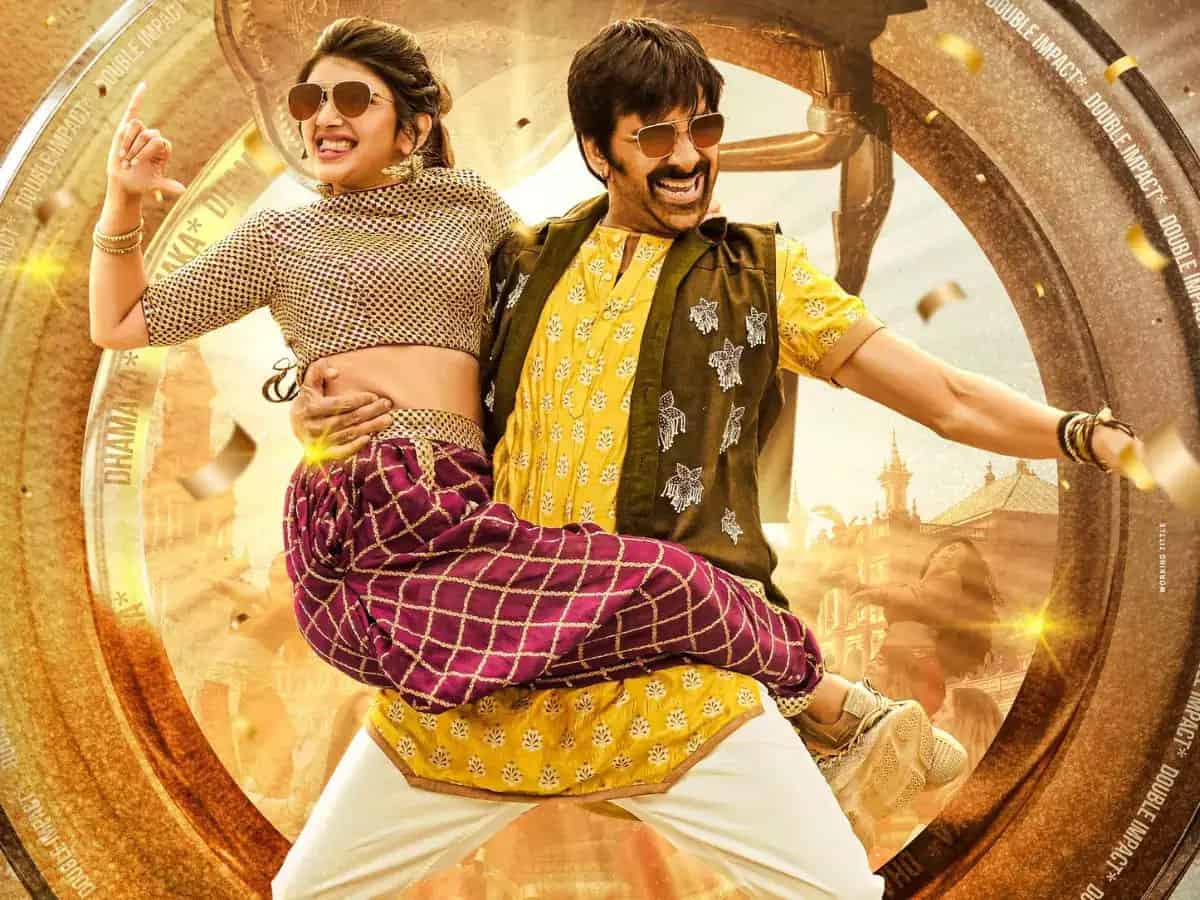 After battling with failures, Ravi Teja made a strong comeback with Krack. However, his subsequent films Khiladi and Ramarao On Duty turned out to be disappointments. He now banks on Trinadha Rao Nakkina’s mass masala Dhamaka. Will Mass Maharaja entertain? Let’s check out.

Swamy (Ravi Teja) is a common man and son of Vasudeva Rao (Tanikella Bharani). He gets into fights and loses his job. He meets Pranavi (Sreeleela) and proposes to her. Anand Chakravarthy (Ravi Teja) is son of billionaire businessman Nanda Gopal Chakravarthy (Sachin Khedkar). Anand is considered for Pranavi. Pranavi likes both Swamy and Anand, but is confused about whom to choose. Anand’s company is in trouble due to a corporate baddie JP (Jayaram).  What’s the connection between Swamy and Anand? The film is about how the company and families are protected from JP.

Ravi Teja as Anand and Swamy get very stereotyped roles which is tough to see him. The film banks on him, but he can’t pull this off. Sreeleela is a big asset for this mass potboiler. She oozes her glamour easily and sizzles the screen. She does magic in songs. Tanikella Bharani as a middle-class father is alright. Sachin Khedkar is the helpless businessman whose company is going out of his hands. Jayaram is shown as routine villain. Rao Ramesh as Sreeleela’s father gets the greedy father role but his character has less seriousness and more fun. Hyper Aadi’s comedy is not fulfilling. Praveen gets wasted. None of the characters leave a strong impact.

Director Trinadha Rao got a big ticket chance to direct star Ravi Teja. Despite having Mass Maharaj, director fails to use the opportunity as he ends up choosing a lackluster commercial potboiler. Bheems’ energetic music works in the film’s favour. Visuals are eye-candy. The only blessing in disguise is the rich making and production values, the producers have splurged all over on a weak script. Songs are well shot.

Ravi Teja and mass are synonymous. So, he chose a film that has no potential to work. It is totally dated. It is 90s film made by Trinadha Rao Nakkina with a routine treatment. Weak script, predictable scenes, streotype characters and bad humour make Dhamaka a Dhamaal.

One wonders what made Ravi Teja sign Dhamaka, probably a big fat pay cheque. The film is on familiar note with no fire works. In fact, the film reminds us of Allu Arjun’s Ala Vaikunthapurramuloo with Ravi Teja playing the dual role as Raju & Bantu. Thus, the mass masala film badly misses on many counts.

Ravi Teja mercilessly beats the goons like in any commercial protagonist.  It is his energy which makes us sit through the entire film hoping for some miracle at the end. But no where one finds miracles. There is a small twist in the first half which also doesn’t work much. Once the cat is out of the bag, the film doesn’ have anymore twists or interesting elements saved for the second half.

The songs, though interrupt the story flow, give some relief in this badly written script. Thanks to Sreeleela again. She scorches the screens with her dance moves and short-skirts. It is a treat to watch her explode. The high-octane action scenes are meant for the genre fans. Dialogues also go overboard as they sound artificial. Indra-inspired scenes of Rao Ramesh & Ravi Teja and spoof of some other popular scenes from old films didn’t work at all.

The villain who was shown as smart and intelligent gets fooled which isn’t shown convincingly. These act as fillers. It is a weak point which is dragged till the end. The story and scenes are predictable. The production values are impressive. On the whole, Dhamaka leaves totally disappointed. It is a routine commercial potboiler with no surprises and no thrills.