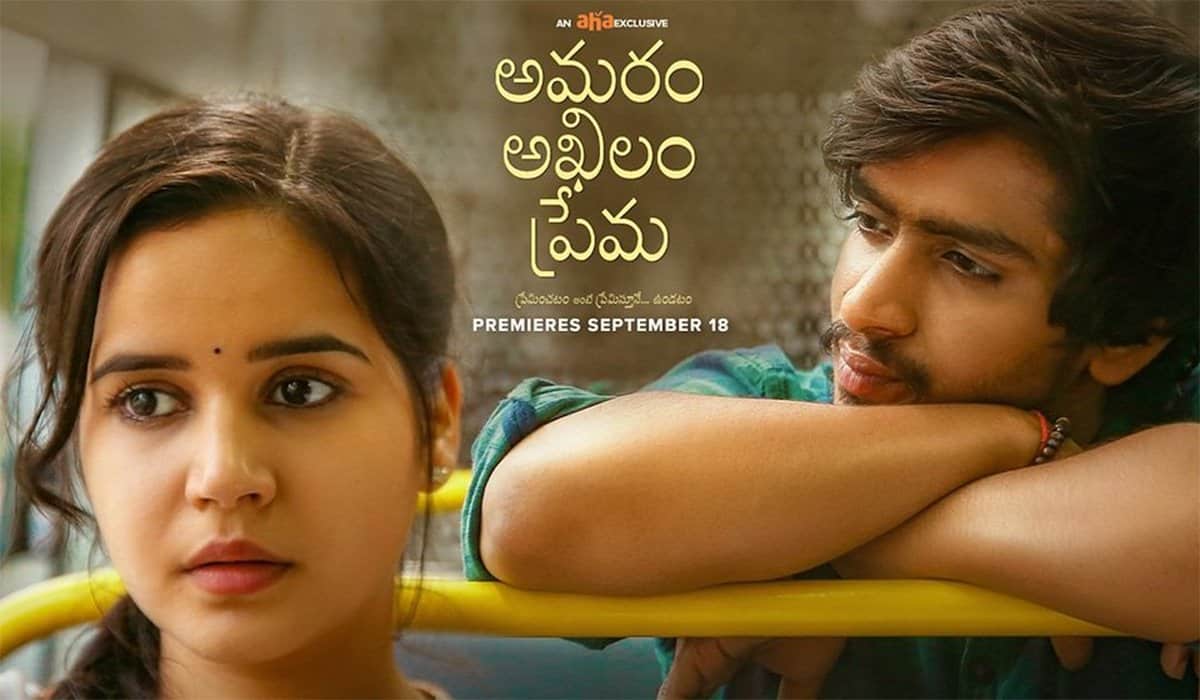 Amaram Akhilam Prema is the latest Telugu film to opt for direct to digital release and it is now streaming on Aha. It has a relatively new star cast barring a couple of familiar faces like Naresh, Annapurna and Srikanth Iyengar. It is a regular love story with usual tropes but has its heart at the right place. The director’s take on romance and the bonding between a father and daughter is worth a stream.

The movie’s basic plot reminds us of Nuvve Nuvve and Aakasamantha as it primarily focuses upon the bonding between a father and his daughter. How this relation gets strained when a third person enters between them and the daughter breaks her father’s trust is what Amaram Akhilam Prema is based upon. Despite a familiar setting, AAP has strong emotions and credible performances to make it a decent one-time watch.

The film takes its own sweet time in the beginning though. An aimless guy dedicating his entire time to run after a girl and stalk her at every corner is stretched beyond a point. The director couldn’t come up with fresh ideas in building this romance. The boy going to the girl’s house as a cable mechanic, admitting her to the hospital when she is ill, and sending cakes and bouquets on her birthday night make it look like an old-fashioned take on romance.

There’s more to it. The girl overhearing his feelings for her and reading his diary before falling for him is so ‘supergoodmovies’ kind of love story. Thankfully, the scenes are crisp and the story moves at a brisk pace with impressive dialogue. The girl’s flashback also doesn’t take much time but establishes the conflict well. Shivshakti Sachdeva’s performance in the sequences where she decides to give up on him in the hope of winning her father’s love again is impressive. These scenes would not have worked if she couldn’t express the pain and conflict that she is going through.

The movie would have been far more impressive if the male lead also could act. But Vijay Ram neither has the looks nor the acting prowess to pull it off. Srikanth Iyengar as the girl’s father is the major asset of Amaram Akhilam Prema. It appears his character is being impractical and insensitive towards his daughter, but Srikanth makes it look convincing in the scene where he overcomes his ego and breaks down.

Credits to the dialogue writer for crisp yet impactful dialogues written for Annapurna and Vijay Ram in the penultimate sequences. Also, there’s around a ten-minute lag in the climax portions that could have been edited out. Radhan’s music is passe. An emotional love story needs a better soundtrack. The cinematography is neat. Production quality is alright, but most of the padding actors give that short film vibe to it.

On a whole, Amaram Akhilam Prema is not a must-watch, but it will keep you fairly invested in its story when you play it. It is far better than many ludicrous low budget movies that were out on streaming platforms in recent times.