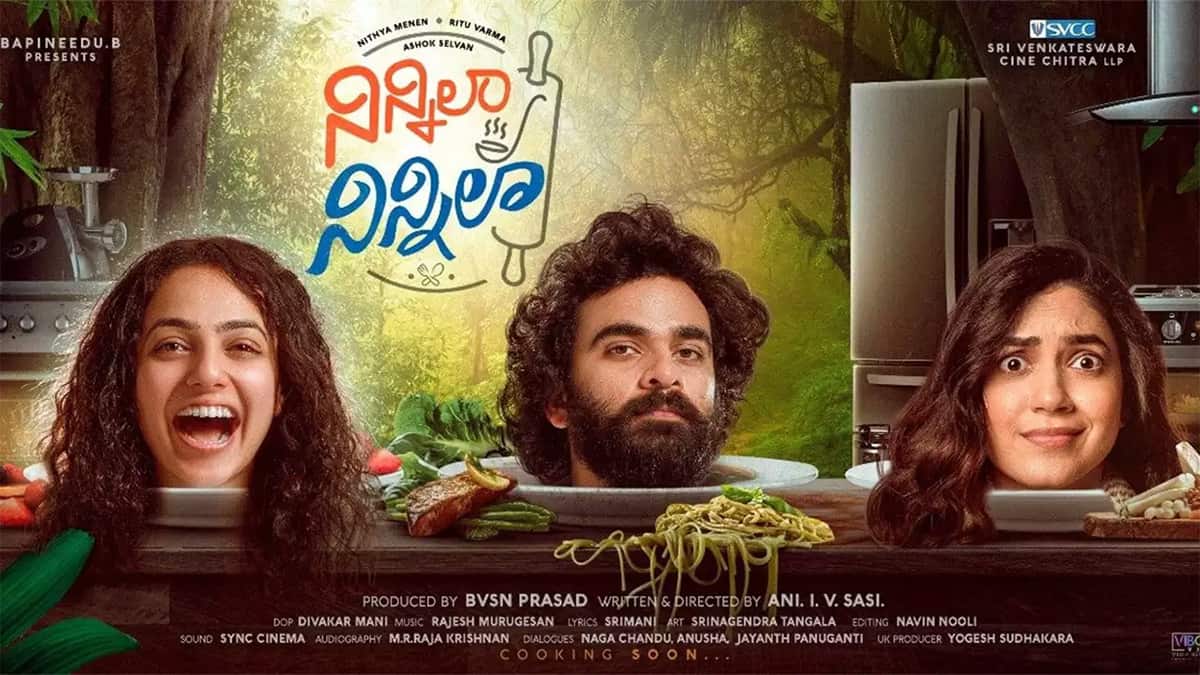 Ashok Selvan’s name might not ring bell in Tollywood. Shot to fame with Soodhu Kovvum and Pizza 2, he is now testing his luck in T-town again with Ninnila Ninnila. The movie has known actors Ritu Varma, Nithya Menen and Nasser playing important roles. The film is streaming on Zeeplex. What is the film up to? Check out.

Dev (Ashok Selvan) is suffering from muscle spasms and insomnia due to which his life is turned upside down. He starts his career as a junior chef at a famous Indian restaurant Amara in London. There he meets fellow chef Tara (Ritu Varma) who has an OCD issue. Tara worships the Head Chef (Nasser) to the core and blindly follows the Head Chef’s recipes without any deviation. Dev differs with Tara. Head Chef, the renowned Chef, had stopped cooking long back. Why did he stop cooking? What is his personal issue? How Dev and Tara are part of Head Chef’s world forms the crux of the story.

Ninnila Ninnila has brilliant performances. The performances were subtle yet sound. Ashok Selvan, Ritu Varma, Nithya Menen and Nasser all have played their parts well. This will go down as a film with flawless acting. Kudos to the team for taking up roles that have imperfections in their lives and yet they all handled it well.

Technicalities:
First things first. The film has a very thin plot. It hardly has a story. Writer-director Ani Sasi isn’t a great chef as he cooked a story that lacks freshness.The film banks on the performances. The cast has pulled off the film on their shoulders. The screenplay is also flat and predictable. Yet the music is a big asset that rescues the film. Emotion has been carried out through out the film. Although the film has a run-time less than 2 hours, it feels lengthy. Cinematography is neat.

Set in the culinary world, Ninnila Ninnila revolves around food and emotions. It has some drool-worthy moments. But that is not enough to fulfill the hunger of movie lovers. The film forces you to crave for more. Lack of story is the big let down. Adding to the woes, the film lets us down with the dead-slow narration. The film is predominantly shot in indoors. Scenes take place in kitchen, restaurant, house, hospital et al. There are only few outdoor scenes.

Each character in the film has an issue. For example, Dev has health issues. Tara has OCD and Head Chef is left alone after his wife and daughter abandoned him. These make us connect with the on-screen characters. Their issues have a common point. The film has a flashback that is unconvincing and puts us off. Maya’s role could have been dealt well. The film has songs which are shot well. But they obstruct the flow of the story.

Tara has affinity for Gold-crusted fish – the trademark dish of Head Chef. There is some personal connection to it which you’ll get to know at the end. The film is totally filled with food, dishes and recipes. It is hard to connect to food and the film. But the emotion and strong performances are saving grace. One doesn’t understand why the film is called Ninnila Ninnila. Perhaps, only makers know it. If we consider the film as a food, it is half cooked.