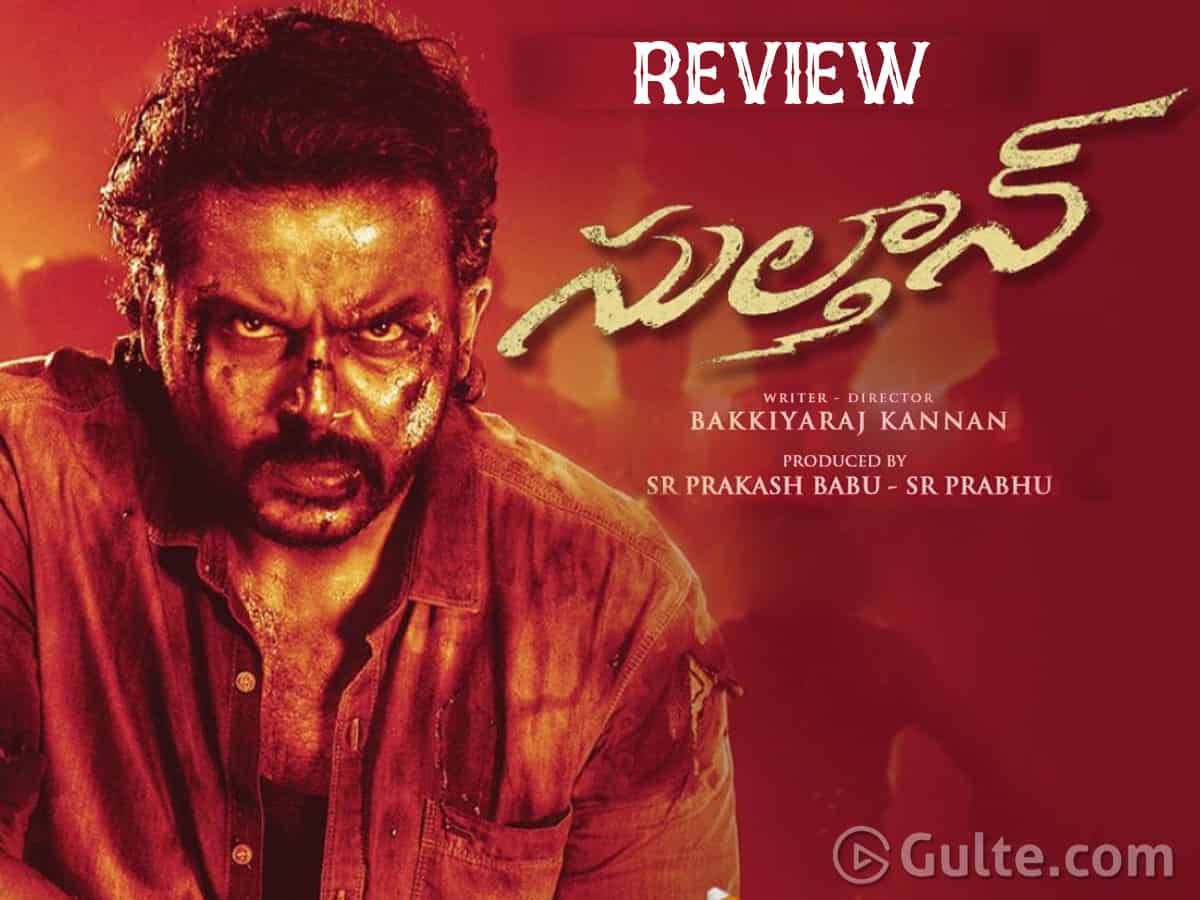 After Khaidi and Donga, Karthi is back with an action-packed mass masala film. When films like Uppena and Jathi Ratnalu got thumbs up from Telugu audiences in the post pandemic era, will Karthi’s out-and-out massy attempt work? Can it become what Krack is for Ravi Teja? Or it fizzles out?

Vikram aka Sulthan is a robotics engineer in Mumbai who aspires to set up his own firm. But destiny has different plans. He visits his village in Visakhapatnam to meet his father, a rowdy leader and extended family – a gang of about 100 whom Sulthan calls as ‘brothers’. His father (Napoleon) promises to save a village of farmers in Amaravati threatened by local don. But he breathes his last. Karthi, unknowingly, goes to the village and learns their plight and ends up in standing up for the village. How does Sulthan protect his army of 100 brothers and fight against the goons and save the village forms the crux of the story.

The role of Sulthan is heavier for Karthi. It is too early in his career to do such a heavier role. In Telugu, one needs a mass hero to pull off such a heavy subject. Otherwise, Karthi has done a decent job. Rashmika is okay as a village belle. She lacks scenes that elevate her character. There are not enough love scenes between the lead pair to establish their relationship, barring the cause of the village. Lal as uncle Mansoor gets a positive role and he delivers. Yogi Babu’s fun works in portions. KGF fame Ramachandra Raju aka Garuda gets a powerful entry as villain. But just after one fight, he is no where in the film till the climax fight. He tries to justify with a dialogue, but he is shown as a weak villain which isn’t justifiable. Main villain Nawab Shah just fills the spot. He doesn’t offer any value to the film. The Sulthan’s 100 brothers have done a neat job.

Writer-director Kannan has failed to deliver an engaging action-packed film. At many portions, the film loses the balance. It returns but it is not enough to sustain the momentum. The makers made a mass masala film and tried to make it look like a package. But it is not a well-package. Songs are damp squib and they often obstruct the flow of narration. Especially the romantic song between Karthi and Rashmika right after the latter accepting the former’s love proposal is not in good taste. The Tamil flavour is also clearly visible which makes Telugu audience disconnect to film at times. Yuvan Shankar Raja’s background score is the big asset for the film which elevates the scenes. But it can’t rescue the film. Editing is poor as the draggy scenes were not chopped.

The protagonist saving a village for his father’s promise is too routine. The plotline is as old as the hills and rocks that are shown around the village in the film. The motive of the villains for the agricultural lands is also not convincing. The villain wants the lands of this village for his iron mining which is worth 10,000-Crore. All these make Sulthan a cliched story. Writer-director Kannan made Sulthan a routine commercial potboiler that lacks punch.

The episodes of police commissioner and Sulthan are hollow. Police boss threatening to encounter Sulthan’s brothers and Sulthan trying to save them is dealt poorly. Sulthan has some moments. Some funny scenes in the first half and the well-shot action episodes give a treat to action lovers. But the film on a whole does not live up to all the hype of the protagonist. The problem with Sulthan is that its antagonists fail to challenge the hero. Barring killing uncla Mansoor, the villanism in this hero-centric film is cornered, weakened.

Let alone villains, even the Sulthan’s 100-member army also can’t match his strength. Sample this. Stout, well-built body builder Michael doesn’t win in a fight with Sulthan. This fight episode is unconvincing and unwarranted totally. The rift within the Sulthan’s army, leaving Sulthan alone in a trouble and they just returning at the climax after learning the truth are all cinematic liberties. It is pretty evident that director Kannan wants an unrealistic approach in elevating Sulthan’s heroism. The build-up scenes are overdone and irritates the viewers at times. What is ironic is that the main villain often describes himself as Raavan and also describes Sulthan as Raavan, errr with 100-heads. Ideally, Sulthan is Rama who stood up for Dasaratha’s promise and fights for a village which he has no connection with. Still, the villain calls him Raavana.