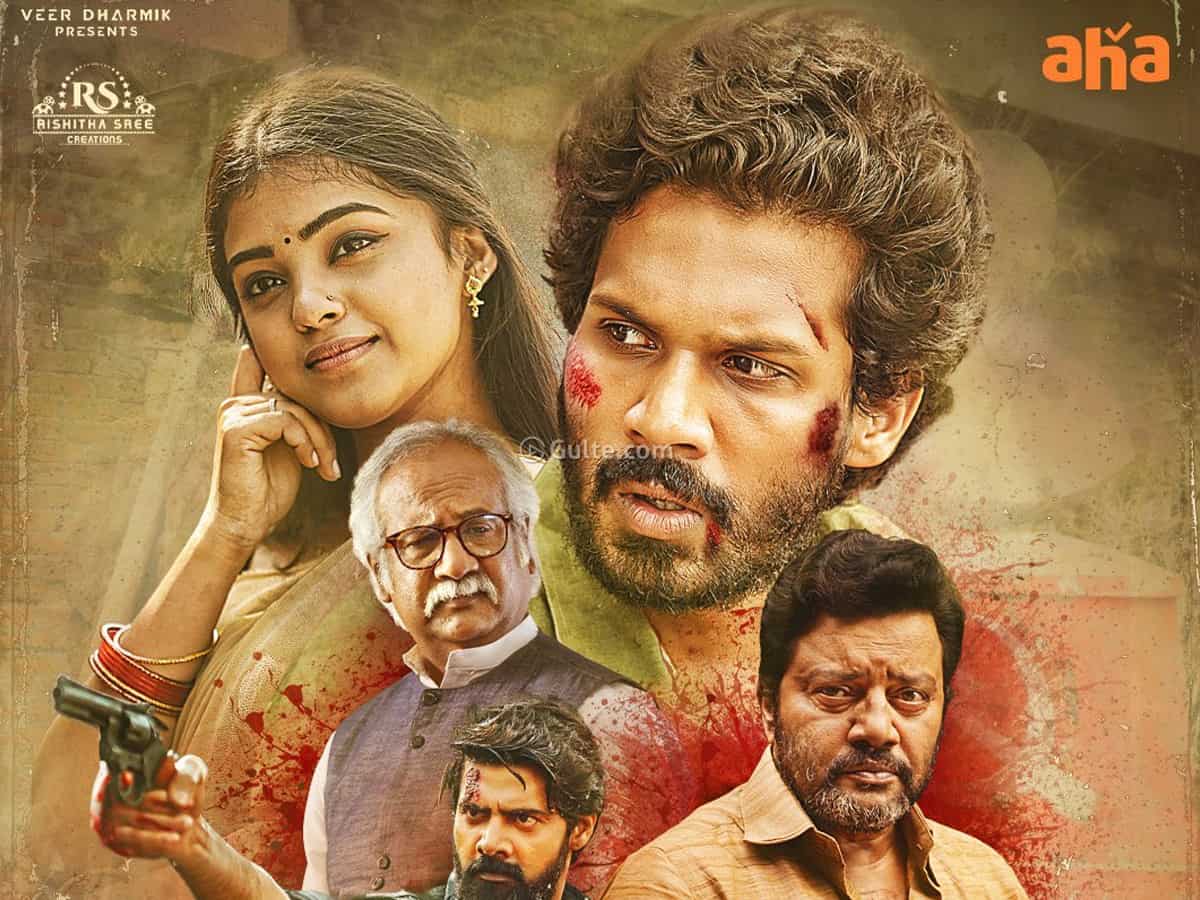 In a story of the early 2000s, a lower-casted young man Krishna (Karthik Rathnam) falls in love with his childhood crush Pushpa (Krishna Priya), who is the daughter of an upper-caste Ex-Maoist Ramanna (Sai Kumar). Ramanna tries to enlighten the people through folklore performed by his daughter.

A small conflict triggered by Krishna and his friends due to the love affair, snowballs into a giant caste war in the village leading to many unexpected incidents, leaving many unanswered questions. When Ramanna is caught between the ideologies he believed all his life and the casteist inside himself, his decision and the consequences thereafter form the story.

Karthik Rathnam of C/o Kancharapalem suits the character and he performs fine. He is choosing offbeat characters mostly and he does justice to them. Debutante Krishna Priya as Pushpa is okay. Sai Kumar as Ramanna excels in his role. This is just a cakewalk for him.

Raja Ravindra, Pavithra Lokesh, Aamani, and Pithamagan Mahadevan are fine in their respective roles. Naveen Chandra did well with his character as an ethical but helpless police officer. He often gets sandwiched between political pressure and sensibility.

Ajay and Subhaleka Sudhakar appear as high-ranked police officer and politician respectively. The conversation between them is thought-provoking and engaging. They both did well in their respective roles. Late actor TNR appears in a brief role. Suhas did a blink-and-miss role.

Ardha Satabdham is a story with Telangana’s Siricilla backdrop sometime back in the early 2000s. The language, attires, and properties used were apt.

Though a song or two are melodious, they turn speed breakers as they were used to show the love story in Krishna’s daydreams.

Editing could have been better. Dialogues are good. Cinematography is fine. The movie appears a bit slowed down in the beginning before the actual plot unravels. The massacre scenes could have been shot a little better.

Cuss words were used liberally, but they don’t appear irrelevant with the narration and storyline.

Songs
Lag in first half

Ardha Satabdham is a story based on deep-rooted castism that still prevails and throws up unanswerable questions even after five decades of independence. The director tells us a story of democratic violence where the oppressed and the oppressor get destroyed at the same time.

A lower-casted young man who thinks his childhood crush is loving him gets into a scuffle with an upper-casted man, which quickly escalates into a bloody caste massacre in the village. Things easily get upscaled with pre-existing discrimination in society.

The politician’s order to put down the girl and the boy is a classic example of political violence. The politician’s justification on why the people won’t change and how the constitution is being used is well written and performed.

The director points out that no one ever understood the true meaning of liberation and independence even after five decades we earned it. The crucial conversation between the SP and the politician emphasizes how the constitution is being used by many to keep the oppression alive. To underline modern Indian society’s discrimination, the politician brings up the Karamchedu massacre. Some powerful lines like ‘Caste is the constitution that is unwritten yet unerasable’ are well written.

Apart from the political angle that demands the encounter of the boy and the girl, the role of the girl’s father is neatly written. When heard about his daughter eloping with Krishna, Ramanna gets caught between his casteist himself and his ideology that does not believe in the caste system. The struggle within himself at that point and the bitterness when he is left helpless with the caste taking over everything he believed and loved, is very well shown.

The director shows how the system fails before the caste, even when the political violence takes a step back and when the casteist father realizes the fact.