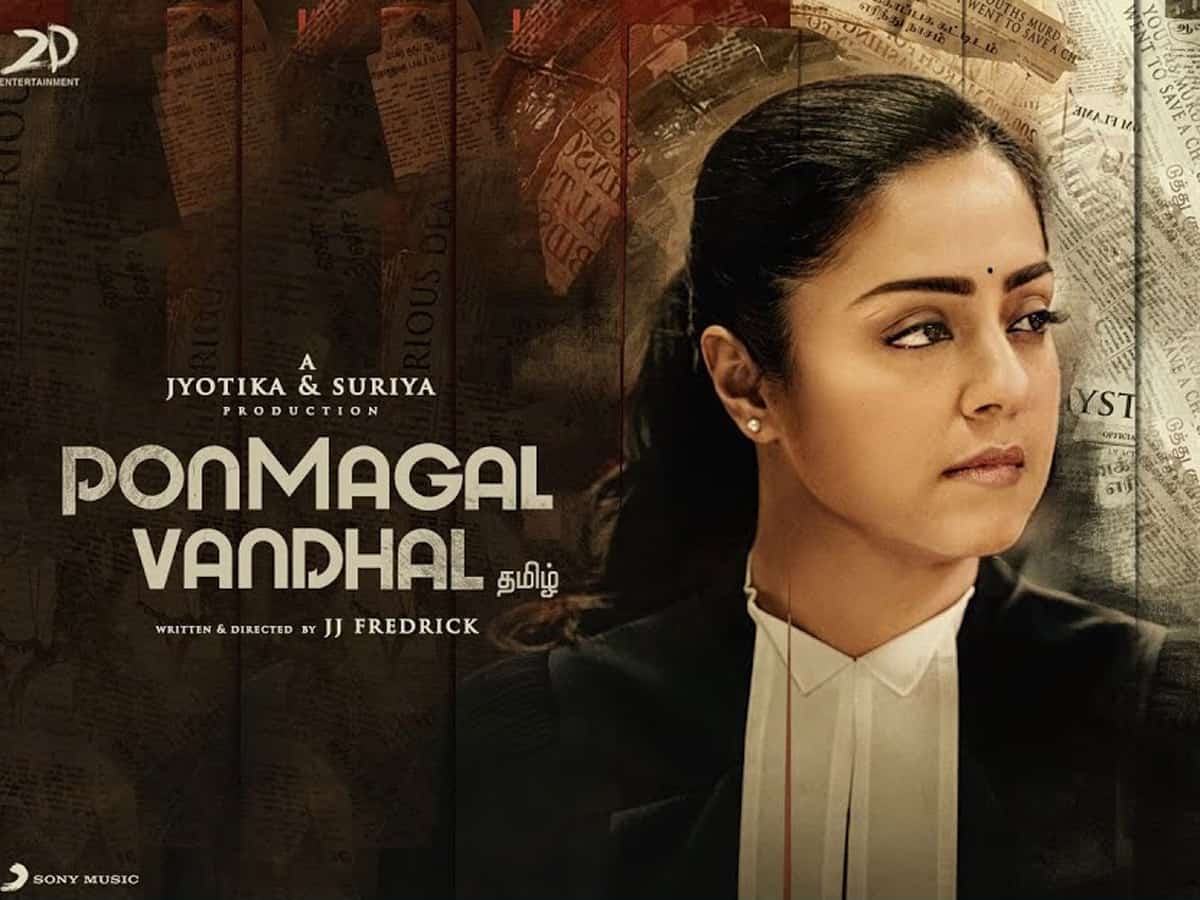 Ponmagal Vandhal produced by Tamil star actor Suriya has been in the news ever since he decided to go for digital release. Against all odds, Ponmagal Vandhal is streaming on Amazon Prime from today.

Venba (Jyothika) takes up a closed case where a woman was labelled as ‘Psycho’ by the system. Venba digs up the case and presents a few facts to get the court’s attention. A politician (Thiagarajan) puts a successful lawyer (Parthiban) against the inexperienced Venba. He counters every argument of Venba with logic and fabricate all the facts leaving Venba helpless. How can she overcome the obstacles and be successful in her pursuit?

Jyothika’s stellar performance is the mainstay of this lacklustre courtroom drama. She makes us believe that she had gone through unending pain and suffering through her vacant eyes. She is good in the scenes where she takes on Parthiban with her counter arguments. Parthiban is good in the courtroom scenes. Bhagyaraj is okay in a supporting role. Thiagarajan never seems threatening as the villain.

Fredrick handled the film in nineties style. The exchanges between the lawyers in the courtroom, the way a few women characters react against Jyotika for taking up the case make us feel that we are watching a film that was made two to three decades ago. Fredrick’s writing is the main culprit for Ponmagal Vandhal. There’s potential, but he never tries to tap into it.

Cinematography is good with lush green and mist filled Ooty locales. Music is in tune with the theme of the film. Editing is alright. Production design is neat. Suriya and Jyotika deserves a pat for bankrolling a film with a nice social message.

Remember #MeToo, where many women took to the social media to reveal the dark truths that they had faced either in their childhood or in their workplace? PMV seems to be inspired from those sad tales. The intention behind making this film is commendable. It is an issue that needs to be addressed on such a big canvas. However, the film couldn’t go beyond the ‘honest attempt’ level and create a solid impact on its viewers.

The director should have made it as a realistic courtroom drama than going for commercial template. Like many tales of the victimized women that were ignored due to the lack of evidence, the fight of this protagonist also should have been given a realistic ending, which would have made it a haunting experience. Instead, the director gives it a cinematic ending where the judge just passes off judgment without proper evidence. If there is a sequel to this and the villain gets to appeal in the higher court, he will surely walk free as Jyotika has nothing to prove against him.

The film addresses a burning issue, child abuse that is leaving many girls traumatized for life. However, the writing and direction is so bad that we cannot empathize with the victims. Instead, out emotions get exploited with some painful visuals that could have been done away with. What is the need of showing bleeding girls when we already get the point? At least Suriya and Jyotika should have advised to edit those visuals from the final cut.

Ponmagal Vandhal could have been a riveting courtroom drama had the director put in some thought into the writing. There are sparks of compelling drama here and there, but PMV ends up as a half baked attempt at delivering a strong social message. The film is made for the masses as every main character gets at least one moment to play to the galleries. Ironically, it is out on the platform that is meant for audiences that cannot stomach such theatrics especially when the story is so relevant.