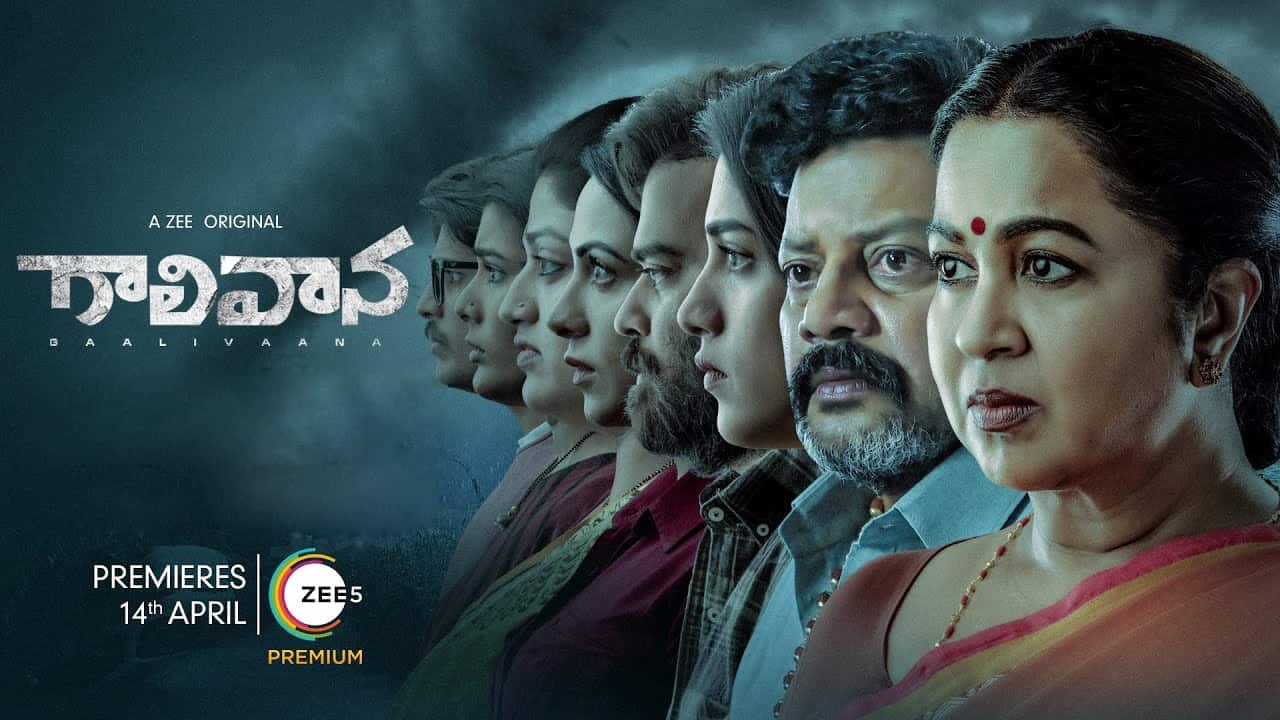 Zee 5 has upped its game in both Hindi and Telugu as it is coming up with interesting films and shows on its platform in the last one year or so. Gaalivaana is their new Telugu web series that has started streaming. The show has Sai Kumar, Radhika, Chandni Chowdary, and Krishna Chaitanya in lead roles and Sharan Kopishetty directs it.

Gaalivaana has seven episodes and starts with the murder of Ajay and Geetha. Ajay belongs to Saraswati’s(Radhika) family whereas Geetha is from Komaraju’s(Sai Kumar’s) clan. The shocking news of murder reaches the respective families and when they are in disarray, they encouunter an injured person named Srinu and save him. But in a shocking manner, both the families fins out that Srinu is none other than the killer who has murdered their kids. Upset with this, they decide to finish Srinu. Things change for the worse as Srinu is found dead the next day. Now, who killed Srinu, what’s his connection with the couple and what happens in the end forms Gaalivaana’s premise.

Senior actor Sai Kumar is the backbone of the show. He gets to play the complex character of a protective father and is superb. He tones down his loud performance he generally does for the big screens and is in tone with the OTT standards. His emotions and the way he goes through character changes is brought out sincerely by Sai Kumar. Radhika also gets a meaty part and was quite authoritative in her approach. Her screen presence and emotional outburst gives the show depth in several episodes.

Chandini Chowdary is impressive as the doctor dwelling her eyes into the case. Krishna Chaitanya, Sharyna Pradeep and Sri Lakhsmi are okay in their characters. Tagubothu Ramesh gets a good role after a long time and he is neat as a cop. Nandini Rai plays the cop and looks a bit diarrayed. She gets things right in a few scenes but her body language doesn’t seem confident in the initial part of her role.

For those who are unaware, Gaalivaana is the remake of the BBC miniseries ‘One Of Us’ from 2016. The makers have adapted the story quite effectively for Zee 5 and set it up in a small town of Godavari district. As the show is set between two families, the camera work needed to be crisp and yet compelling. Sujatha Siddharth does an amazing job as the tone of the show looks intriguing.

Editing was not that great as a few scenes related to the family’s backdrops should have been trimmed. The family drama is filled with repeated scenes which should be trimmed. Gowra Hari’s music was okay but if he would have put more effort on the BGM, the output would have been even gripping. The dialogues, costumes, and screenplay are decent.

As Gaalivaana had noted faces from Telugu cinema, the performances were bound to be good. The show gets it right when it comes to performances and director Sharan should be credited for extracting such beautiful performances. The emotions that these characters go through in times of grief are moving.

The story is the major plus point and how two families go through inner turmoil and handle the key twist at the end is very well planned and executed superbly. Though there are a few repeated scenes, the show comes to an end in a very interesting manner. The misleading factor to confuse the audience has been maintained nicely by director Sharan from the second episode itself.

There are a few flaws like the way these families try to cover up the death of Srinu looks forced. In several other episodes where key changes in the story are brought out, logic is missing. But as the screenplay is gripping these flaws get ignored time and again. What makes the show interesting is not about the regular hunt for the killer but the inner fears of the families and the process in which they get to know about the actual dark secrets related to the murder.

Gaalivaana has a good premise and able performances. The scenes related to family drama look mundane but beneath that, there is also an attention grabbing aspect that is narrated aesthetically making Gaalivaana a decent thriller to watch.